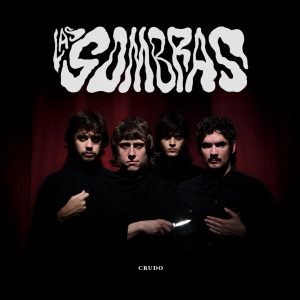 After their successful debut, Las Sombras went straight back in to record their second studio album, Crudo. The band’s previous work was well received by the underground blues youth and there was plenty of opportunities for them to go out on tour right away with their latest material, Crudo visiting the stages of La Pampa, Córdoba, Santafé, and even crossing the border into the rock ‘n’ roll scenes of Chile and Uruguay.

Mario Breuer, the widely known record producer, offered to join forces with them in the making of Crudo, which very much feels like the b-side to the band’s self-titled debut. Although retaining their classic blues/rockabilly aesthetic, this time the band’s melodies sway with raw blue-noted licks and carnal pentatonic variations that are much more romantic than before.

At the start of the album “Espejismo” is nothing less than a groovy invitation to dance to the rhythms of a 50s speakeasy dance club. A good old-fashioned drum line juggles through toms while a rather jazzy brushing of Mauro Lopez’s cymbals is followed by a smooth bluesy bass line. Once finished, we bounce off to “Rocanrol del Idiota.” The intro cuts off towards a more classic rock approach with stuttered strumming on behalf of deviled-fingered guitarist, Nicolas Lippoli, allowing the bass and drums to fill in.

At this point of the album we suddenly find ourselves in the middle of a Scorsese mob scene and it’s time to boogie. Once Julian Pico’s bass line drops, both guitars clash while plucking the same riff. The lyrics kick in surrounded by open chords spiked off a pair of Fender microphones attached to Lippoli’s Telecaster. At the edge of a brawl, each guitar pluck is closer and closer to the moaning of a nerve-wrecking and frenzied outburst.

On a more romantic note, “Nada Más” flirts with open reverb chords backed by raw and clean-cut pentatonic figures to sway around with the fan’s emotions. While touching a nerve or two, the band hits feelings that are locked up in every one of us at those moments where we decided not to act and instantly regretted to do so. The solo pierces smoothly, causing a nostalgic tear or two. By the end of the album “Los Chicos de Tu Barrio”, is on a more up-beat tone, galvanized by a classic rock’n’ roll arpeggio, the members wave goodbye and head off towards the ambiguity of the creative process to once again face the making of another album.