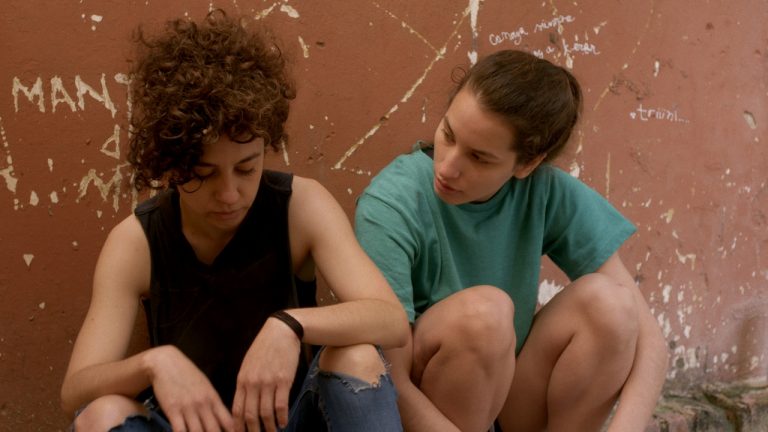 Although several films have explored the LGTBQ+ realm with nuanced political compromise, only a handful of them have achieved something far more complicated: portraying queer existence as an all-encompassing world view that takes over everyday life. One in a Thousand (Las mil y una, 2020), directed by Clarisa Navas – which opened the Panorama section of 2020’s Berlinale – distances itself from other films with similar themes by giving an authentic account of gender diversity as potential and possibility.

Set in the landscape of a Las Mil, a housing project in the province of Corrientes, Argentina, the film portrays a world in which frank and open discussions overcome the middle class bourgeois views on gender usually portrayed by popular artistic media. Here, “el barrio” (the neighbourhood), an expression that in the original Spanish -especially in contexts of socioeconomic disparity- encompasses not only the physical space but also a shared sense of community and cultural codes, becomes the backdrop in which rumours and bodies circulate incessantly. Conversations about daily struggles are tackled with unrestricted openness, naturalising conflict as an essential part of everyday life.

In this context, Las mil y una focuses on Iris, a teenager who plays basketball and likes to hang out with her friends Ale and Darío, two queer brothers who act as her confidents. Beginning early in the film, Iris becomes increasingly interested in Renata, a woman surrounded by an intriguing aura whom she’s never met before. Mostly through outsider’s insight and gossip, Iris learns that Renata is almost a pariah in the neighbourhood, not only because she’s said to work as an escort, but also because of her presumably HIV positive status.

Driven by a flowering desire, Iris rejects other’s accounts of Renata’s seemingly dark past and present and begins to furtively follow her until they have their first conversation on a bus. From that moment on, hanging out around el barrio turns out as the best way of trying to figure out each other’s intentions. In many ways, this relationship challenges the old saying that oil and water don’t mix; Renata, visibly messy, unpredictable, and somehow shady, ends up taking a particular interest in Iris, who, unlike Renata, has little to no experience with sex, drugs or alcohol, describing herself many times as “an angel” (an insistence we could link to her own name -whose meaning is interrogated on more than one occasion during the film-, which in Greek tradition means “the messenger of the gods among themselves”).

Intertwined with this main thread, other stories, such as Darío’s numerous unprotected sexual encounters and their potential consequences, Ale’s exploration of his own sexuality through writing, or the tragicomical accounts of a group of trans friends, weave an overarching queer viewpoint which celebrates life in all its dimensions, good and bad. The film’s uniquely enigmatic title alludes to these multiple edges. From the obvious reference to the One Thousand and One Nights collection of tales and its storytelling potential, to more situated cultural meanings like the name of the neighbourhood where Navas grew up and the film was made. The title also may refer to the plot itself, in which Iris can be thought of as (the) “one” girl among “a thousand” others that Renata frequents, or a popular saying in the country “pasaron las mil y una” (“everything possible happened”) as around every corner, something (furtive sex, drug trafficking, prostitution, encounters with the police) appears to be happening.

The abundance of close-up shots accompanies the characters in their incessant wandering around and reveals the director’s interest to closely registering the spontaneity of emotions and reactions. In that sense, Las mil y una is a film that heavily relies on a peculiar sensibility which oscillates between a caring tone, that echoes in the line “Are you okay?” repeated many times by several characters, and a profound disregard for core areas of wellbeing, as can be seen in statements uttered by both Iris  -“No tiene sentido la escuela” (“School doesn’t make any sense”)-, and Renata -“¿Qué es la salud? Eso es un invento para pelotudos nomás” (“What is health? That’s just made up for morons”)-. These last interventions add a complex layer to an initially celebratory understanding of sexuality and desire, leading to a concerning sense of nihilism that the film carefully avoids to address in a moralising tone, therefore posing a fundamental tension that does not resolve.

Even though this concentration of queer characters could lead some to question the verisimilitude of the film, it is precisely that joyful reunion, the rooted sense of community that emanates from it, what makes Las mil y una a colourful portrayal of what queerness is, but also of what it can be,of its condition of possibility, of the potential driven by the unstoppable force of becoming.

“One in a Thoursand’ is now showing on MUBI