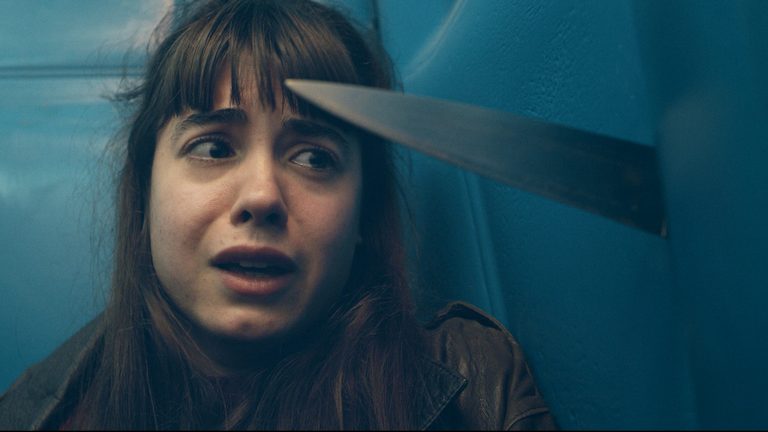 Camila Vaccarini in 'The Funeral Home'

The Argentinian film The Funeral Home (2020, original title La Funeraria) opened in select virtual theatres in USA and Canada on 29 January. It is the directorial debut of Mauro Iván Ojeda, who shows a promising grip of the horror genre, even if through a formulaic film that resorts to every expected cliché.

The Funeral Home kicks off well, kudos to photography director Lucas Timerman, with images from a moving camera which roams through a dark house and shows us a first glance of the characters we’ll be spending nearly one hour and a half with. It sets the spine-chilling tone that the film will attempt to sustain throughout the following scenes.

However, here lies its main flaw: The Funeral Home jumps straight into artifices to keep the audience on the edge of their seats, without taking the time to build up the suspense. It does not present its characters or even a storyline before attempting to instill fear in the audience with its ever-present eerie score by Jeremías Smith.

At times, The Funeral Home is effective in making the audience jump, but misses the mark for not taking us gradually to a place of undisputable and unescapable horror. It doesn’t show its characters going from a place of light into the darkness: they’re already in a pretty dire place from the get-go, which makes us care less about what is made of them. Still, actress Camila Vaccarini shows believable desperation, facing family members who’ve turned into zombies and, well, a demon.

All things considered, The Funeral Home is not a great film, but I’m surely curious to see Ojeda develop his vision as a director in his upcoming projects. The potential is surely there.

The Funeral Home was released online on 2nd February 2021.