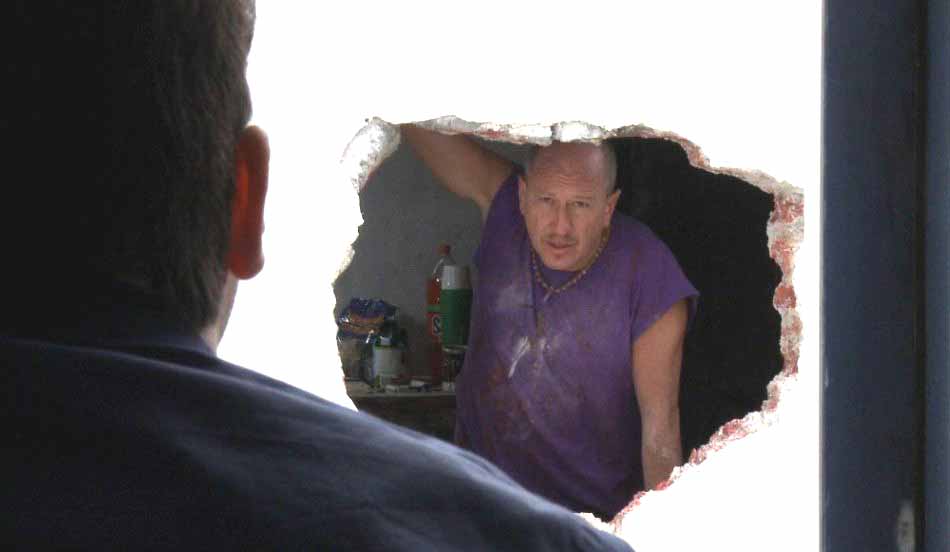 The Man Next Door

Leonardo (Rafael Spregelburd) is a successful interior designer whose obsession for architecture threatens to ruin his perfectly refined existence when his neighbour, Víctor (Daniel Aráoz), decides to knock himself a new window in a wall overlooking Leonardo’s modernist mansion.

The house itself, Casa Curutchet, plays an important part in The Man Next Door (El Hombre De Al Lado), being the only house that the celebrated architect, Le Corbusier, ever built in the Americas. Leonardo uses this excuse to justify the outrage he feels at his aesthetic sensibilities being offended by Victor’s impromptu decision to bash a hole in his kitchen wall to simply “catch a few rays”.

Leonardo complains profusely, not only on the grounds that it is probably illegal, but also because he claims that it will erode some of his family’s privacy. Víctor is always endeavouring to be the reasonable man, even if he is a little overbearing and occasionally happy to give this middle class poser a bit of teasing. He has an answer for each of Leonardo’s objections and simply wants to gain access to some of the sunlight which the white, open-plan house of the future so abundantly basks in.

It is ironic that Leonardo claims to be anxious about privacy when the house is an entirely impersonal affair; it’s all open space, plain white walls, glass and minimalism. This pragmatic coldness is reflected in his lacking relationship with his young teenage daughter who won’t even speak to him and his major claim to fame being a swivelly ergonomic armchair which the other characters point out is quite cool, but pointlessly expensive.

His neighbourhood nemesis, on the other hand, is from a lower class both economically and in terms of taste. He is most proud of his customised van which sports dark 70s decor, a minibar and a mirror ball, not to mention a flask hooked up to the car battery to ensure that a scalding hot cup of mate is always available. Víctor’s penchant for eccentric personal tweaks are contrasted with Leonardo’s steadfast compliance with rigorous academic form, all according to his idol’s famously blinkered assurance that: “a house is a machine for living in”. When a security advisor visits the house, Leonardo vetoes the idea of bars on the windows and only half jokingly says that before installing a panic button, that he must consult Le Corbusier about where to put it.

There are many genuinely funny comic interactions between the two rivals, especially where Víctor’s friendly but intimidating aura reduces the normally confident Leonardo to a more passive and helpless role in the conversation, but the film really stand out by showing in great and painful detail that, despite all of his outward refinements, Leonardo is just not a very nice person.

He totally buys all the trappings of the decadent bourgeois lifestyle and, although trying to act all matey with Víctor, is happy to slag him off to his friends as a ‘troglodyte’, only to then bad mouth his own friends in turn for their personal tastes when the dinner party is over. Because Leonardo is very much the archetypal snob, it is entertaining to watch the directors (Mariano Cohn and Gastón Duprat) detail just how hollow and unsatisfying his life really is.

This film could have been a macho testosterone battle between two pitched interlocutors but it is actually about much more than that, seamlessly dealing with class, taste and human decency to comic and tragic effect. And it even goes some way to debunking the myth that people who are constantly surrounded by wealth and beautiful things automatically become good people: despite all of his apparent vulgarity and tackiness, Víctor, the neighbour from middle class hell, actually has a lot more going for him.

The Man Next Door is being shown at the Ritzy Brixton, London, on the 20th April at 9.15pm as part of the 2nd Argentine Film Festival of London.