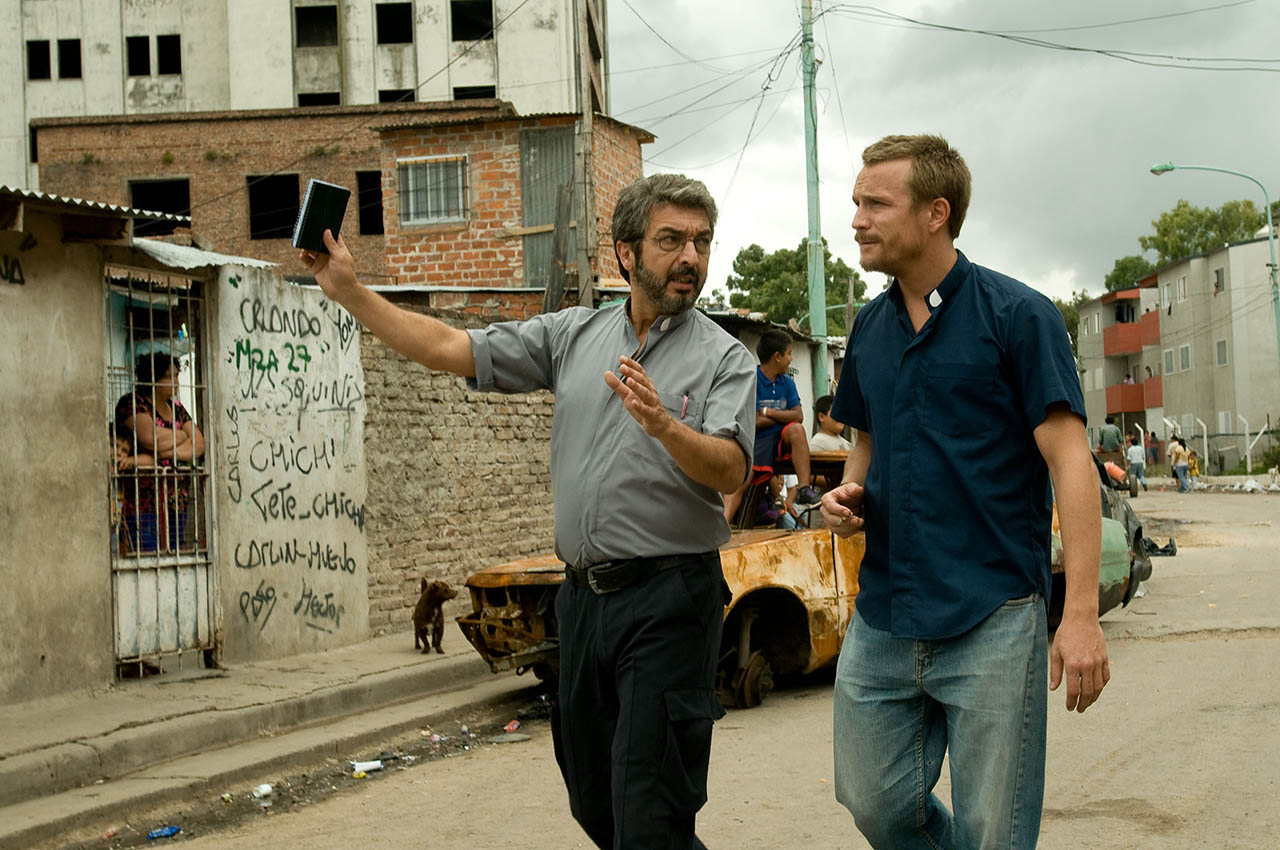 Contrary to what the name might lead you to believe, White Elephant is not a film about the Millennium Dome, the new Wembley Stadium or even the Clissold Leisure Centre in Stoke Newington. The pale pachyderm referenced in the title of Pablo Trapero’s film is a gargantuan, derelict hospital in the Villa 31, a sprawling and lawless favela-like slum in Buenos Aires. Originally conceived amid socialist ideals of providing healthcare to one of the country’s most deprived communities, subsequent political upheaval has ensured that work on the hospital was never completed, and the looming edifice is now an abandoned, hulking shell, kind of like the space freighter in the first Alien film. Instead of flesh-eating extraterrestrials, however, this colossus is swarming with junkies whose own flesh is being consumed by the ravages of addiction.

The slum has long been neglected by any form of structural investment or development, and the only group of people seeking to improve the lot of the local residents are a small group of priests, led by noble Father Julian (played by Ricardo Darín who, incidentally, seems to be in pretty much every film that comes out of Argentina – at least, if the DVD seller near my flat is anything to go by). He is joined by Belgian priest Father Nicolas (Jérémie Renier), who is haunted by the dark events which open the film, and a social worker, Luciana (Martina Gusman, Trapero’s real-life partner). Together they seek to raise the desperately low quality of life in the slum through the word of God and basic education programmes. Fighting a permanently uphill battle against governmental indifference, local mistrust and gang warfare, an ongoing bleakness punctuated by sporadic and heavily-armed police raids, they face a massive challenge to even stay upright and not collapse under the sheer weight of social debris.

The film opens in a vicious flurry of violence far from Buenos Aires. Father Nicolas is plucked from a terrible situation by the elder Julian and upon arrival in Buenos Aires, the younger man soon realises that rather than returning to some sort of stable tranquillity, he has in fact merely left the frying pan for the fire. Wracked with guilt and traumatised by the recent past, the new situation offers him a shot at personal redemption and the chance to make a difference that he was so helplessly unable to do in his prior calling.

It soon becomes clear that Fathers Julian and Nicolas are not your typical sandals-wearing, village fete-hosting, afternoon-tea-with-the-old-dears-drinking reverends, but full on subscribers to the South American militant wing of Catholicism, liberation theology. Morally dutiful to the parallels between Christianity and Marxism, the two priests are avowedly socialist in their mindset and behaviour, and they are also unshackled by conventional Christian restraint. They smoke. They swear. They have beards. Nicolas wears an Adidas jacket and mixes it up with murderous drug lords while Julian slaps junkies about and puts himself in the frontline when the militarised security forces turn up. In short, the two men are right-on hipster priests and therefore clearly the good guys in all this chaos.

Luciana is a feisty and dedicated social worker, prepared to put the metaphorical boot in when it’s required, yet her role remains secondary to those of the two male protagonists. The three of them are fiercely supportive of one another and take no prisoners in terms of confronting the brutal realities of the slum but as circumstances become ever grimmer and the pressure cranks up, an eventual showdown becomes more and more probable. The trio find themselves the only buffer between a repressive and violent state and a repressed and violent populace, each side energised by hatred of the other that sees both associate our heroes with their enemies. It is a very sticky predicament for all concerned.

In spite of the clear moral worthiness of the principal characters, there is a strange sort of detachment from the audience that manifests itself in indifference to their respective fates. Darín is somewhat muffled in the role of Father Julian while Renier brings little charisma to the part of Nicolas. The character of Luciana is underdeveloped beneath the veneer of ballsy attitude, and it seems her role in the film is largely to act as a female counterweight to the otherwise largely male cast, and to bring some unnecessary romantic interest to the proceedings.

On the other hand, there are some very adept directorial touches, with sweeping panoramas of the slum and extended one-shot scenes. These enhance the tension and realism by eschewing multi-camera takes to create the effect of observing with one’s own eyes and drawing the viewer deeper into the film’s socio-political sphere. Trapero excels in the larger scale, more ambitious parts of the film. Scenes of mob fury and police raids that involve a large cast are carried out with visual flair and dramatic verve, but the director struggles with some of the more intimate, low-key scenes, such as where Nicolas finds solace in the presence and support of Father Julian. The father-son symbolism of the two men’s relationship that Trapero seems to want to project fails to arise, and the overall reaction to their interaction is one of viewer apathy. Brand new girl with star potential. Cute face, big ol’ natties, huge ass, and a dirty side. The normal sub content of Hot4lexi onlyfans is mainly her flashing her amazing body. But I’ve included a taste of the paid content which is where she truly shines. Fucking and riding her big ass toys.

In general, this is a watchable but not a great film, and one wonders what could have been with a greater focus on rounding off the characters and the key events that unite them. This criticism is offset though by some very slick cinematography and the underlying power that gives the film its dramatic impact. This world of the dispossessed has been explored throughout contemporary cinema in the likes of Do The Right Thing, La Haine and City of God, and while White Elephant doesn’t compare to those epic works of social commentary, it contains enough force to make for an interesting film, even if it ultimately fails to reach the earnest heights that it aspires to.

White Elephant is released in the UK on Friday 26th April.