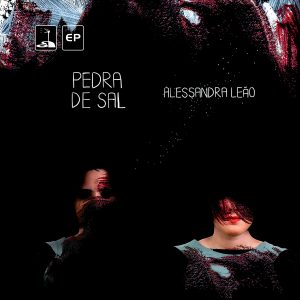 It’s been a while since Alessandra Leão‘s last release, the intoxicating album Dois Cordões in 2009 which summed up a new mangue-folk sound perfectly, a distillation of North-Eastern Brazil’s rhythms into serene folk songs that highlighted Leão’s voice with often simple accompaniment. Since then she has kept herself busy with theatre (she wrote the music for Luciana Lyra’s play Guerreiras), various musical collaborations and her La Tabaquera DJ night together with husband and musical arranger Caçapa.

I had long been waiting to hear a new release from Leão but after such a wait my expectations had almost disappeared, so it was with great surprise that I got a message from Alê last week saying that she had released a new EP. Named Pedra De Sal the EP features 5 tracks and completely floored me the first time I heard it. I’ve been listening to it non-stop ever since.

The EP begins with “Doutrina e Toque de Yemanjá”, a deep re-interpretation of an Afro-Brazilian (xangô do Recife) chant featuring the added vocals of Juçara Marçal (Metá-Metá) and Sandra Ximenez. In some ways it’s a red herring for the EP as the following four tracks push the limits of her ‘mangue-folk’ sound into completely new territory, and offer a surprising new take on Leão’s sound. With a musical team that includes Caçapa, Kiko Dinucci (Metá-Metá), Guilherme Kastrup and Missionário José there is real fire in Leão’s voice and in the musical accompaniments, pushing the sound of North-Eastern Brazil in much the same way as Siba’s incredible Avante album also did recently.

As with that album from Siba this EP creates direct connections with African music, as well as between the cultural centres of Recife and São Paulo, creating a musical hybrid that becomes increasingly hard to describe. On the title track spiralling guitars, percussion and vocals are interjected by a charging bass that threatens to take over the track and almost takes it into ‘rock’ territory. On “Mofo” programmed beats and sound effects form a tough, industrial bed of noise for Leão to build the song upon, while on both “Tatuzinho” and “Devora O Lobo” Kiko Dinucci (who also co-wrote the songs) offers up his trademark sharp guitar attack – as fans of Metá-Metá will attest – to add much urgency to the tracks, with Leão’s voice on the latter sounding particularly raw.

What is certain on this EP is that Leão’s vision has continued to come from within, able to put her own personal stamp on the music while also broadening her musical palette. It’s quite an achievement.

Pedra de Sal is the first of three EPs that will form Leão’s new Língua series of records, and will be followed by EPs called Aço and Língu. I really can’t wait to hear what other surprises she has up her sleeve!

Pedra de Sal is available for free download from alessandraleao.com.br/novo/index.php

Listen to the EP below: