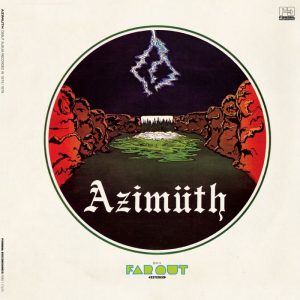 Azymuth’s music has been part of my life for many years, but until recently I had been unforgivably unaware of it. My first experience of this incredible Brazilian jazz-funk trio was a remix of “Morning” by Stones Throw label head Peanut Butter Wolf. Not only has a hip hop label out of Los Angeles remixed their work, but infamous house specialist Theo Parrish’s reworking of “Avenida Das Mangueiras” has been a stalwart choice for many a DJ wanting to ignite the dance floor. It was only when Floating Points played them on his NTS residency that I made the connection. And with a veteran such as DJ Gilles Peterson also flying the flag for the group, it only seems fitting that their eponymous debut has been given the reissue treatment, forty years after its initial release.

Opening with the serene “Linda Do Horizonte”, the album picks up pace with the quite brilliant “Melô Dos Dois Bicudos”. A hook to die for, a cuica solo, a raging synth line; this piece has everything. Their ability to move through styles, whilst still retaining their essence, is a trademark of their entire catalogue. Album closer “Periscópio” is an eight-minute epic, as funky as you like, with Alex Malheiros’ basslines giving Bootsy Collins a run for his money. It bows out with a ferocious break beat, pre-empting drum and bass by nearly a decade and a half. For a debut album, it’s a remarkably accomplished work, and can stand strong alongside any of their later work, including their 1979 release Light as a Feather, that featured the breakthrough hit “Jazz Carnival”.

Often re-issues can seem like a forced, and rather arbitrary affair, to give a new injection of sales into an artist whose relevance petered out when punk hit the ground running. But this isn’t an appeal to an ethereal musical Albion. Azymuth’s importance is as pronounced as ever in 2015. Two years ago they featured on today’s most influential online music platform, Boiler Room, and received 50,000 YouTube hits on their videos. Only last week I heard “Morning” on NTS. It would be truly criminal not to acknowledge Azymuth’s magnificent oeuvre, and thankfully Far Out Recordings are now giving them the recognition they so truly deserve.

Azimuth is available from Amazon UK

, Amazon US and iTunes