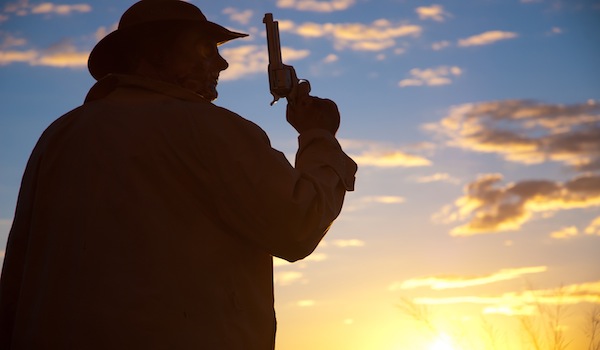 Porto dos Mortos (Beyond the Grave) is a zombie film, written, produced and directed by Brazilian Davi de Oliveira Pinheiro. There’s no doubt right now is a good moment for the zombie genre with their popularity at an all-time high. Unfortunately, this one is unlikely to add much to the genre. Rafael Tombini (Officer) stars with Álvaro Rosa Costa (Franco), Ricardo Seffner (Shooter), Amanda Lerias (Nina), Luciana Verch (Adriene) and Leandro Lefa (Ashley)

The scene is set in a post-apocalypse Brazil. The world is populated by zombies, assorted survivors, enchanted murderers, a serial killer, an obsessive detective and a black Chevvy Camaro V8, which at a conservative estimate would do 20mpg in a landscape which offers no visible means of support. Still, artistic is out on licence with this one. Despite some very promising ingredients – not least of which are the fabulously spooky locations, a disused industrial plant, an abandoned school and the disquieting vastness of the landscape – the film fails to measure up. It gets worse, too. Even the Dark Rider, the post-apocalypse nemesis – clad in a cowboy hat, trench coat, gas mask, and sporting a strange gun with a stock like a dead monkey’s paw – is more petulant than menacing.

Officer, the hero, journeys through this landscape like an estate agent visiting properties, sometimes with clients and sometimes without. His pursuit of the serial killer is the pivot around which the action turns. However the plot needs more than that to impart depth, characterisation and context. Where are they? Missing in action. The zombies – but for the odd exception – seem even shorter of get-up-and-go than is normal even for them. Don’t they know it is all-you-can-eat?

In most post-apocalypse scenarios, it’s easy to imagine why the apocalypse occurred. There is some lead in, some hints and often some evidence. Here we’ve got just a sporadic recording played on the Chevvy’s cassette player. You’d have thought that the survivors might have learned a trick or two about humanity, if not zombies. Instead, the hero is a sort of lone ranger in all this – a self-obsessed figure too preoccupied with his own plan for vengeance to consider anything else. A script doesn’t need to clarify everything but it does need to clarify something.

All dressed up with nothing to do

Even Bob Hope in the comic-horror, The Ghost Breakers (1940), managed more spooky, suspenseful and surprising zombies – and he did it for laughs. You could blame the make-up artist but that would be cheap. Zombie movies need unpleasant surprises, twists and turns, they can’t survive a largely uninterrupted linear narrative peopled by underdeveloped characters and a sort of Knight Rider-cum-High Plains Drifter cross.