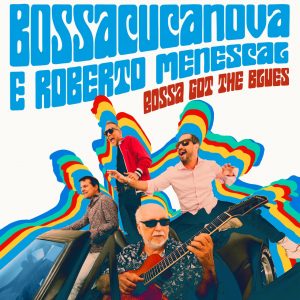 At the end of last year Carioca group Bossacucanova, composed of Marcio Menescal, DJ Marcelinho da Lua and Alex Moreira, released their latest album Bossa Got The Blues in collaboration with bossa legend Roberto Menescal, and the result is a beautiful fusion of acid jazz, torpedoed with a plethora of bossa nova beats, guitar riffs and uptempo electronica.

Known for the role they’ve played in a new generation of MPB artists that are “revisiting and developing a new language of contemporary bossa nova”, they’ve worked with an impressive entourage of Brazilian musical gurus, while offering their unique, experimental accent for a contemporary twist to the traditional sound of samba and bossa nova.

They first caught the spotlight back at the end of the 90s and early 00s, with their stand-out marriage of bossa nova and electronic music on early albums Revisited Classics and Brasilidade, and they have continued to explode onto the international scene ever since. After touring across Japan and Europe, they then added a Latin Grammy nomination for Best Brazilian Contemporary Pop Album for Brasilidade, with the likes of Roberto Menescal, Marcio’s father, playing a big part on that album.

In a stellar album that is 10 tracks deep, the Brazilian trio have once again called on the bossa magic of Roberto Menescal for a novel take on American blues, merging elements of authentic Brazilian bossa nova for a soothing sound that is unlike any of their previous material. Think (deep breath) an embryo of mega-instrumental melodies with bossa nova gradually getting heavier with elements of dub and modern tones thrown in to produce a dance spectacle that together combine to create a brand new global soundscape.

Although global in its harmony, the album is very much Carioca at its core. Bossa Got the Blues was recorded throughout 2018 at various different studios across Rio de Janeiro. Living up to their status, the album is brimming with special guests from the bossa scene including the legendary producer Moogie Canazio, who mixed the lead song on the album, “1937”, as well as the late Paulinho Trompete who died after working on the aforementioned single. “1937” is spicy, jazzy and makes you feel like you’re dancing in the sunshine. The upbeat Latino tempo breaks the ice at the outset and it sizzles with Roberto Menescal’s deliciously textured guitar infusions. The first single was named after the year Roberto was born.

“Train to Ipanema” starts off with oozing sirens before breaking into a groovy syncopated beat with Menescal’s gorgeous guitar riffs shining through and light, sparkling bossa beats soothing the melody. One can only imagine the feeling of being sprawled on the metro come carnival time en-route to one of Rio’s most beautiful beaches. “Bossa Got the Blues”, the title track, is one of the finest on the album. Its delicate cashmere guitar riffs drip over sumptuous sirens with blues beats shaking up the harmony.

The final track “Galeria Menescal”, begins with a twinkling melody before gradually soothing into soft, serene vocals, riding a measured wave of harmonies with slow-strung injections of guitar making an appearance half way through. The result is this dreamy sensation of making you feel like you’re floating on air.

Amongst the group’s entourage of legendary guest appearances on the album is Carlos Malta (piccolo, fife and C-bass flute), Sidinho and Ian Morreira (percussion), Flavio Guimarares (harmonica), Jota Moraes (vibraphone), Leo Gandelman (brass, baritone and tenor) and the Rio Maracatu bloco de carnaval, who bring the sounds of the Brazilian north-eastern coast to the album.

Bossa Got The Blues in its entirety is a beautifully composed album that takes listeners on a journey through different musical horizons across Brazil to the States and back again. It’s one of those albums that has a recognisable sound, yet is simultaneously like a breath of fresh air swept in off the coast.

Listen to the full album below and follow the band on Facebook and via their website for a glimpse into what they have been up to over the past two decades.