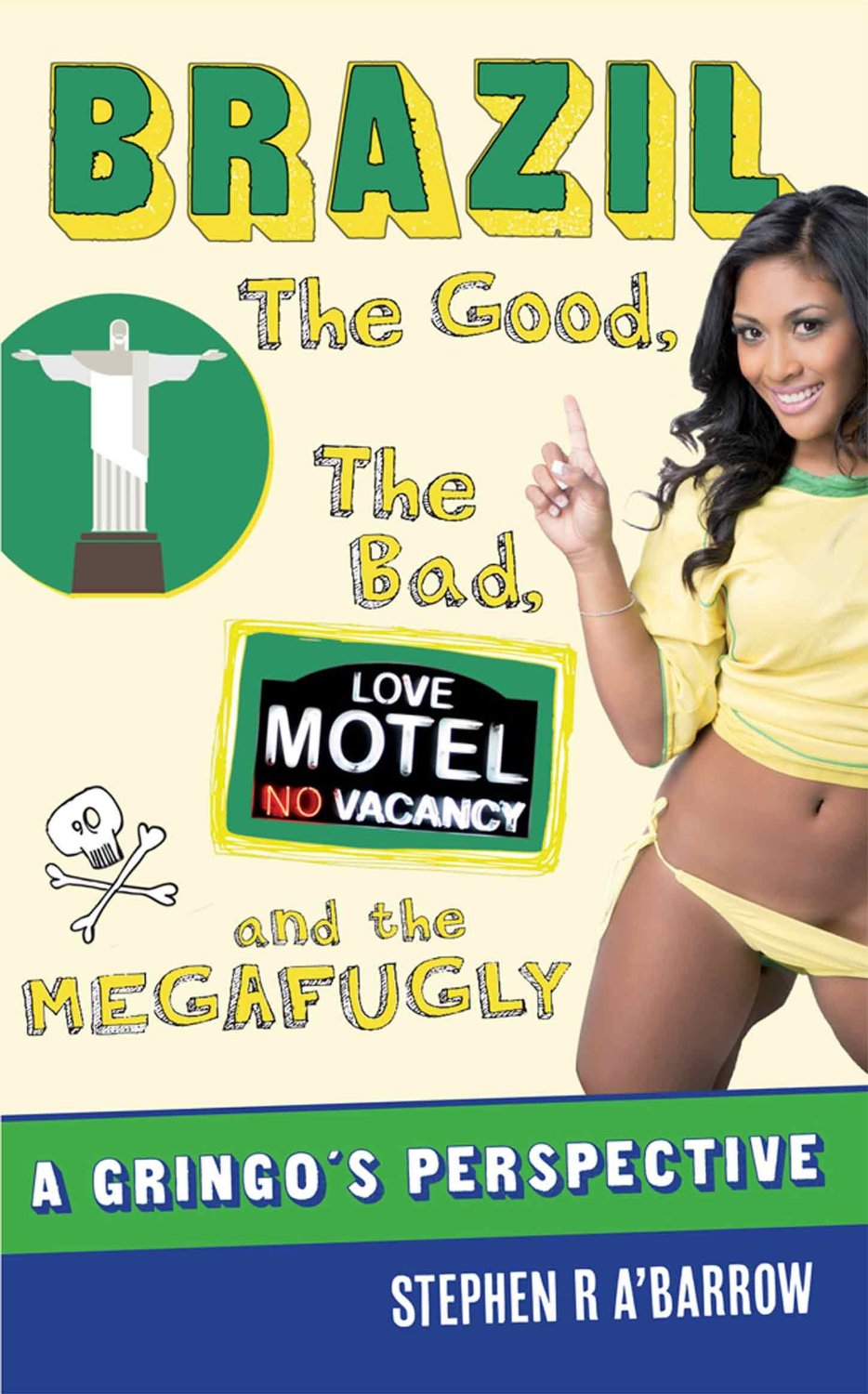 Brazil: The Good, The Bad and the Megafugly by Stephen R A’Barrow

Brazil: The Good, The Bad and the Megafugly by Stephen R A’Barrow, subtitled A Gringo’s Perspective From South of the Border, is a no-holds barred view from an author who is married to a Brasileira and lives and has travelled widely throughout the country for over six years.

At first sight you think, wait a minute this is supposed to be about Brazil, isn’t it? Family holidays in that corner of a foreign field (Spain) that is forever England? An ex-squeeze (Siciliana) embraced against a night sky with Mt. Etna packing magma 40 miles in the distance? More exes? The niceties of Legovian diplomacy in Havana? Speed dating in Miami? What’s going on?

However, this is just the descriptive preamble which introduces the reader to the origins of the author’s love of the Latin. Yes, women – but more. Have I mentioned women? Yes? Well, there’s more women, food and booze, which, let’s face it, is a dead cert for most men. To put it bluntly, in a Brazilian context, neither Portnoy nor the author could have any complaint.

The tone is unapologetically laddish. No skirt is left unturned, no teta unobserved, no bunda baulked. It then moves on to football, pauses at women and booze, stops at Carnaval and stag and hen nights before moving off to the heights of plastic surgery, where Brazil’s medical profession racks up some impressive statistics.

Thence, we’re off at a good pace to those areas of life south of the equator which drive Northern Europeans and Americans bananas if not nuts. There is mindless bureaucracy, pathetic ineptitude, invincible ignorance, learned helplessness, all the elements you find in places where the lore of the land is systemic corruption. Pour me a Pirassununga 51, or ten.

Everywhere has its idiosyncrasies but Brazil – at official levels, which A’Barrow despairs of – would try the imagination of a surrealist. There is idiotic red tape on everything from driving licences to car hire and business start-ups; a Supreme Court which is in danger of not being supreme; regulations on planning and building that are rudimentary; crazy import restrictions (130% tariffs) which protect the good, the bad, the outdated and the locally unavailable; punitive rates of income tax which mean that people have to work five months before they earn anything (Folha do São Paulo); base rates which start at between 11-15%; an almost blanket absence of insurance and assurance (once again unavailable even on economically vital agro-industrial crops like soya, coffee, livestock…) and so on. R&D investment is low level and productivity between 1993-2005 was just 0.3% compared with 2.8% for the US and 8.5% for China.

None of it makes any sense until you’re reminded that what greases the wheels is not some notional idea of efficiency and order but the need to accommodate graft (of the percentage variety). It’s take it or leave it. They [the politicians] take it, of course, which means that according to FIESP (Federação das Indústrias do Estado de São Paulo) 2.3% of the country’s GDP gets spirited away for political lubrication.

As A’Barrow explains, it’s been like that since the Portuguese Crown took 20% of everything and the military imposed rigorous “discipline”. Being expected to stump up US$200 for Haribo Gummi Bears to get them released from customs is a case in point. The wantonness and waste are exasperating. The vast pyramidal structure of the Brazilian society supports a small capstone elite on an army of maids, nannies, waiters, drivers, factotums and government staff in triplicate. Some 25% of the country’s education budget goes on 2% of the population and most Brazilians can expect just seven years of full-time education. Meanwhile, just one Brazilian university – Universidade de São Paulo (USP) – is in the world’s top 150 (at 150).

Where’s the money going? It isn’t infrastructure. The Brazilian Institute of Geography and Statistics (IBGE) estimates that 50% of homes don’t have a sewage connection; 22% don’t have access to running water and 43% were recently condemned as “not fit for human habitation”.

Having described the Brazilian sense of humour in just two pages as being of the slapstick, Benny Hill and Mr Bean variety, i.e. short on sophistication, A’Barrow later remarks that the Brazilians themselves have coined the term “the land of unlimited impossibilities” and mentions that they believe Christ the Redeemer has his arms outstretched in readiness to applaud any carioca (citizen of Rio) who does any work. That level of self-deprecation points to “hidden” talents.

The finer points of Brazil’s sexual mores, maternity wards, medicine, time-keeping, telephonic jibber-jabber, the weather, mind-blowing officialdom, transport chaos, social stratification and urban blight are all dealt with unsparingly. Which is a pity, because what could sometimes have been spared, isn’t.

When Fishes Flew and Forests Walked…

When it comes to legs, A’Barrow is no lover of anything on more than two; definitely no hairs and preferably shapely. The chapter on “Mozzies, Creepy Crawlies, and Things that Keep you Awake at Night” is very funny and a dramatic illustration of what happens when you leave a country where the fox is the biggest predator and end up somewhere literally crawling with bio-diversified malice. No pissing around here, just like the conquistadors you go for Year Zero and swat the fuck out of everything. Oh, and don’t mention the Amazon, just the thought of it makes A’Barrow nervous.

Meanwhile back in Belo Horizonte (Minas Gerais), Goiânia (Goiás), Uberlândia (Minas Gerais), it’s bring on the cows or “mumus”, the colossally expensive bloodstock which struts around a bash which owes more to a cross-breed of Crufts with the Oil Barons’ Ball in Dallas than a mud and manure-strewn ATCOST barn in Hereford. A’Barrow, who is from farming stock himself notes, the farmers – actually multimillionaire latifundistas – are dressed in DJs like bankers and come with gorgeous consorts. Not a pair of wellies in sight.

In passing A’Barrow introduces some of Brazil’s leading attractions. The old colonial-era port of Paraty, which dates from 1500, and the old towns of the Estrada Real/Royal Road (Tiradentes, São João del Rei, Ouro Preto, Mariana and Diamantina, all in Minas Gerais state) which still retain much of their culture, charm and Portuguese colonial and church architecture because their economic star waned with the emergence of Rio, São Paulo and the slave ports of the North East, notably Recife, Salvador and Natal. The stretch of coastline from Rio down to Paraty is particularly notable because it has as a backdrop part of the original Mata Atlantica rainforest. This once ranged over more than 2000 miles along the Brazilian coast and inland through present-day Missiones (Argentina) and into Paraguay but is now clipped back to just 11% of its original extent.

There are also references to the islands of Fernando do Noronha off Natal, Ilha Grande off the state of Rio and Morro de São Paulo off Bahia, plus the dubious attractions of the holiday complexes of Costa do Sauipe (Bahia), where staff enthusiasm overflows into duress. In contrast, he recommends Porto Seguro, Arrial d’Ajuda and Trancoso in Bahia and Porto de Galinhas, Itamarca and Pipa in Natal, where Brazil conforms to its undeniable qualities rather than an imported notion of what constitutes a good time.

At the end A’Barrow has a brief ready reckoner on where to go, what to see, where to eat and stay, etc., not just for parts of Brazil but slightly incongruously for selected spots in Argentina, Ecuador and Peru. His suggestion that visitors to Buenos Aires should visit D&G, Armani, Dior and Ralph Lauren… begs the question. If experience is a wonderful thing, isn’t it more so if you don’t know what’s coming? Surely, somewhere is always better than everywhere?

The title of the book is apt. It accurately describes the contents and the author’s handling of them. The “Good” isn’t so good, the “Bad” is better and the best lies in the “Megafugly” and the first chapter of the “Epilogue” where A’Barrow gets into his stride.

Brazil: The Good, The Bad and the Megafugly is available from Amazon (UK) and Amazon (USA)