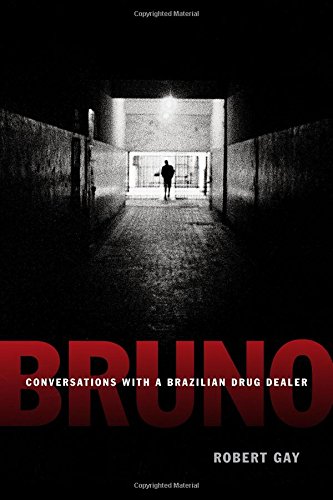 Bruno: Conversations with a Brazilian Drug Dealer by Robert Gay

At first sight “Bruno” seems an unlikely recruit for the world of organised crime. He’s not from a favela, he is poor, but not desperately so, he’s educated to a certain level but yet like a lot of Brazilians he’s part of the great ignored.

The testimony starts in the early 1980s. Bruno is a young naval corporal from Recife who has chosen to be posted to Corumbá, Mato Grosso do Sul in the wilderness of Brazil’s Pantanal. This sparsely populated riparian frontier with Bolivia was a place where not much happened. Then he notices that whilst he’s on a $293 a month, living in general quarters and cannot even afford to go to a nightclub, there are people who seem a lot more comfortable.

Corumbá may have looked like a dozy backwater but 80% of its income came from smuggling cocaine at $1000-2000 a kilo to Rio, where it would sell for more than double. It’s a familiar scene to anyone who has seen the rise and fall of Henry Hill in Goodfellas, Scarface or read Mr Nice; excitement, respect, riches and power have their own momentum. Bruno, at 21, is naïve, ambitious and attracted by the faux glamour of a world in which everything is for sale and everything has a price, including respect. This is a lesson that will accompany him throughout his time in Brazil’s penal system and will ultimately help ensure his survival.

In the mid-1980s, the Andean-Brazil drugs trade, whilst little more than a trickle, was beginning to take off. The frontier, as Gay notes, is vast (16,885km) most of it jungle and wetlands. Bruno thinks what better way to earn a few thousand bucks than to use the largesse of the Brazil’s military network as a conduit for supplying Rio by way of the air base at Campo Grande. It also helped that impoverished navy personnel, Bruno among them, regularly intercepted cocaine smugglers and confiscated their cargoes.

Once in the loop, with bought or confiscated stock, the appeal of easy money proved irresistible. What’s more with the cocaine producers’ handsome credit terms you didn’t always have to pay all or part upfront, particularly if you had already proved trustworthy. There were drawbacks, of course, if you didn’t pay, diddled them out of part of the proceeds or ‘lost’ the consignment, the degree of liability was invariably fatal (as befell Bruno’s former accomplice, Valdoberto).

Sometimes, such as when a consignment was intercepted by the police, smugglers had some explaining to do. It wasn’t unusual for the police to skim off some of the stock before declaring to the press that the seizure was smaller than it actually was. Whether this was true or whether the smugglers or the police had pulled a fast one, was immaterial, any loss still had to be covered.

Smugglers, Bruno included, purchased jewellery, cars, houses, hotels and other assets not just as a way of laundering the proceeds, but because they would act as source of liquidity and a hedge should something go wrong.

Addiction Incorporated and Murder in Practice

Bruno’s testimony, plus the excellent background Gay provides, sets out not only how the trade is run and how the various gangs came into existence, but the woeful record of Brazil’s judicial and penal systems. It also cites some of the dramatic events between the various factions including the massacre of Orlando da Conceição (aka Orlando Jogador) and 11 associates in 1994 by Ernaldo Pinto de Medeiros (known as Uê) in the favela of Grota, Complexo do Alemão, which triggered a split in Comando Vermelho (CV) and led to the foundation of Amigos de Amigos (ADA).

Uê would go the same way in 2002. Fernandinho Beira-Mar, CV’s main cocaine supplier through his multiple arms-for-cocaine deals with FARC (Fuerzas Armadas Revolucionarias de Colombia), led four men armed with pistols and a shotgun, overcame two guards and six steel doors between Cell Block A and Cell Block D in Bangu “maximum security” prison, before smashing in Uê’s jaw and skull and setting him alight in a pyre of mattresses. Beira-Mar was the linchpin in a trade which generated millions of dollars and put him on the US DEA’s (Drug Enforcement Administration) most-wanted list.

As Gay explains, all the 40-year-old war on drugs (including Plan Colombia) has achieved, despite costing the US taxpayers $1trillion, is to fill Brazil’s prisons with mostly low-level, mainly non-violent offenders, shifted production from Colombia to Bolivia and Peru, and rerouted supply away from the Caribbean to Central America and Mexico. In 1990, half the cocaine came through Mexico, but by 2007 it was 90%.

Bruno, like many others, wanted to cut out the middlemen and deal directly with the producers. But without the necessary network, he quickly became unstuck. Not only did he not have the expertise or networks in place, his attempt to set up a laboratory for processing base was busted on the day it was due to get off the ground. His desire to make more profit and thoughts of developing contacts overseas came to nought and led to his downfall.

The structure of the trade both inside and outside prison is remarkably similar to the US examples of organised crime from the 1930s through to the 1980s. Crime gangs get to run a particular turf (favela), prisons are often demarcated according to gang allegiances (CV, ADA, TC) and operate as offices, the same honour code exists and godfathers, consigliere, capos (made men/leaders) and soldiers abound.

Bruno’s story reveals the Brazilian prison system to be, from his first incarceration in Vila de Dois Rios, Ilha Grande, to serving out his sentence at Lemos da Silva, a world of bewildering levels of corruption, graft and brutality. At times the prison governors, guards, police, gangs, lawyers, suppliers and even the visitors are all on the take or make. Everything has a price.

It is to Bruno’s credit that when he became a member of the CV in Ilha Grande, and later leader of the CV in Carvalho Troiano prison, he proved to be a very skilled negotiator/diplomat and mitigated the excesses of inter-gang conflict whilst at the same time improving and playing the system for both personal and general gain. He also had the added cachet of having escaped, albeit short-lived, from the notorious Ilha Grande, which made him part of the criminal illuminati.

The abiding impression of this account both on a personal and societal level, is that Brazil is the agent of its own misfortune and the poor, in particular, are carrying the can. If Bruno could come out of this as a reformed character, why couldn’t anyone else given the same level of support? Instead, it continues to assault poverty at the end of a barrel and uses incarceration as the preferred method of addressing issues such as illiteracy, petty criminality and unemployment. For example, the government will spend billions of reais on security and new prisons, but does little or nothing to break the loop (poverty, crime, prison, poverty, crime, prison… or premature violent death). It is a horrendous waste, profoundly unjust, counterproductive, unimaginative and financially profligate. However, the “lock ’em up and throw away the key” school, despite its abject failure, resonates with a purblind electorate.

From Mowing to Watching the Grass

Up until 2008, the standard military practice was to go into favelas like Jakiera and kill as many gang members as possible and withdraw. It was termed by the military and police as “mowing the grass”. When Unidades de Policia Pacificadora (UPP) were introduced in 2008, they replaced the combative role with permanent occupation. As of March 2014, there were 36 UPPs in Rio, notably those in close proximity to World Cup 2014 and Olympics 2016 venues.

In 2009, the Latin American Commission on Drugs and Democracy, comprising the former presidents of Mexico, Colombia and Brazil, concluded that drugs should be treated as a matter of public health and repression ought to focus on organised crime. Progress has been painfully slow.

This particular account is interesting and engaging, yet ultimately depressing. Patrick Geddes, the Scottish sociologist and polymath, once remarked on the tendency for the polis to end in necropolis. Regrettably, in the Brazilian example, there seems little political will to ensure that it won’t.

Bruno: Conversations with a Brazilian Drug Dealer by Robert Gay is published by Duke University Press and available from Amazon UK and Amazon US