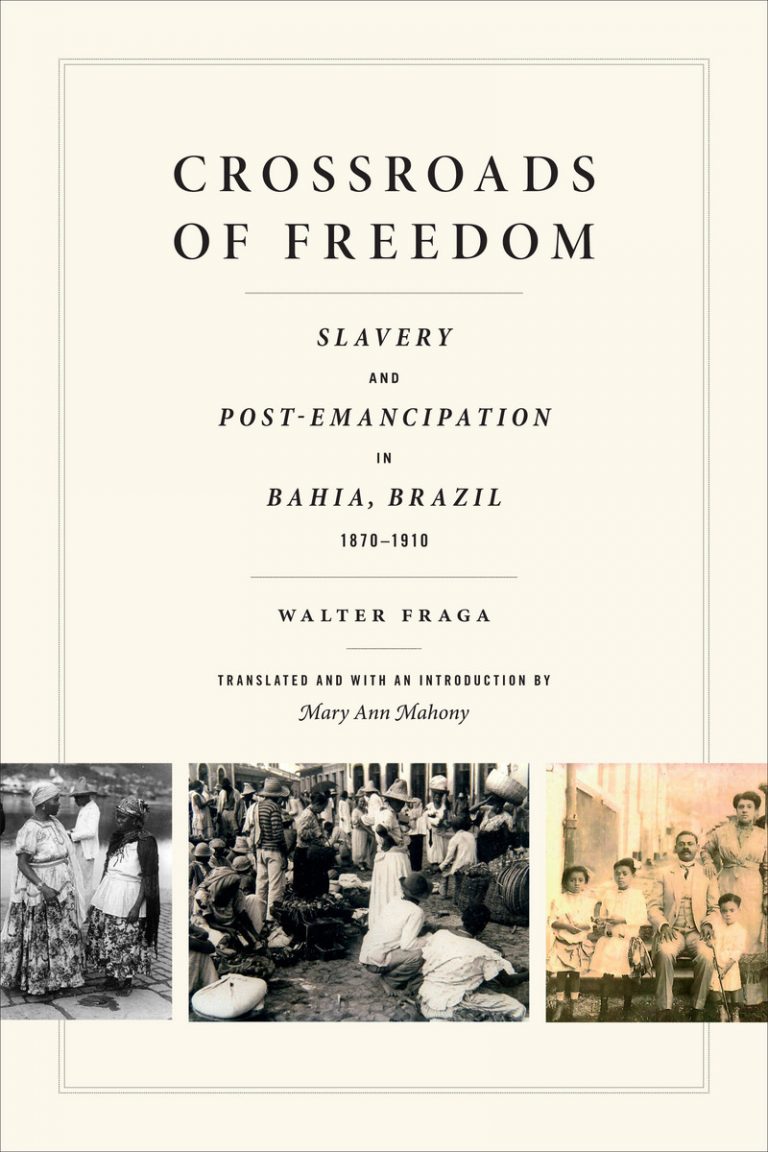 Crossroads of Freedom: Slaves and Freed People in Bahia, Brazil, 1870–1910

Walter Fraga’s Crossroads of Freedom: Slaves and Freed People in Bahia, Brazil, 1870–1910 is an impressively constructed study of the lives of Afro-Brazilians in the Recȏncavo region of Bahia (the Recȏncavo is the area surrounding the Bay of All Saints) in the years surrounding Brazil’s abolition of slavery on May 13, 1888. (Somewhat unusual among academic books, Crossroads of Freedom is an English translation of a work published by Editora da Unicamp in 2006, Encruzilhadas da Liberdade: História de Escravos e Libertos na Bahia.) Fraga employs plantation inventories, court cases, newspaper articles (often read “against the grain”) and many other documents to chart the trajectories of the lives of people on several Recȏncavo plantations both before and after abolition.

Crossroads of Freedom builds upon the extensive historiography of the Recȏncavo, the richest sugar-producing region of Brazil at the time of abolition, especially Bert Barickman’s A Bahian Counterpoint: Sugar, Tobacco, Cassava, and Slavery in the Recôncavo, 1780–1860 (Stanford University Press, 1998). Like Barickman, Fraga draws special attention to the spaces Bahian slaves negotiated with their owners beyond work in the cane fields, especially in the growing of subsistence plots known as roças. Fraga argues that these plots represented an important means of self-determination to Bahian slaves. Moreover, this hard-won liberty helped give them the courage to resist slavery in increasingly bold ways between the passage of the Law of the Free Womb of 1871 (which freed children born after the date it became effective) and full abolition, including appealing to legal authorities and abolitionists in Salvador to protect them from physical punishment, and for many, even flight. Even after abolition, roças remained important to freed people as means to a subsistence lifestyle beyond the demands of the sugar planters, who still schemed to control the lives of their former captives (an evocative word Fraga uses as a synonym for ‘slaves’ throughout the book) and hoped to keep their now fledgling plantations economically viable.

The book is subtly revisionist. Related to Fraga’s exploration of the ways slaves resisted their captivity in the 1870s and 1880s, he argues that abolition had broad popular support in Bahia, and he makes it a point to mention the work of homegrown Bahia abolitionists who came from working-class and even slave backgrounds. This is much different from the ‘traditional’ argument I encountered years ago: that abolition in Brazil was undertaken by elites who were ashamed of their country’s position as a slave-holding society in a world that largely condemned slavery by the second half of the nineteenth century – Brazil was the last nation in the Americas to abolish slavery. Although Fraga does not devote extended attention to music, several references to samba, one to pagode, and another to possible Candomblé ceremonial drumming make it clear that music was an important factor in defining community for Afro-Bahians. (And I hope I don’t show unforgivable ignorance in saying this, but I’ll admit I did not realise samba and pagode dated back so far.)

While Crossroads of Freedom provides a rich portrait of the Afro-Brazilians community of the Recȏncavo, like many other close-up local histories it suffers a bit in providing big-picture context, and it is notably thinner in content after about 1895 than in the years closer to 1888. This makes it little bit hard to say what the takeaway point may be, although its attention to the ‘agency’ of slaves and freed people may be enough. Fraga stresses that they were more successful in controlling their destinies within and after slavery than previous generations of historians were able to credit. The translation by historian Mary Ann Mahony, done with the assistance of Fraga, is generally quite good, although I’ll admit I was a bit annoyed by the many usages of the word ‘guy’ throughout the text, and not just in quotations. It seems far too much a slang word for an academic text; perhaps equivalent words like cara are acceptable in Brazilian academic texts, although I don’t recall ever encountering it. I do wonder if perhaps it’s supposed to be a translation of moço (young man), a word not quite as freighted with ‘slang’ associations. I hate to admit that I’d be hesitant to recommend Crossroads of Freedom to non-academic readers, but it is undeniably an important study, which points the way to a richer understanding of Brazilian slavery in the years around 1888.

Walter Fraga’s Crossroads of Freedom: Slaves and Freed People in Bahia, Brazil, 1870–1910 is published by Duke University Press and available from Amazon UK and Amazon US.