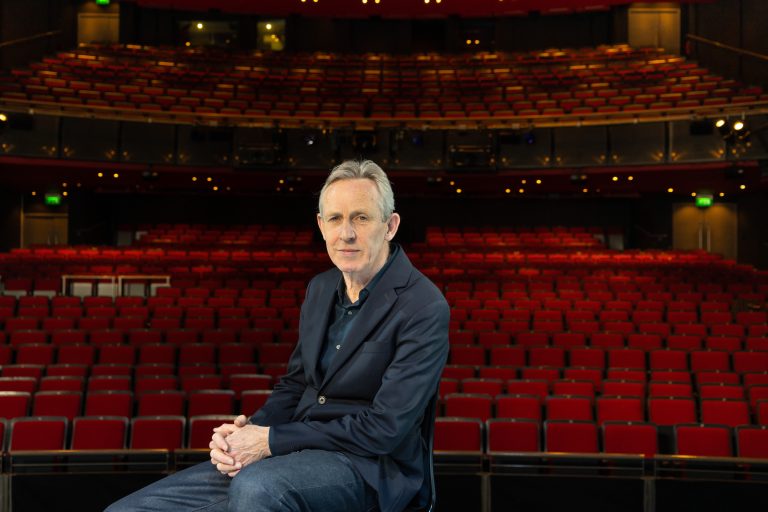 ‘Dance Exists Because It Moves, Literally, Around the World’ – An Interview with Sadler’s Wells About Their Latest Brazilian Show and the Future Of Dance

Sir Alistair Spalding, CBE, Artistic Director and Chief Executive of Sadler’s Wells, talks to Sounds and Colours about the latest show from Brazilian choreographer Bruno Beltrão and the future of dance.

Deborah Jowitt, the former Village Voice critic, wrote: “If art is valuable as a reflection – of a time, of a place, of a creation – then dance is just as important as literature or film, even though the audience for it is smaller.” New Creation, the latest work from Brazilian choreographer Bruno Beltrão is an exploration of what is happening on the street in Brazil right now. Beltrão, and his Grupo de Rua company, performed the show, to two sold-out shows at Sadler’s Wells last week.

The short but powerful piece takes place on a near-pitch black stage. Instead of music there are mainly shrill, jarring sounds. Within this stark landscape mood and movement are magnified. Bent shapes scuttle on tiptoes, frames fling forward in frustration, legs are pulled into the air like puppet strings and bodies are stretched to run backwards. Life has been turned on its head as the nine dancers explore how to keep moving and in which direction. The choreography is unsettling yet precise, filled with abrupt yet deceptively synchronised actions and feats of athleticism. At times it feels violent and angry, but also has moments of melancholy and longing. The piece, according to its description, “considers what happens when a political scene creates disharmony, polarises the people and limits freedom and equality.” While there is no obvious narrative to follow throughout its brief 60 minutes, the audience can’t help but surrender to the intensity of the emotions it produces.

This is the third show Beltrão – originally a hip hop dancer who set up the company when he was 16 years old – has brought to the UK. We spoke to Sir Alistair Spalding, CBE, Artistic Director and Chief Executive of Sadler’s Wells about the show, programming at the London venue and the theatre’s future.

When did you see the show and what made you decide to book it?

The show would have been in the schedule before the recent election in Brazil, so you knew that it was going to be political. Was this something that influenced your decision at all?

Not particularly. We follow artists and whatever they’re making and whatever they want to say. So we don’t consciously programme political work, we programme Bruno Beltrão. Some of his previous work has been more abstract but this was definitely about what was happening. We don’t shy away from work that has a political edge but we don’t necessarily choose it because of that.

The last time Grupo de Rua performed at Sadler’s Wells was in 2014. Have there been any other Brazilian shows since then that have addressed the political situation in the country?

I’ve seen some recently. It’s a very vibrant scene there. It’s very hard to make work, to survive, but the work itself is very strong. So we may have some Brazilian companies coming to our stages in the future.

Given the recent situation in Brazil and the fact it has been so hard to make work there would you agree that necessity engenders creativity?  Within the Brazilian film industry the films being produced have become much more urgent. Would you say the same thing is happening in dance?

I think that’s absolutely true. I don’t necessary agree that things have to be bad to make great art, but it’s quite motivating if someone has some kind of tension to work with. That tension means they have something to say. When there is a situation like in Brazil with this work, Bruno just could not make a work that didn’t talk about what was going on. It was impossible for him. So that is true, that sort of difficulty does produce art, but it doesn’t always necessarily produce great art either.

Do you feel that the arts are getting more politicised? I noticed you’ve also programmed Akram Khan’s new production of The Jungle Book that’s set against the backdrop of the climate crisis?

Artists often respond to what is happening and what they worry about so again we don’t shy away from that. It just goes back to working with artists we believe in and they often respond to issues of different kinds. That’s really good because that speaks to an audience. And hopefully changes minds, even! What I liked about Bruno’s work was that it wasn’t explicit, it was all implicit.

We have to. It is hard but we’re going to keep doing it because it opens up channels of communication with other places, other peoples, and other cultures.

People who came to see Bruno’s work will begin to understand a little bit more about the situation in Brazil. Just through the bodies, for a start. That there’s a difference and that they have a different way of expression and of being. We might already have an ideal of Brazil – it might be football, or Bolsonaro – but actually these are the people. That exchange – both us bringing work from abroad and us taking work internationally – is so important in dance. It’s the way it lives. Dance exists because it moves, literally around the world. That’s the beauty of it too. It’s a lovely exchange. So it’s got to happen.

You’ve been at Sadler’s Wells for nearly 20 years now, do you see this as perhaps the most critical time for the arts?

It definitely is and there are a number of reasons for that. When I started it was hard, but that was more to do with where Sadler’s Wells was at the time. We had to make big changes, to be bold and that felt very exciting because it was the beginning of something. Now we’ve built this project and it’s so hard to keep it on its railway lines. First of all because for 15 of those 20 years we’ve had standstill funding, or even worse, as we had a cut this year because we’re in London. That means if you take inflation into account we’re almost 30% down in our funding in that time. Then you have the [rising] energy prices, the cost of living crisis and a little bit of a cut from the Arts Council, all of that together. Also coming out of the pandemic – which we sort of survived – but you realise it’s not as easy as it was before. So all those things are making it the hardest experience I’ve known in that time. In some ways with COVID-19 it was easier because it was clear we had to shut. We’re trying to keep going but it’s very difficult to get technical staff, to tour work, to get touring companies to come in, everything is much harder.

So we’re trying to balance the budget for next year and the thing is to keep the ambition going with all of those constraints. We do pretty well already in that only 12% of our money is from the Arts Council. The rest is box office, fundraising, bar income and catering events. We have to work hard to bring the rest in.

Do you think that might eventually have an effect on the programming?

I’m hoping not. This is the challenge, to try to keep that.

As I say to people, that’s why people come. And if people come then there’s income – obviously some things lose a bit because of the international travel – but generally it all adds up to the offer that we have to the public, to our donors, to our funders.

If you start the decline it’s very hard to get back.

I look at other cultural institutions and sometimes they’ve tried to programme things with a more popular appeal but there doesn’t seem to be that need at Sadler’s Wells.

If you saw the crowd at Bruno Beltrão there is a very a hungry crowd of people who want to see that sort of work. That’s maintained itself. The dance lovers – they just keep coming.

But we also run the Peacock Theatre and have a summer show: those are the areas where it’s much harder. Because it’s more discretionary. That’s the trick, to keep the programme enticing for people so they say “I can’t miss this or that or the other”.

Do you have anything else coming from Latin America?
There is a piece by Gabriela Carrizo in the Nederlands Dans Theater triple bill that’s coming in the spring. It’s titled La Ruta and it’s very surreal, almost David Lynch. She’s originally from Argentina but now lives in Belgium. I’ve seen it, it’s great.