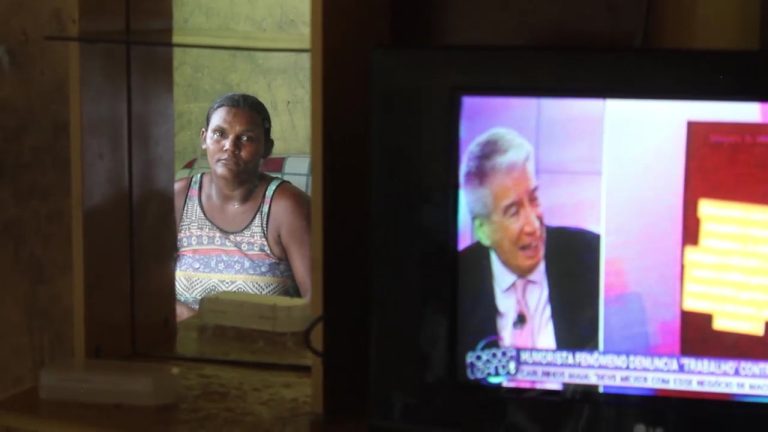 ‘Democracy Is At Risk’: An Interview with Director Victor Fraga

From the big media conglomerates to president Jair Bolsonaro’s inflamed rhetoric to WhatsApp and penis-shaped baby bottles, in Brazil, fake news is everywhere.

In Brazilian president Jair Bolsonaro’s live Thursday addresses to the public, the former army captain, who speaks fondly of the 1964 military regime, frequently casts doubt – without evidence – on the integrity of the nation’s electronic voting system, hinting that he may dispute an adverse result in this year’s elections.

The ambitious new documentary by Brazilian duo Victor Fraga and Valnei Nunes show how history often repeats itself. Using Brazil as a case study, the film The Coup d’État Factory uncovers and dissects the role of the media in creating the conditions to dismantle democracy and the centrists’ reckless efforts to instill institutional meltdown, paving the way for the far-right.

The film is due to be premiered in at least seven Brazilian cities before the country’s elections in October, and it’s that ticking clock that gives an urgency to the film’s main message: for people to refrain from being apathetic to the mainstream media whose main purpose is “not to embolden people but to manipulate”.

The film reveals how Brazil’s Jair Bolsonaro did not win the 2018 elections from a strong social media misinformation campaign alone, but much before that. The documentary, which was inspired by the 1993 British film Beyond Citizen Kane provides a scathing expose of how the Brazilian press, particularly Globo, have not merely been complacent to Brazil’s long-history of coup d’etats, but have actively supported them.

It portrays the deep-rooted bias inherent in the Brazilian press, driven by the personal interests of the political and media elite. The question under discussion is not exactly how to avoid the positioning of certain media outlets, but rather how to ensure there is cultural diversity and plurality amongst them.

The Brazilian media has a big problem with independence. The South American nation’s media scene comprises nine major conglomerates owned by nine powerful families who have built empires over the years. Six of them control over 70% of the information that circulates in the country. These “electronic colonels”, like the Marinho family who owns Globo, directly benefited by buying millions of Reais of shares in the media from the indebted government during the 2008 financial crisis, enabling them to reinforce their influence.

Despite the majority of these families having descended from immigrant families who originally protested against the establishment and championed republican ideals, over time, they have shifted their political stance to the right and have since, as the film argues, waged war on the left.

The case of Brazil also holds lessons for other countries across the globe, including the UK.

Fabricated news thrives on an atmosphere of hate that needs to be replenished everyday. And the UK is by no means an exception to this. An image and a name is all that is needed to incite the digital mob and as the film makes clear, the targets often fall on the left side of the political spectrum where images of political figures – from former presidents Luiz Inácio Lula da Silva and Dilma Rouseff in Brazil to Jeremy Corbyn in the UK and incumbent Colombian president Gustavo Petro – are often usurped by the far-right. The film urges people in the UK to not underestimate the maturity of its own democracy; that the nation is safe from coups and military intervention or to overestimate the power of history.

We caught up with Brazilian director Victor Fraga to find out more about his film, Brazilian politics and what can be done to save both young and mature democracies across the globe.

Your film provides a critical and scathing account of the mainstream media. What has the reaction to your film from the press been?

It’s a film that is highly critical of the mainstream media and our focus is on Brazil but media bias is by no means confined to Brazil, it’s a phenomenon that happens everywhere on this globe and there’s pertinent parallels to be drawn to the UK, which we do extensively in the film. The Guardian (which is mentioned in the film) is a very peculiar example. I worked at the Guardian myself for nearly seven years and their coverage of the coup was regurgitation at best. They did not take a partial view, they took a very, very biased view: that the Workers Party (PT) was deeply corrupt and that Lula was imprisoned for crimes that he faced. And even when all the charges against him were dropped, the media merely reported that he was freed on a technicality. So the media everywhere merely regurgitated the narrative that circulated in the media everywhere, that in 2016 there was an uprising against a corrupt government and that Lula has simply returned on a technicality. So the film is critical of all the media in Brazil and all the international media which have been extremely timid, silent even [towards the coup].

And why were the media so silent towards the coup?

The international media barely reported on the complexity of the political landscape in Brazil and painted Dilma and Lula as corrupt which is entirely absurd. Dilma was ousted because she was not complacent with corruption and the people that ousted her were the most corrupt themselves. So the corruption flag is an empty one. It needs to be qualified because the most corrupt people like to fly the anti-corruption flag. It means absolutely nothing. It’s what most of the authoritarians do: they say they are getting rid of corruption, it’s the lowest of excuses and the international media failed to recognise this. We’re simply asking that the mainstream media become more balanced and that they conduct self-criticism. They always demand self-criticism so we’re throwing it back to the media and we’re saying: now it’s your turn for self-criticism.

The main objective of the film is that people should not repeat the same mistakes as 2018. They should not hate the left, they should not associate the left with corruption because that’s what the media did. They created a culture of hate because when you have the PT and corruption on the same headline 100 times people believe it. The accusations all of a sudden become a reality. And people believe that the PT, the Workers Party, is intrinsically a corrupt organization, so we don’t want the baby penis bottle to win the elections again. The film is going to go on general release on the 31st August in Brazil and we’re going to make a little bit of noise.

The Jet Leaks uncovered by Glenn Greenwald shown in the film provide strong evidence of the parliamentary coup at play. What effect did they have?

They provide strong evidence [that former judge Sergio Moro was acting impartially]. Glenn Greenwald who published the leaks all of a sudden became a national hero. Bolsonaro eventually took legal action against him, but that was of course an unprecedented attack on press freedom. Glenn and his husband, who is a member of parliament, are under police protection, they live in a house that is under high surveillance. So I think I can say with confidence that their lives were in danger, particularly at that time. We’ve seen what happens to people who talk too much. We’ve seen the tragedy that has befallen Dom Phillips. We know the message that they want to get across with that. And Glenn Greenwald too could have undergone a similar fate. And that’s because of the weight of the leaks. They changed everything, they demonstrated what we have been saying for years: that this is lawfare. That the mere instrumentalisation of the justice system degrades and criminalizes a specific individual, or specific individuals, in this case Lula and other members of the Workers Party. So yes, the tables have turned. The Jet Leaks, the Vaza Jato were indeed a defining moment in the history of Brazilian democracy.

As you explained in the film, the media paved the way for the rise of Jair Bolsonaro. But they thought that they could tame his radical ideas somewhat. Right?

It puts the media, particularly Globo, in a very awkward situation. They created a beast called Bolsonaro to eat the Workers Party, they let the beast outside the cage and they couldn’t put him back in. So the beast came back to bite them in the butt. So Globo ended up in a very uncomfortable position because Bolsonaro’s [neo-liberal] economic project is indeed aligned with their interests, however, his rhetoric is too extremist for their viewers. He is too radical, too bitter to swallow, so they can hardly contain him. Globo wants to reach a wider audience in Brazil and the country is not reactionary in many ways. So if Globo wants to reach a broader population, it can’t embrace Bolsonaro’s deeply racist, homophobic rhetoric.

What we need to do first and foremost is get the fascist out of power, whatever that takes, because the stakes are very high. Democracy is at risk and the future of the Brazilian people are at risk, the future of the Amazon is at risk. Not just because of the Amazon but Bolsonaro is in power, perpetuating himself. He’s already tried to stage a self-coup so that he remains in power, he wasn’t successful but he’s going to try it again. The ramifications of a successful self-coup could be disastrous for the world. Trump failed at it and that’s wonderful but if Bolsonaro succeeds, all the countries where the democratic situations are very fragile, will see themselves as very vulnerable and the fascists in power will see themselves as empowered.

Can Brazil ever eradicate itself from a long-history of coup d’etats?

I certainly hope so. But it’s not going to happen in the next 10-20 years. In terms of the upcoming elections, I’m not concerned that Bolsonaro will win the elections. Bolsonaro has atrocious approval ratings. I’m very confident that Lula will win the elections. My fears are 1) for Lula’s life and 2) for a military coup. Bolsonaro keeps inflaming his base. Firstly by suggesting that the polls are fake, that electronic ballots don’t work, that they are unreliable. But he has never questioned that before. So he keeps on inflaming his base for that purpose.

Thank you so much for your time. Thank you as well for giving us a little bit more information about your film that has come at such a crucial time for Brazilian democracy and further afield.

Thank you! I hope you enjoy the film.

The latest news and updates from The Coup d’État Factory can be found at instagram.com/thecoupdetatfactory