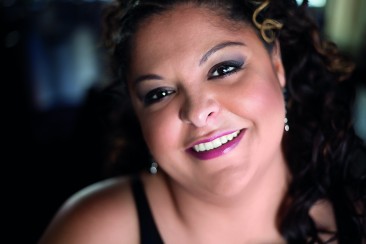 The first ever UK show by Brazilian songstress Fabiana Cozza has been long overdue, but it was well worth the wait.

Set in the rather dignified – and limp, it has to be said – surroundings of the Jazz Cafe in Camden, I wondered how an artist with such vivacity would complement a rather pedestrian venue, but from the first note Cozza had the crowd following her every utterance. We were treated to an evening of modern samba, old songs from Bahia, and repertoire from her new album.

Throughout the performance Cozza flittered between English and Portuguese with consummate ease, telling stories about the pieces, and of their important meaning to her. She performed many pieces from the Afro-Brazilian candomblé tradition, which were dedicated to certain deities and spirits intrinsic to the religion. These moments were spectacular, since she was evidently so moved by the music and her embodiment of the respective personae was truly a sight to behold.

She was accompanied by a magnificent, but modest, ensemble of a percussionist (from São Paulo), guitarist (from Bahia), and a multi-instrumentalist who switched between mandolin and cavaquinho throughout the evening. They complemented Cozza beautifully throughout the evening, and an interpretation of Vinicius de Moraes and Baden Powell’s “Canto de Ossanha” was a personal highlight.

As the evening drew to a close, Cozza drew the whole crowd into a circle in which everyone took turns to dance a traditional samba step from Bahia. This beautiful coming together was emblematic of the strong sense of community that is still very much held by the Brazilian population in London and vividly evoked through the songs that Cozza sang, and she was noticeably humbled by the wonderfully warm reception she received all night. Her final number was from her most recent album, a tribute to the late, great Clara Nunes, and it was a fitting conclusion to an evening which celebrated the great music of Brazil, and its long lasting legacy.