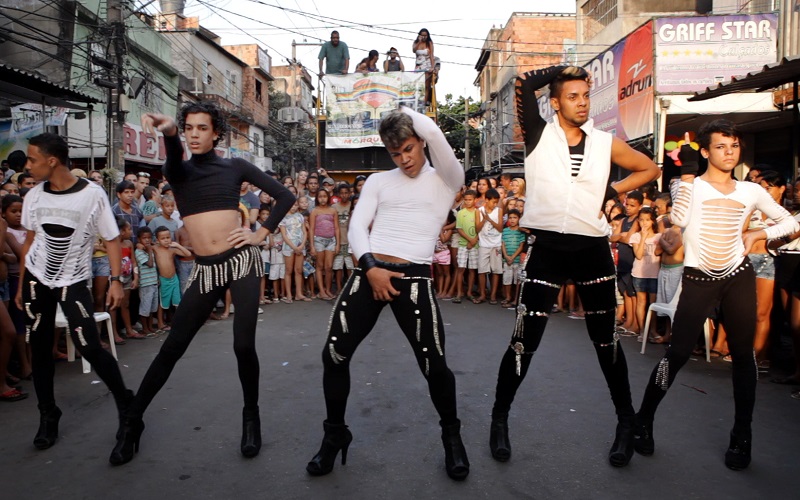 Favela Gay tells the story of eleven individuals in their own words. Living in eight slums (favelas) in Rio de Janeiro, these members of the LGBTQ community – two transgender women, a crossdressing man, a travesti (in South America, a person who was designated male at birth who has a feminine, transfeminine or femme gender identity) prostitute, a famous carnival dancer, two community activists, and even a young man who used to be transgender, but transitioned back – have fought prejudice and seen some of the most unsavoury sides of the city.

Coming out as LGBTQ anywhere in the world is difficult, and Rio’s favelas are no exception. “Our country is still dominated by a male chauvinist culture,” says Michelli, a travesti prostitute.

This chauvinist culture is in part perpetuated by a religious backbone that governs many citizens’ moral values. Martinha, a transgender woman, points out that in poorer communities, such as the one she has grown up in, individuals are very sensitive to the cultural norms imposed by religions, and that homophobia is a big part of this. Although same-sex marriage is legal in Brazil, and the country’s public health systems even provide free sex-change surgery, society as a whole has been slower to adapt than the law has.

The struggle with homophobia and chauvinism is not, of course, purely societal: it begins with the individual. Rafaella, a transvestite woman, claims that she did not struggle to come out to the world. It was her Evangelical mother whom she struggled to tell. They have, after years of estrangement, come to accept their differences, but Rafaella’s mother will not call her anything but William, her birth name, and will only refer to her using the masculine article. In this way, the struggle against prejudice is deeply personal.

In fact, the prejudice against people who see themselves as LGBTQ can be so deep-rooted that it seeps into the individual’s sense of self. As Carlinhos, a gay man says, “I have a prejudice against myself… My greatest barrier was myself.” It’s an important observation, and one that Favela Gay does a good job of examining. In a society that ostracises you based on your sexuality, you have first to learn to love yourself because you cannot expect society to show you how. In this way, it is a story of individuals who find self-empowerment in the face of a society that does not empower them.

“Feeling sorry for myself is not my style,” says Guinha. “I do not accept homophobia.”

This fortitude is probably the strand that ties the cast of Favela Gay together, because they are otherwise an extremely diverse group of people. They all happen to identify as LGBTQ, and they have all struggled in some way because of this, but other than that, they are hairdressers, students, dancers, activists… Even Dejah and Jeckie, a lesbian couple, serve to illustrate the spectrum of LGBTQ individuals. Dejah has many male gay friends, and likes to party in the gay clubs of their favela, while Jeckie has mainly female friends and doesn’t enjoy flamboyant gay culture. Jean Wyllys notes that “one homosexual is very different from another homosexual,” and perhaps that is the where the film is most successful: in representing the true spectrum of LGBTQ cultures, subcultures and individuals in Rio.

My greatest trouble with Favela Gay is that it is too short. There is so much going on, and we risk loosing some of the very diversity the film tries so well to represent by moving too quickly from each story. An entire film could have been made about Gilmara Cunha’s work with LGBTQ youth in her favela, about teenage boys and travestis doing sex work, or about being transgender and transitioning back, but at just over an hour, the film does not have nearly enough time to go into depth.

Favela Gay tells a story of resilience, but not in the blockbuster sense. This is a story of people who are considered to be in some way odd because of who they are, and who they love, but are deeply human, and like all other humans, want to “synchronise with their desire.” What unites the cast of the film is actually how normal they are, normal in the sense of flawed beautiful, complex and unique human beings.

Favela Gay is showing at Brazil Film Fest 2015 in Toronto