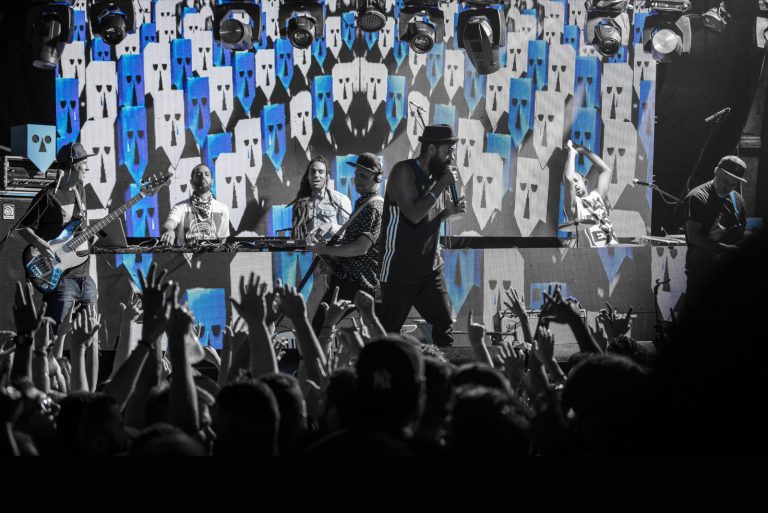 Freedom At The Heart Of Carnival: An Interview with BaianaSystem

BaianaSystem are one of the most exciting bands coming out of Brazil at the moment – more specifically, Bahia, the state with the strongest African cultural heritage in the country. Aiming to manifest and champion the sound of the Black Atlantic, their sound takes in deep and future connections between Africa, Brazil and the Caribbean, from the roots of samba to global bass culture. Founded in 2009, BaianaSystem operate as an independent DIY collective and this collaborative, open energy resonates in their music and is pivotal to how they’ve become the cultural force they are today.

The spirit of carnival is essential to the band, with the guitarra baiana, a mini electric guitar invented in the 1940s by Salvador carnival kings Dodô and Osmar, taking centre stage. Combining classic Bahian sounds and rhythms with dub-heavy beats and quick-fire conscious lyrics, BaianaSystem are a force to be reckoned with. “We went to have a chat with the Military Police ahead of our carnival shows this year… we had to explain that our crowd goes pretty wild when we play… to them it may look like a riot but it’s just that people dance like crazy”, reflects guitarist Roberto Barreto on the atmosphere at BaianaSystem shows.

We caught up with Roberto ahead of BaianaSystem’s debut UK show later this month.

There are clear Afro-Brazilian influences in your music. Was it a conscious decision to explore African influences or does it come naturally as part of living in Bahia? How does Jamaican sound system culture play into this?

I think the fact that we are from Bahia means that African influences come very naturally. Salvador is a city with a 95% black population and the African references in our rhythms, instruments, melodies, etc., are really strong. Also, at the time when BaianaSystem was starting out, I was presenting a radio programme called Radio Africa – I did the show for 11 years – and I did a lot of research into the music of Congo, Angola, Mali, and that had a big influence on my guitar playing style.

Sound system culture is a crucial reference for us. Russo [Passapusso] comes from that world – he was one of the founders of MiniStereo Público, the Salvador sound system that’s been going for almost 15 years. Sound system is there in the band’s name itself – combining the words “guitarra baiana” and “sound system” – BaianaSystem. We are really aligned with that dub aesthetic and sound, using a base riddim for many improvisations and also thinking of the guitar like a vocal line in the mix. We also have the trio elétrico, which we see as a mobile sound system.

Your shows at carnival draw an enormous crowd and everyone gets really into it. Can you put into words what carnival means for you and how it has shaped BaianaSystem as a band?

Carnival is absolutely central to the BaianaSystem aesthetic. Musically and visually, carnival is a touchstone for us. It’s a huge reference – a research site, a place of inspiration. It was the guitarra baiana that originally gave rise to the trio elétrico, so it was at carnival that all this combined with the blocos afros and Bahian samba with a sense of freedom from the outset.

We’re really interested in carnival as a social manifestation too. Carnival is very strong in the countries of the diaspora, Central America, South America, New Orleans and London, with the Jamaican presence. The social mix that comes together at carnival, the costumes, the masks, the drums – all of this inspires us and our aim is to be part of that and to contribute to it so that the freedom and social mix at the heart of carnival is not lost.

Your lyrics contain a lot of social and political commentary. For those that don’t speak Portuguese what are the main messages you are trying to get across?

Our lyrics are all about resilience, faith, awareness of what’s around you, the relationship between the internal and the external, micro and macro. The lyrics are also very much a process of looking within in order to understand what’s on the outside, connecting the intimate self with the external, the social, to explore utopias, seeking pathways through today’s world. BaianaSystem is made up of all these elements.

You have a really strong visual identity that goes along with the music. Can you explain a little about the imagery and particularly the use of masks?

BaianaSystem is in essence audiovisual. Since the start we’ve approached sound and image together and one gives meaning to the other. The first melodies, the first lyrics and beats, always went along with images, animations, visual contexts. The visuals we use at our shows and on our records complete the picture, so people understand what we are wanting to transmit.

The mask is a reference that comes from carnival, from popular festivals, from the countryside of Bahia. We always have masks at our shows. We realised that the mask is a very strong symbol in many cultures, whether it’s in the Far East, the African continent, Europe, etc. For us it gradually became a symbol of the band and a way to connect with people. At our shows, when we give out the masks to the public we create an immediate connection there before we even start to play. It’s about mystery, a non-being, a non-individual that unites everyone in a kind of collective identity. The mask is really closely associated with BaianaSystem now.

Your latest album Outras Cidades features an incredible set of remixes of tracks from the previous album. Did you create Duas Cidades with this intention already in mind?

Since we’re influenced by sound systems, and the language of [the] sound system, remix is a natural part of our work. The dub versions of our first album were included on the original release. When we play live we always do reworks – live remix versions of our own lyrics and melodies. When we made Duas Cidades we didn’t set out to follow it with a whole album of remixes but that’s just part of our process. Pretty soon producers and DJs started sending us versions because they understand that potential is inherent in our music.

What are you most looking forward to about playing in London for the first time? Are you influenced at all by UK music culture?

Playing London is important for us. It’s a big moment for the band. We’ve played at major festivals in many countries but this is our first time in the UK. Without doubt UK music has been a big influence and reference worldwide. From the classic British rock scene that changed the world, to the strong Jamaican presence in UK music culture – and the whole reggae sound that went global – London’s sound system scene, the punk movement… we could talk for ages about what London means to our band. I can guarantee you playing there is going to make us all feel very happy.

Who else should we be looking out for in the Bahian music scene?

Over the last few years Bahia has become established as a very important centre for cultural production in all genres. This has really always been the case but we’re in a moment when it’s really getting a lot of attention again. In the Bahian music scene, we could mention Orquestra Rumpilezz, Orquestra Afrosinfônica, Tiganá Santana, Lourimbau, Vandal, Josyara, MiniStereo Público…

Finally, what’s next on the horizon for BaianaSystem?

We’re heading out on another international tour and playing in different countries always has a strong impact on our music. At the moment we’re also focused on preparing new material, immersed in researching our ancestral roots, our connection with Latin America and all of its musical and political influences, trying to reach a deeper understanding about our origins and produce new works out of that – looking inside ourselves to understand the world and using this perception for positive collaboration.