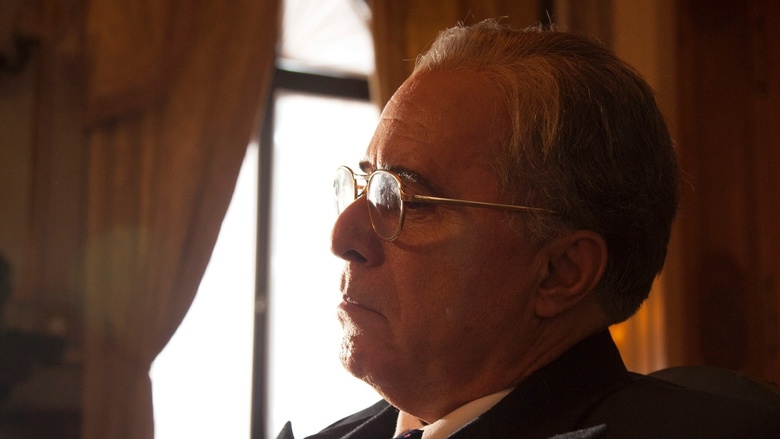 Getúlio, a new film about Brazilian president Getúlio Vargas by João Jardim, reminds me somewhat of Lincoln, the 2012 film about the American president of the same name. Both films focus on crucial events in the lives of their titular characters, both towering figures in the history of their respective countries, shortly before their deaths. Both are beautifully filmed with attractive period touches – the 1950s are palpable in Getúlio’s classic automobiles and fashions, especially the thick, black-rimmed glasses. But the differences are telling: Abraham Lincoln, as portrayed by Daniel Day-Lewis, was a man in control of the major events of film (at least until his assassination, of course); Getúlio Vargas, portrayed by Tony Ramos in this 2014 film, was a man losing control and beset by paranoia until he decided to take his own life.

Getúlio starts with the attempted assassination of Carlos Lacerda, a Rio journalist and implacable opponent of Getúlio, in August 1954. Lacerda survived the attempt on his life with minor injuries, but Air Force Major Rubens Vaz was killed in the attack. From here, the film becomes something of a political thriller, a fast-moving “whodunit” punctuated by a tense score that is occasionally overdone. The evidence implicates Gregório Fortunato, head of the president’s bodyguards. Although denounced in fiery televised speeches by Lacerda and by congressional opponents who demand his resignation, no evidence directly ties the event to Getúlio Vargas, and he refuses to resign. But his situation becomes increasingly untenable; the officers of the Air Force and Navy join in the calls for his resignation. Practically everyone but his loyal daughter, Alzira, and his son Lutero, abandon him; even Vice President Café Filho offers to resign with him. With a taste for drama that is not clearly evident in the film’s version of Vargas (but certainly was in the historical Vargas, who at times flirted with fascism, nationalized the oil industry, and became the figurehead for the U.S.’s ”Good Neighbor Policy” in Latin America during World War II), he shoots himself in the heart rather than acceding to these calls.

The film’s tone is somewhat uneven. By focusing on a conspiracy that never quite touches but gets very close to the chief executive, it is hard not to think of the more recent intimations of corruption that have dogged Brazilian presidents Lula and Rousseff. Rather than Spielberg’s lionized Lincoln, a leader whose competence and goodness far exceed the American politicians of today, Jardim’s Vargas is yet another disappointing leader that modern Brazilians are all too familiar with. But the film ends with what are its most moving scenes: historical footage of ordinary Brazilians mourning the death of “The Father of the Poor.” Right before the credits, Jardim shows a quotation from Juscelino Kubitschek arguing that Vargas’s suicide forestalled the coup of 1964 by ten years. The tired, out-of-touch president shown throughout the film then seems to become a martyr. In order for this ending to fit, the filmmakers should have shown more of the charisma and compassion of the real Vargas that resonated with the ordinary Brazilians who passionately mourned his death.

Getúlio is showing at the Brazil Film Festival of Toronto (Nov 27th-30th).