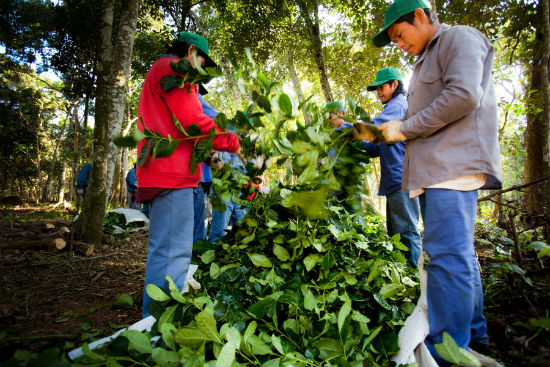 Yerba mate is the Southern Cone take on that ubiquitous drink/food/dance you are told you must try when you visit any foreign country. You receive it, take a sip and wait for the person in front of you to inevitably smirk when you inevitably grimace at the bitter, astringent taste. It’s a reaction that, for all of its humour, is also a small but significant representation of the drink’s status as a cultural totem, as something that belongs to the local population, and which, as a visitor, you are permitted to enjoy, find curious, but which ultimately remains just that little bit out of reach as yours.

The taste, I get. It’s smoky, malty, deep and always bitter. The equipment you need? That too is fairly complicated, a dazzling array of bombillas, mate gourds and flasks await those looking to take their first steps on the road to becoming a cebador. It’s not an easy drink to love, but maybe that’s part of the appeal. There is, however, one company that is managing to change the perception of the drink, or more strictly, the leaf, in faraway markets, and doing a whole lot of good at the same time.

Guayaki co-founder, Argentine Alex Pryor remembers his first brush with the confusion that characterises people’s first glances. “I sat down in a lecture, mate in hand, and the professor of my class told me that I wasn’t able to smoke in the hall!” he recounts. He’d been drinking mate, like any Argentine, for years, counting on the caffeine boost and mental clarity that a good few sips will bring to help get through those long nights studying. But, as his professor and many others had shown him, the drink was misunderstood, misrepresented and unknown in North America.

It was, as he explains, “a dream that became a reality”. Yet Pryor knew from the very beginning that the traditional way of drinking yerba mate came with a certain dogmatic narrowness. It didn’t fit in with the lifestyle of his friends in the USA. He had to innovate, to become that bridge between the two cultures. The resulting yerba mate-based drinks, managed to do just that. The design channels the drink’s South American heritage, but it’s packaged like any other quick buzz pick-me-up that you’d find on the supermarket shelves.

Easy then, to fall into the trap of distancing the product from the culture that produced it. The small glass bottles and bright, tropical packaging would, to be perfectly frank, be no more recognizable to a Uruguayan gaucho than the flask and bombilla would be to a Californian surfer. Yet for Pryor, the use of this herb brings with it a certain social and environmental responsibility. It started with a clear objective, from a personal experience rooted in witnessing environmental devastation.

The Mata Atlántica rainforest hides a biodiversity clearly, painfully and brutally ignored by those who have provoked devastating deforestation in the region. Spanning parts of Paraguay, Argentina and Brazil, it’s natural wealth is crippled by bureaucratic inefficiencies, corrupt politicians and a rapacious desire to continue ‘development’ at all costs. Seven percent of the original forested area remains. It is also, incidentally, a perfect place to grow yerba mate. Pryor saw in this pristine ecosystem an opportunity just like many other prospectors had seen. Yet his vision depended on the roots, trees and soil staying put.

The result was a deal that allows small producers to make money from selling the yerba mate that grows in the shade of those beautiful trees and that now allows Guayaki to set its targets not just on the balance sheet, but on the number of jobs it creates, on the region it spreads knowledge of, and most importantly, on the number of hectares it helps protect. A certified B Corp, the company has set the target of regenerating 200,000 hectares of forest and creating 1,000 living wage jobs by 2020. Jobs that are, crucially, based around preservation of an ecosystem and better understanding of the land, and not based on the sadly all too familiar emigration to the outskirts of the urban centres that many young people see as their only route to economic autonomy.

It’s a rare thing when a drink manages to transcend cultural barriers. Yerba mate is such a drink. It represents a region, and a way of life that people are keen to preserve. Guayaki, as both a company and a product, tries to straddle that gap between cultures and offer its consumers a product that has purpose. Their job is tough, the history of deforestation in Latin America is unfortunately well entrenched, but through an innovative approach Pryor and his team are doing their best to halt the chainsaws and encourage more people to encounter this marvellous little leaf.