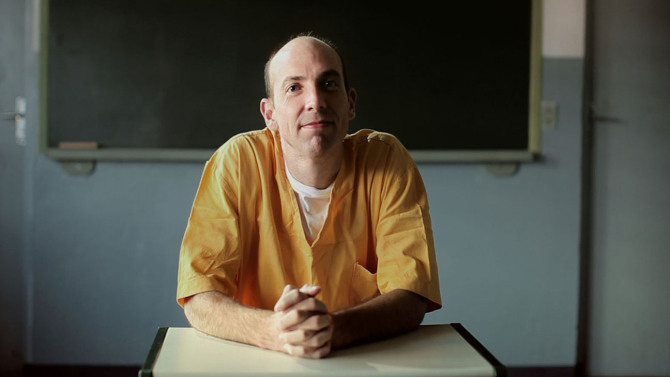 I Touched All Your Stuff

When Brazilian film-makers Maíra Bühler and Matias Mariani won a competition to make a documentary about foreigners in the country’s jails, they quickly reduced it down from the general to the particular. The particular was American, Chris Kirk.

The reason for this is soon clear. Kirk’s story isn’t typical. It involves a classic reversal of roles, an eye-watering level of naivety, a love affair, drugs, pathological lying, incarceration, escape, but crucially a sense of adventure. He’s a wide-eyed adventurer or as near as one can be in the modern world without falling off a mountain, getting frostbite or having a high octane death-wish. Anyone who believes that a 1% chance is worth a go, clearly isn’t going to think that if something seems too good to be true, then it probably is. If that’s how you see it, too, then Kirk’s your man. Oh, and one other thing, he’s obsessed by con artists and at home has just about every book published on the subject.

What follows is a neat piece of work and an intriguing story.

Been there, done that

In the opening scene the narrator asks, “Where does the explorer go when it has all been explored?” Where indeed?
Kirk, a computer nerd from Olympia, Washington, wants something more than the American Dream. When this dream shares so many of the “qualities” found in Renton’s speech in Trainspotting, who wouldn’t? Conversely, when the philosopher Thomas Hobbes extolled the virtues of political community in Leviathan, he couldn’t have imagined that life, for many, would no longer be “solitary, poor, nasty, brutish, and short” but mind-numbingly dull. Cue: sound of golf balls being hit or a lawn mower in operation.

We get a flavour of this overbearing tedium, when a naff practical joke by a friend, leaves the interior and contents of Kirk’s flat covered in tin foil. Suddenly, it’s a media sensation and he’s “The Tin Man” (of Wizard of Oz fame). Is this his 15 minutes of the fame? Every media station from local downtown Olympia to CNN wants in and he wants out.

After reading an article on Pablo Escobar’s feral hippopotami, Kirk develops an irrepressible desire for wanderlust and it just so happens that an old high school friend, who is now a pilot, is based down at the US embassy in Bogotá.

An innocent and a broad

Kirk rolls up in Bogotá, he leaves his stuff at the hotel, goes for a drink with his buddy and is in love with the enigmatic V, a Japanese-Colombian beauty, all before nightfall. That might happen in Olympia or Seattle, but you wouldn’t bet on it – not even if someone offered you odds of 100/1. As our hero says later, “Colombia is a crazy place.”

When Kirk appears in prison garb you imagine that this is just another drug courier story but there is much more to it than that. One the interesting things about the film is that it uses Kirk’s own hard drive for a lot of the source material – thus the title – which is then spliced with interviews with friends and associates, MSM, Skype, Doug Stanhope sets, Joseph Arthur songs, Kirk’s own videos and a quite stupendous piece of puppetry which shows Pinocchio playing a lute and being swallowed by the whale. The Pinocchio insertion seems wholly gratuitous but his desire to be real and to experience the world is much the same as Kirk’s, yet real also means participating in the human masquerade.

V is for vicarious

The object of Kirk’s desire, V, is an enigma to him. She a girl of modest means with a passport full of stamps, dark glasses, contacts everywhere, unexplained disappearances, two cellphones and one battery, hand luggage only, expensive tastes, no discernible means of support and seems to have a guy in every airport. Kirk’s infatuated. This is the girl of his dreams.

Kirk’s friends, though, are not impressed. They say she’s vain and superficial. He can only see V. Why? Because he wants to. He’s innocent, idealistic and trusting, sometimes to the point of folly as it turns out, yet there is something endearing about his desire to go with the flow, or more correctly, where fantasy and desire take him. He likes the journey precisely because it is his. But the journey is convoluted and involves many other people like Kirk, such as John, Isaac, the Mexican, the Japanese, the Puerto Rican, men in Tucson, Virginia, Florida, Chile… Essentially, Kirk is with a professional liar from whom he expects honesty.

In the end his feelings of unease get to him and despite knowing it to be unethical, he decides to hack into V’s email account. He finds her password to be mentir the infinitive of the Spanish verb to lie. He also finds that he is part of a pattern and shares email and MSM notes with those who are similarly intoxicated by this femme fatale.
Kirk, though, is a man who’ll bet everything on 1%. He makes it up with V and later they live for a time in Bogota. It doesn’t work out and he moves out. However, he keeps in touch.

A one point the film-makers say of Kirk that he always traces his own logic but never hers. This is true. V likes her percentages higher and strategically placed. Say, 99%, but to conclude that she has no interest or attachment to any of these men – beyond utility – is to assume too much based on too little. The story is after all Kirk’s and it is almost exclusively told from his standpoint. If boredom is Kirk’s mainspring, what is V’s? Is it what Kirk would throw away? We can only guess.

At São Paulo airport on 16th February 2009, Kirk arrives with a suitcase with two false bottoms and 7.5lbs of cocaine in two bags. He’s banged to rights. Four years on he’s released on parole but restricted to the city limits. During the same period he opts to cease contact with the film crew but continues to post videos on his Youtube account.

In one he sits in the Bar do Arante, Florianópolis, a place plastered with messages, and leaves one of its own. It says “Wanted!” and contains an accurate sketched mugshot and a description. Thence he records his journey in a pick-up truck en route to the Brazil-Uruguay frontier and home.

To Fats Waller singing “Ain’t Misbehavin'”, Kirk, now back with friends in the US says, “I had the strangest dream I was in South America.”

I Touched All Your Stuff is currently showing at Cinema Village, New York.