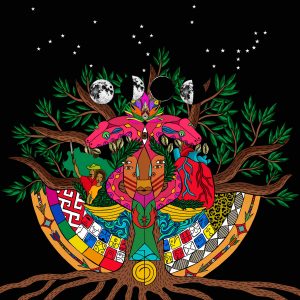 With a title translating as “the sky has been old for a long time”, the album in its entirety is a political wake up call to his native country, and further afield, acknowledging the dark times we are living in and the need to act. Following public outrage regarding the continual destruction of the Amazon, which continues to shake the media with grey smoke rising from the ashes that smeared São Paulo’s skyline, this album couldn’t have come at a more pressing time.

The album strips back to the country’s bossa nova roots of the 50s and 60s, following the footsteps of his 2009 album Sem Nostalgia, but bringing little more than a voice and a guitar fused with his own avant garde sounds for a post-modern touch. The result is an unworldly compilation that takes us on a journey through diverse musical universes; deep into an intimate, soulful, human experience, then thrusting us back into the natural landscape. While the album is the third release by Santtana on the French label No Format!, it’s very much Brazilian in essence.

On “Brazil Patriota” we are reminded of the beauty, wildness and fragility of nature. In his passionately political calls, he directly targets the corrupt “patriotas” who are perverting the country’s human and justice systems from the top down. The pain of the deforestation of the Amazon is felt; where in Brazil, these “patriotas” have put in place a fatal approach towards architecture; legalising the possession of fire arms and encroaching on to indigenous lands in Amazonia. The album acts as a parlous voice for his country to stop, listen to the birds and allow nature to rebel against man. “We’re living in a time in which everybody is talking loud”, he observes; “I thought the time had come to whisper into people’s ears”.

Over the years, Santtana has gained international acclaim with a string of polycultural, experimental albums that encompass a wide range of musical genres, languages and sounds; from his Modo Avião album that probed questions of the human experience in the age of capitalism and 24-7 digital connectivity, to nods to electronica, hip hop and dub on 3 Sessions in a Greenhouse. Here, he keeps O Céu é Velho Há Muito Tempo strictly Portuguese and Spanish in language, returning to his home country to confess his love for his nation and provide a cautionary counsel to his people.

He adopts a harmonious musical style on the album, examining a topic in order to dictate the social, political and cultural balance of his country. Life, love and beauty can exist in darkness if you just stop and look. It’s a sentiment perfectly captured on “Meu Primeiro Amor” (featuring Duda Beat), whose sweet serenades momentarily tip us into a personal space and outside the public realm. But quickly, we are shaken back into more wider social concerns with “Todo Se Transforma” (“Everything will Transform”) alluding to a powerful force of resistance to oppression.

By drawing on the country’s bossa nova roots, as he did on Sem Nostalgia, he brings the past to the fore-front, thrusting us into the future and then back into the present, as a way of embracing the now whilst also being cautious of the future that man is currently creating.