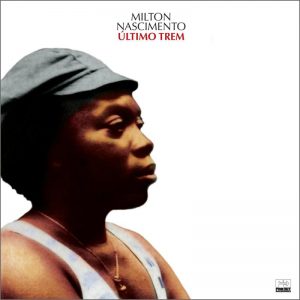 Anyone who’s been bound by the spell of Milton Nascimento‘s ballet score, Maria Maria, which was re-released at the end of last year, will be delighted to hear that Far Out Recordings is releasing its ‘sister score’ as a double LP – on red vinyl no less – to coincide with Record Store Day. The even better news is that it’s more of the same: that is, the same kind of sonic tapestries woven together with the kind of beautiful wordless vocals that has been this remarkable singer’s trademark for decades. While Maria, Maria brought us the celebrated title track and “Lilia”, previously heard on Nascimento’s collaboration with Wayne Shorter, the jewel in the crown of Último Trem is probably “Ponta de Areia”, also on Shorter’s Native Dancer.

The two scores are a pair of non-identical twins. Both are co-written by Nascimento with his collaborator, Fernando Brant, and both employ rich choral support and such alumni as Naná Vasconcelos and João Donato. Premièred in 1980, four years after Maria, Maria, this one (more or less) starts and ends with the sound of a train. On first listening, and knowing nothing about its background, your correspondent here, Doctor Doom, envisioned a Brazilian take on the Auschwitz horror. But it’s nothing quite so bizarre or tasteless. Sad, yes, but not tragic. Último Trem translates as the “last train”, and the ballet was inspired by the military junta’s closing of the line that connected the townships of Minas Gerais to the coast in Brazil’s north-east.

Endearingly, it reflects the co-writers’ shared passion for all the associations with trains – and the singer himself reveals that when his travels take him to the US or Europe, he travels by train whenever he can (“the longer the journey the better”) – but the prevalent note is one of nostalgia and sadness for the impact the closure had on the area. The aching beauty of “Abertura Minas”, for example, just Milton and a piano, serves as an overture before the sound of a steam train ushers in the first appearance of “Ponte de Areia”, perhaps the artist’s loveliest of all melodies. A gradually quickening drumbeat takes up the motif of the train on the more celebratory “Povo da Raca Brasil”, before a train whistle prompts a similar rhythm played on Nascimento’s acoustic guitar on “A Viagem”, whose central interlude conjures up the evanescent scenery of a trip by train. “A Lua Girou”, with voice, acoustic guitar, delicate percussion and hummed choral backing, exquisitely captures the elegiac essence of the album, while the pair of tracks that follows – “Bicho Homem” and “Decreto” – are more atypically urgent and upbeat.

But there’s little sense in trying to describe the effect of all the other diverse and variegated numbers that build to the final, second appearance of “Ponta de Areia” at the end of which a plaintive train whistle brings this musical journey to a halt. Suffice to say, perhaps, that everything has its place and there’s a reprise of “Saidas e Banderias”, first heard on Milton, one of Nascimento’s best known songs and one of the highlights of an album that offers evidence of this remarkable artist at something approaching his best. And who knows, Último Trem might even strike a chord with uninitiated train enthusiasts the world over.