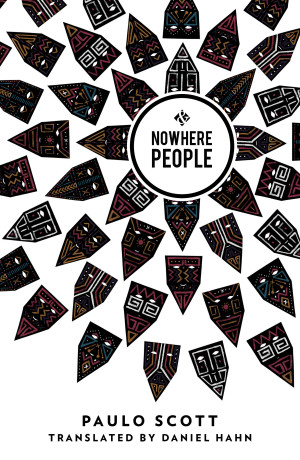 With Nowhere People, Paulo Scott has written one of the most daring novels of Brazil’s contemporary literary scene. It is a work which gives a voice to the underclass of Brazil’s indigenous population, and addresses the delicate relationship that middle class Brazilians assume in order to try and improve many of their living conditions. It comes at a crucial time, amidst the dissatisfaction surrounding the World Cup, and powerfully informs and provokes.

Paulo, a middle-class trainee lawyer in his early twenties, stops to give 15-year old Maína, an indigenous girl living in an encampment by the side of the road, a lift – an action from which the entire narrative flows and explodes. Maína is by far the most interesting character of the novel, a strong-minded young woman, unquestioningly true to her principles and indigenous upbringing. Until, of course, she meets Paulo. We see Paulo undone by her, resolved to help her, yet only exacerbating the process by his inability to gauge the subtleties of lifestyles and beliefs different to his own. Paulo and Maína paint a vivid portrait of the tensions implicit in such a relationship, yet unfortunately this comes to a conclusion all too soon, and other less interesting strands wander into the narrative.

We meet Paulo years later, teetering on the fringes of the law in London, and Donato, his and Maína’s son, adopted into the nuanced intellectual middle class of São Paulo. Donato is at odds in this latter world and the second half of the novel concerns his deep-rooted urge to create an identity for himself, to reconnect to his mother’s heritage. It is a noble exploration, yet never entirely convincing.

The novel seems to be sentiment-driven, as opposed to character-driven, a style which reveals moments of startling, brutal poetry. Yet overall, as a result of this, the protagonists, apart from Maína, remain somewhat two-dimensional. Scott has chosen to weave a novel from shards of humanity – of lust, longing, despair, deceit – which, though often tragic, seem to be constructed from telenovela clichés – incest, and familial lines reconnecting with scant emotion. There are also frequent, bracketed interjections, which appear to be those of an omniscient narrator. These constantly drag you out of the novel’s world and into the head of the writer, which somewhat undermines empathy for the characters, instead making you feel acutely manipulated by him. This may be no bad thing, but sits uncomfortably with such a pertinent subject matter.

Nowhere People is a highly readable book, and an interesting insight into the lives of Brazil’s indigenous people, and the inherent conflicts in paving harmonious paths for these communities in modern Brazil. A worthwhile read, but perhaps one that would have worked better following one narrative strand in depth rather than several superficially.