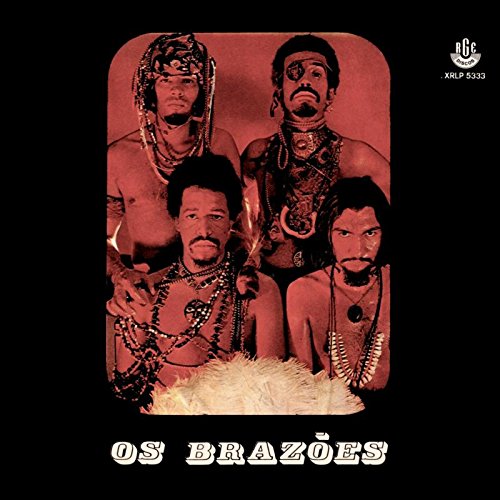 Formed in Rio de Janeiro in 1968, Os Brazões started life playing support for Gal Costa and Tom Zé before RGE Records gave them the chance to record this album.

And what an album it is. Something of a highlight for lovers of the late-60s Brazilian vibe, this reissue gives the rest of us a chance to hear what we’ve been missing for so long. On the face of it, it’s another example of a decent tropicália record, a fine blend of Brazilian roots music, psychedelia and rock. And almost to set out their stall in this department, the album is peppered with alternative versions of songs by the movement’s stars: Gilberto Gil, Jorge Ben and another overlooked band, Liverpool. But, as with all great groups, Os Brazões make them their own, twisting them up, running them through the wringer and spitting them out.

The driving guitar riffs grab you straight away on the opener, a cover of Gil’s “Pega A Voga Cabeludo”, with fuzz and wah-wahs fully cranked up. Elsewhere, with their take on “Volks Volkswagen Blue”, Gil’s laidback version is turned into a freak-out party track. “Carolina Carol Bela” (originally by Jorge Ben) is delivered as a stripped back jam session; whereas Liverpool’s “Planador” is over-psyched with beefed up effects and lush arrangements.

But it’s on their own songs that Os Brazões really shine. On “Canastra Real”, the band open up, playing with time signatures, effects and harmonies to deliver an incredibly dense track that still manages to come in under three minutes. And with “Espiral”, the scrappy beauty of Eduardo “Edu” Rocha’s drumming is combined with some punchy horns to deliver the funkiest cut on the record.

Exploring this mix of covers and self-penned songs, you get a genuine feeling for the influences, tastes and direction of the band – raw fuzz rock, foot-stomping R&B, plus their own scenes’ love of playful experimentation. When put alongside albums from the same era, such as Gilberto Gil’s or Gal Costa’s eponymous 1969 releases, Os Brazões come across as a far grittier version, with a record that probably deserves to be ranked alongside Os Mutantes’ early output.

By no means is this a perfect record but, as a release that gives you a more complete picture of the late-60s Brazilian music scene, it’s great. And as a record that will make you groove, go-go and freak-out, it’s a must.

Os Brazões is released by Mr Bongo Records and is available from Amazon UK, Amazon US and iTunes