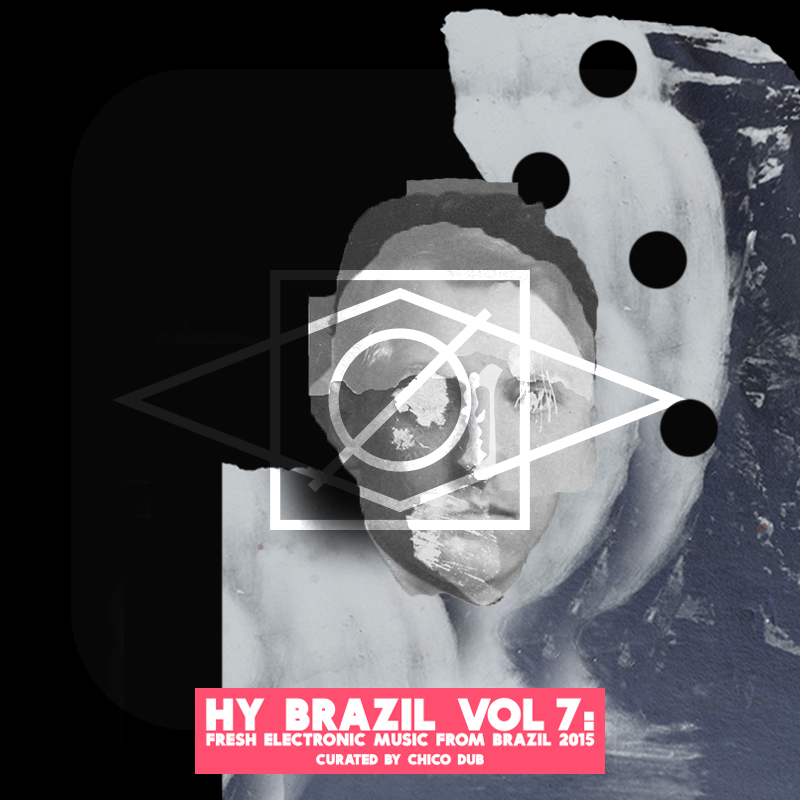 Incredibly, Hy Brazil are now up to their seventh compilation. The series, which started in 2013, has been one of our go-to-sources for finding out about the best experimental and electronic music being made in Brazil, responsible for introducing us to so many great new innovative Brazilian musicians. Including this latest compilation, Hy Brazil have showcased 98 different artists from Brazil in the last three years, making them true doyens of promoting new talent.

Compiled by Chico Dub (responsible for curating the Novas Frequências festival, as well as writing about experimental Brazilian music for many publications), Hy Brazil Vol. 7 continues the theme of previous compilations, featuring 14 unreleased tracks by 14 new producers from across Brazil.

Listen/download Hy Brazil Vol. 7 below. The compilation was compiled by Chico Dub and features cover artwork by Julia Liberati (the Hy Brazil logo was designed by Antonio Simas):

Find out about the producers involved below: 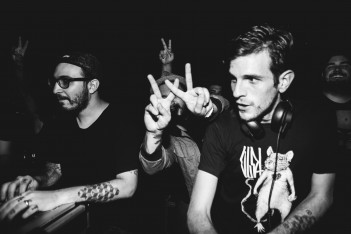 Wobble is a DJ and producer collective based in Rio and São Paulo who aim to spread bass music culture in Brazil. Formed by Fabio Heinz, Rodrigo S and Marginal Men (a duo formed by Gustavo Elsas and Pedro Fontes) they always present themselves alongside other national and international talents. From baile funk to house, from trap to grime, Wobble are breaking barriers and redefining styles within a scene that still crawls from many independent efforts.

Despite being together since 2012, it was only in 2014 that Marginal Men began producing music, resulting in the “Shake That Crack” track collaboration with São Paulo’s CABLE producer. Since then they have worked with producers and MCs like MC Brinquedo, MC Bin Laden, Pesadão Tropical, Ruxell and Portuguese producer Branko from Buraka Som Sistema and head of the global bass label Enchufada.

From Belém do Pará hails Kid From Amazon, a chillwave music project that started in early 2014 with some drum ‘n’ bass, techno, noise and indigenous rhythm elements. The search for an ideal soundscape only extends the synaesthesia which proposes the tracks’ content. 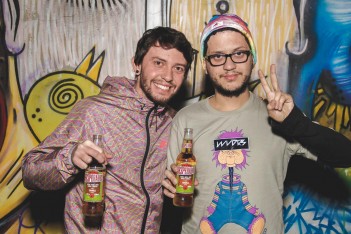 DJ and producer from Curitiba, Luis Ricardo Ramos AKA Swinga is ½ of the Sweet Grooves project and the creator of the INVDRS party. Always open to new references, he is constantly seeking the newest music trends, without forgetting all the national references.

Known as “Chico Correa”, Esmeraldo Marques is one of the pioneers in the fusion of Brazilian north-eastern music with electronic sounds. He represents a new generation of Brazilian bass music producers, focusing his artistic creativity between the oral traditions of his land and the low-end frequencies of sound systems, blending TR 808 and analog synths with cocos de roda and emboladas.

“ToDestroySomethingBeautiful is not an alter ego. It’s another person.”

Bringing together fragments of memory, Akin (from Metanol Fm collective and web radio) takes another character, a new persona, bringing particular meaning to sound memories absorbed since childhood. Using slower and drawn-out BPMs, ToDestroySomethingBeautiful tries to slow the perception of the passage of time, a perpetual exercise of rescue and deconstruction of some experience. All the elements that are part of its composition universe are actually in ethereal state of decomposition, buried under dense emotional and affective layer. 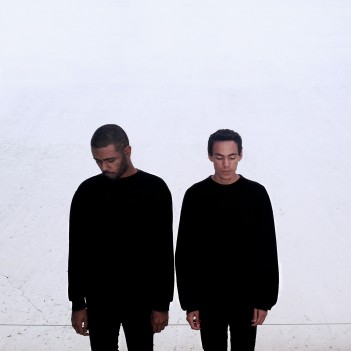 Formed by Maur Rock and Ramon Campos, TERR0RISM is a musical duo from São Paulo. The project evokes the most pure and impure feelings, combining them with beats, snares and echoed voices. With fragmented sounds that exude melancholy and distorted synths, the duo’s performances make people lose control on the dance floor.

Formed in 2011, African Hooligans is an experimental electronic music project formed by Marcos Felinto, Everton Adrade and Guilherme Henrique. They have four albums released independently and recently had their new EP, Prelude, released by the São Paulo label Fluxxx. Afro Hooligans establish dialogues with many genres, ranging from harsh noise to pop through glitch and witch house. 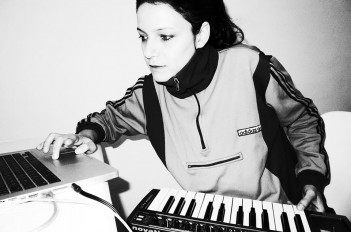 Based in São Paulo, Raquel Krügel is an electronic music composer and illustrator. After graduating with a master’s degree in music philosophy, she has travelled the world for three years using only a laptop for the production of her audio visual work. 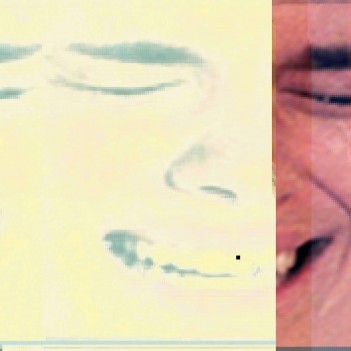 Dieckmanns is a semi-concealed project that incorporates disparate elements such as television iconography and the ambience of Chicago house.

From Brasilia, ˆL_ (pronounced “control L”) released his debut album Love Is Hell in 2014, a record full of IDM and ambient techno with some noise and drone elements. Also released by the Berlin-based imprint ANTIME, the 12″ The Outsider sees the Brasilia producer going for a more dance floor-orientated sound, be it 90s-style techno, eerie techno/house hybrid, hard-hitting break-beats or allusions to 2-Step. ˆL_’s sample-heavy aesthetics are as distinctive as they are cohesive.

Daniel Vojevodovas aka Ftureable is a hip-hop and trap producer from Pelotas, Rio Grande do Sul, that is very fond of slow beats.

Daniel Limaverde hails from Rio de Janeiro and recently featured in the Red Bull Music Academy in Tokyo, Japan. Being the son of the Brazilian singer-songwriter Ednardo, Limaverde showed a strong interest in music since an early age, teaching himself and pursuing his love for music with influences like Arvo Pärt, Charles Mingus, Björk, Tom Waits, Matthew Herbert and Ricardo Villalobos.

Limaverde’s music grasps a clarity of spaciousness even though it’s formed by many moving parts, having a particular style that uses the time length of a song as a foundation for constructing a spatial site where elements like notes, timber and texture are used like three-dimensional visual motifs. In fact, visuals have taken much of the modus operandi of this 24-year-old producer who released his debut with a 30-minute audiovisual performance. In October 2015, Limaverde embarks to the USA for a month-long road trip with 24 another musicians from around the globe, as part of the OneBeat residency program. 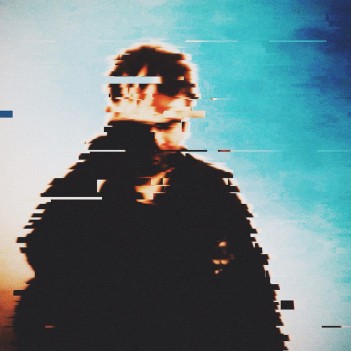 Completely obsessed with analog gear, big sounds, glitch and processing errors, the Berlin-based brazilian producer QRG, the alias of Guilherme Queiroga, makes dark and gritty techno and IDM. The project was born in NYC in 2011 where Guilherme was studying audio engineering. Full of earthy textures and ethereal moods, his last work, the EP Pause One, used a broken and detuned piano as a starting point. The recordings were inspired by old stone and marmore structures. “I rushed, I dragged and I didn’t re-record. What’s broken is broken and was meant to be like that, things are not perfect and I made sure I am not trying to fool myself.”

Listen to all of the Hy Brazil compilations at chicodub.bandcamp.com