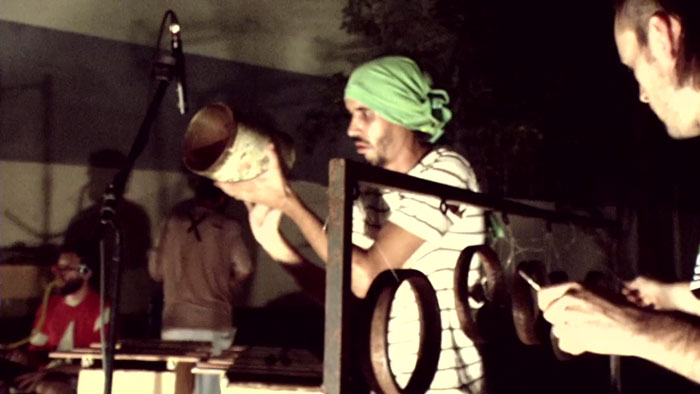 We’re delighted to be able to bring to you the première of a startling performance from Vida Seca, an experimental samba quartet from Goiânia in the central-west of Brazil. The group grew out of a larger percussion ensemble called Trash Block who used recycled rubbish as their instruments. Keeping this idea intact, Vida Seca have maintained the use of trash for making music, as well as crafting their own instruments, to play a wide range of rhythms from Brazil, Africa and across Latin America. The group have also extended these ideas into their community, creating workshops under the name of Lixo Ritmado, Rowdy Recicla-do (“Rhythmic Waste, Rowdy Recycling”) that allows people with no access to instruments to create their own.

The group’s singular sound comes to life in this video premiere recorded live in Goiânia by nomadic French film-maker Vincent Moon as part of his Petites Planetes series.

Vida Seca’s latest album is Som De Sucata and is available from Novomundo, a Brazilian-focused record label based in France. The group will be playing at Goiás’ Festival Internacional de Cinema e Vídeo Ambiental on August 13th.