Nation Beat‘s ability to meld American and Brazilian roots music seamlessly has never been as evident as on their latest EP, Carnival Caravan, a simmering summer-ready release which sees the Brooklyn-based group – led by maracatu master percussionist Scott Kettner – unite the songs, rhythms and instruments of Northeastern Brazil with those of New Orleans. “Golden Crown”, premièring here, is the perfect example. Here’s Kettner to explain a little about the track’s genesis:

“‘Golden Crown’ is a traditional song from the Mardi Gras Indian traditions. This song features Fabiana Masili from Nation Beat and Spy Boy Honey Banister from Cha Wa on vocals. The song opens up with Fabiana singing the chorus on top of a maracatu rhythm from Brazil and then morphs into a New Orleans Mardi Gras Indian groove. This is one of the first times that you will hear a female singing lead on a traditional Mardi Gras Indian chant.” 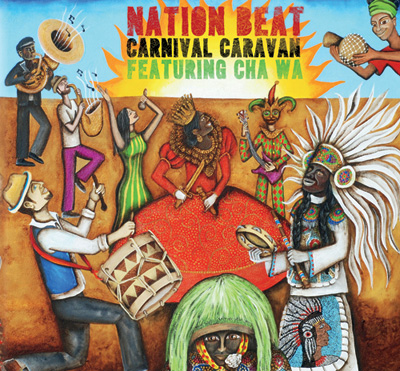