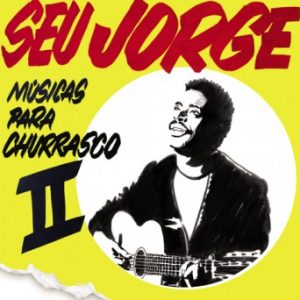 Seu Jorge is perhaps the most prominent Brazilian soul musician in the US. This is largely due to his major role in Wes Anderson’s film The Life Aquatic with Steve Zissou, where he played a melancholic man with a red hat and a guitar who belonged to the crew of Steve Zissou (played by Bill Murray), a quirky Jacques Cousteau-type. During the film Jorge’s acoustic Portuguese translations of David Bowie’s repertoire formed a large part of the soundtrack.

Yet, Musicas Para Churrasco (Vol. 2) is not melancholic in the slightest. Its name translates into English as “Music for Barbecues”. It’s the second of a trilogy about Brazilian life in the suburbs, and each song on it is extremely funky. Jorge seems to be committed more than anything else to seeing his audience get up and dance. They are, nonetheless, very nuanced.

Seu Jorge’s guitar is a highlight on this album, giving Jorge’s brand of soul a timbre that American soul does not have, even though it’s an album very much inspired by soul music from its golden age of the 1970s, when names like Stevie Wonder, Marvin Gaye, Al Green, Harold Melvin & the Blue Notes, the Temptations, Isaac Hayes and Gladys Knight graced both the charts and the era’s hearts.

Seu Jorge was born in a favela near Rio de Janeiro and it is where he first became famous, as a street singer. His vocals are spellbinding with a very ‘street’ or small cafe or restaurant feel. Singing always in Portuguese, many of Jorge’s lyrics are meant to be humorous. “Na Verdade Não Tá,” which translates to “The Truth is Not Okay” is about a girl who incessantly takes selfies. Knowing that he is laughing about day to day life in a way that we would ourselves in the US is refreshing. The song “Motoboy” begins with the sound of someone starting a motorbike. It’s a very notable song, like listening to a funky drive through a city full of inspiring feelings that the singer obviously loves.

The greatest thing about Seu Jorge’s album is that although has been heavily inspired by American soul, his guitar playing and his vocals really bring us a Brazilian’s perspective. In Seu Jorge’s music you can hear the influence of the favelas and his particular musical upbringing as well as a musical refinement, resulting in multi-layered songs. As with Mozart and the rest of the great names of European classical music, American soul music has made its way around the world and fuels artists in many countries. It makes it so sweet to hear an album that comes back to us in the US as a masterpiece inspired by our own music.

Músicas Para Churrasco, Vol. 2 is available from Amazon UK, Amazon US and iTunes