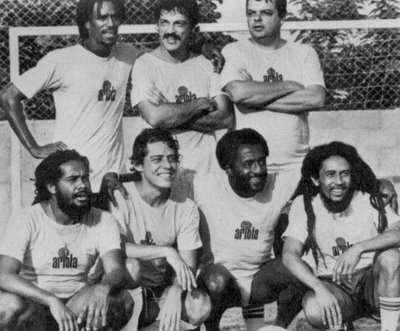 In 1980 Bob Marley visited Brazil in preparation for a world tour. The visit was merely a scouting mission for the tour that would be happening the following year. It was a visit that would see the worlds of reggae, Brazilian music and football collide. After taking a stop in Manaus Bob headed to Rio de Janeiro where his primary aim was to play football, and if you are a musician wanting to play football in Rio de Janeiro there is only one place to go: Chico Buarque‘s private football pitch.

The teams for the session at Chico Buarque’s place were:

These are some of the pictures from the event:

Paulo César Caju, who was a member of the great Brazil 1970 team would later say:

“… [That] game was actually short. Everything was quick, thank God, because the game was horrible. Bob was really bad. He simply couldn’t play. From 1 to 10 I would give him 1.5.”

Considering that Bob had always been regarded as a good footballer this seems surprising, but maybe highlights the fact that by this time he was already well into his fight against melanoma. Following the game he hung out at various parties in Rio, spending much time with Moraes Moreira (of Os Novos Baianos), who had this to say about Bob:

We played football, smoked some spliffs together and he even went to a show I played at the Morro da Urca, in Ariola’s Brazil release party. I sat beside him and we talked a lot. I couldn’t always understand what he was saying but Marina Lima [the singer] helped us communicate. For the little time we stayed together I realised that he was a very calm and suave figure. I have been listening to his albums until today and some time ago recorded a song in his memory called “Ver Bahia”.

The planned world tour failed to happen. Primarily because Jacob Miller, the lead singer for Inner Circle and with whom Marley planned to tour, was killed in a car accident in Kingston, Jamaica straight after returning from South America. Marley still performed plenty of concerts in 1980, in Europe and America, but eventually his health deteriorated and he died in 1981, his plane stopping in Miami to take him to hospital.