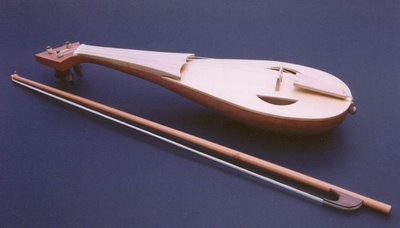 The Rebirth of the Rabeca Fiddle of Brazil

Deeply bound to the northeastern coastal cultures of Brazil is a stringed instrument known as the the rabeca. With the rise of Brazilian world music bands and pop groups in the 90s, the rabeca gained recognition and popularity as an instrument of Brazilian authenticity and tradition. However, up until then, it remained in the shadows of popular culture and music.

Unlike the violin, there are no universal norms of construction of the rabeca and different instruments may vary widely in size, shape, the number of strings, tuning and the materials employed. Although the violin is usually placed under the chin of the musician, the rabeca is more often supported on the chest or left shoulder in a manner similar to that used on some medieval instruments. Both the physical characteristics of the instrument and its mode of playing grant the rabequista (fiddle player) a diverse palette of timbres and sonorities quite distinct from those of the violin. While the bridge of the violin is curved to allow the sounding of one string at a time, the bridge of the rabeca is much flatter, allowing the player to sound on two or more strings at the same time. Origins and History of the Rabeca

The rabeca, otherwise known as rebec, rubeba, rebec, rabé and rabel has its origins in the Mediterranean where the Arab musical influence was strong. Unlike the lute, which was highly celebrated by the Iberian courts as well as Islamic singers and theoreticians, the rabeca was associated with street musicians and dancers, and frowned upon by the social elite.

Arriving on Brazilian soil with Portuguese settlers in the 16th century, the rabeca was long restricted from industrialised cities and remained in communities along the coast such as Cananéia (southern São Paulo state) and Pernambuco (northeastern state). The instrument played an intrinsic role in daily rituals and musical performances including the cavalo-marinho as well as other dances such as mamulengo, cantoria, terno di pifanos and in bailes de forró.

However, just like its status back on the Iberian Peninsula, the rabeca was still viewed by many from an elitist perspective – as a “peasant” instrument. Brazilian musicologist Mário de Andrade, an early pioneer of the nationalist and early folklore of Brazil, described the instrument as “how the people of Brazil call the violin. Its voice isn’t heard anymore among cultivated classes”. Along with Andrande’s view of indigenous instrumentation, prominent composers such as Villa-Lobos also reflected the same perspective. Although elements of traditional Brazilian music (such as rhythm, melody and structure) were seen as an effort to create a national musical idiom, musical instruments seem to bear the opposite effect and, in fact, were ignored.

Migration of the Rabeca and its Rise to Popularity.

The main catharsis in the popularity of indigenous instruments such as the rabeca emerged from the Mangue Bit movement of the early nineties in the city of Recife, north-east Brazil. Started by musician Chico Science, it was a reaction to the cultural and economical stagnation of the city. Along with his friends, Chico fused urban-based styles such as hip-hop, rock and dance with traditional rhythms of maracatu, coco, samba de roda and ciranda. With popular music groups such as Mestre Ambrósio and rabeca-virtuoso frontman Sergio Veloso (known as Siba), the instrument began to gain recognition as an instrument of versatility within Brazilian mainstream culture. Mestre Ambrósio came out of Recife in October 1992 with the concept of bringing northeastern dances, rhythms, and instruments – especially Pernambucan – up-to-date. By performing a repertoire of cocos, emboladas, maracatus, reisados and baiões on indigenous instruments, the collective embraced a broad spectrum of musical styles, while retaining a foundation firmly fixed in traditional values and sounds.

These days, the rabeca may be encountered in practically all parts of Brazil – from the fandangos of Paraná and the folias de reis of Minas Gerais to the music of the southern coasts of São Paulo and the marujada of coastal Pará. In each of these places, the rabeca possesses unique characteristics and repertoire, with the common theme being that of its integration in festivals and mainstream media. The rabeca fiddle can also be found in bands across the Atlantic in London.

One of the most exciting Afro-Brazilian bands in the UK is the Adriano Adewale Group. Presenting a fusion-style sound and consisting of Marcelo Andrade on the rabeca (as well as flute, saxophone), Adriano Adewale playing percussion and vocals, Kadialy Kouyate on kora  and Nathan Thomson performing on double bass and flute, they are well worth a listen!

Back to Brazil, here is a video of Mestre Salustiano (or Mestre Salú), one of the true masters of the Pernambuco style of rabeca playing:

You can find out more about the rabeca at http://www.rabeca.com.br/site/ (in Portuguese) as well as http://www.rabeca.org/index_en.htm (in English) where they have mapped out videos of great rabeca playing to where it can be found in Brazil – a very nice project.

To hear modern rabeca playing from Brazil you can do far worse than checking out the latest album from Maciel Salú called Mundo, a great album which brings a contemporary feel to traditional music from the north-east of Brazil.