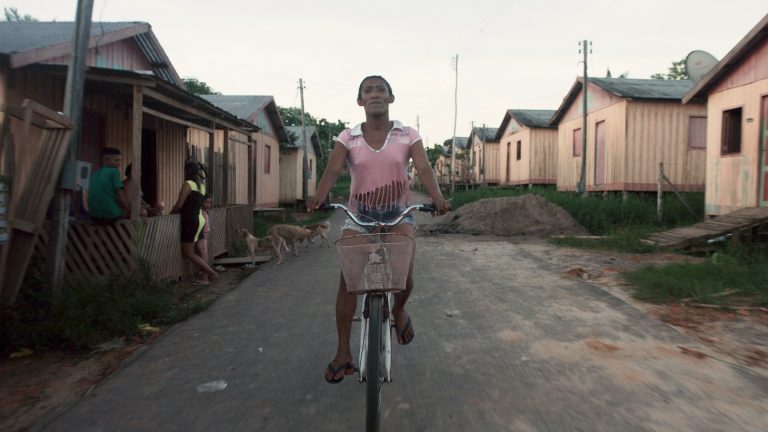 ‘Transamazonia’: The Courage To Be Yourself In The Heart of the Amazon Rainforest

Transamazonia (2020) is a Brazilian documentary about the lives of two trans people, Melissa and Marcelly, who both live in different parts of the Trans-Amazonian Highway.  The unfinished highway, which is still being built – and destroyed – according to the rainy seasons, serves as a powerful metaphor in the film and also highlights their reality.

Melissa Gabriela is a 21-year-old university student living in the city of Marabá, in the southeast of Pará. When she became pregnant, Melissa’s mother asked her if she was going to dress up as a man to raise her child. Melissa laughs when she tells her friends the story. In a very Brazilian way, she does not need to answer to let the audience know she did not bend to her mother’s advice.

Marcelly Roberts, the film’s other protagonist is 35 years old and, at the start of the documentary, is unemployed and living with her family in Lábrea, in the interior of Amazonas. The stories of Melissa and Marcelly are united by their location and struggles to live an authentic life.

The Trans-Amazonian Highway is Brazil’s third largest throughway, built during 1969-73 under the country’s military dictatorship to bring ‘development’ to the North of Brazil.

During that period, around four thousand men worked with the objective of clearing the forest to open roads and integrate the region with the rest of the country. But the Amazon rainforest is also a living being that, despite all the massacres it suffers, finds its own ways of regenerating itself every time it has the chance. As nature reigns supreme there, the highway is not fully paved, which makes walking through it quite difficult, especially in the rainy season.

In this scenario, built on the inexorable fight between human beings and nature, Transamazonia follows the daily life of Melissa and Marcelly. Delicately, it lays bare the difficulty of being different in a country where transgender people are part of scandalous statistics. According to the Murders and Violence Against Transvestites and Brazilian Transsexuals Dossier, published just two years before the film was released, in 2019 alone there were 124 murders of transgender people in Brazil. In the film, this grim reality is evoked by Renata Taylor, a member of ANTRA (National Association of Transvestites and Transsexuals) and the documentary’s co-director, along with Bea Morbach and Débora McDowell.

Transamazonia gives full voice to the participants, who are also seen filming the scenes. In the episode Marcelly reveals her mother and the colourful wooden house they live in, whose former blood red door had to be changed because the colour was not approved by the local pastor. Also striking is Melissa’s strong monologue that she rehearses in front of a shard of mirror in order to present that night at the local nightclub and in which she states: “Let go of your tongue. I am a raw woman.”

Theirs is a harsh reality but it also reveals the dignity of the life chosen by these protagonists, regardless of the hostile conditions they face in these far corners of the country. The intense presence of Melissa and Marcelly rise above the sad statistics. and embed themselves in the mind of the viewer.

In this sense, Transamazonia may seem simple at first but reveals itself to be very sophisticated, giving its audience the opportunity to weave their own opinions based on their perceptions. Despite the poverty the film shows in the northern parts of Brazil, there is also a wealth in these characters that refuse to hide who they are.

In contrast to the work of the military that forced open this wound in the Amazon rainforest – which does not close – the documentarians Débora MacDowell, Morbach, and trans activist Renata Taylor, give voice to the experiences of Melissa and Marcelly, and an opportunity to heal. It is not easy to be a woman of any kind in Brazil. But that is true in other parts of the world too, which is what makes Transamazonia universal.