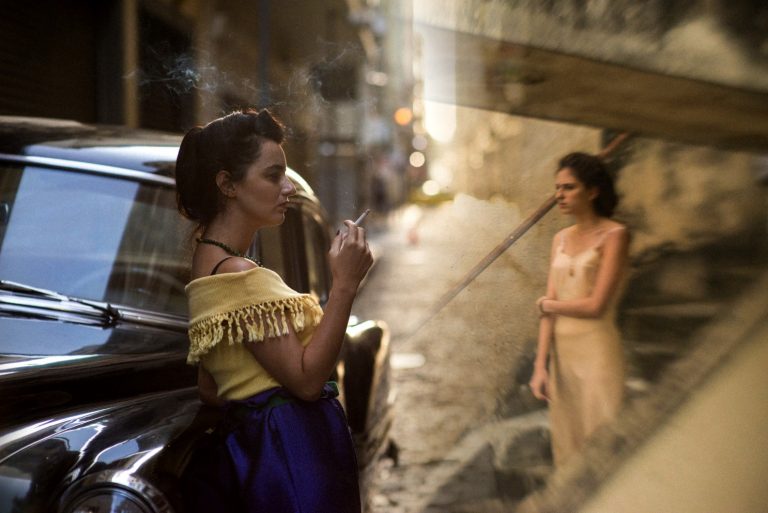 We Are Ambassadors of Film Abroad: An Interview with Karim Aïnouz

Invisible Life (titled A Vida Invisível in Portuguese, and originally titled The Invisible Life of Eurídice Gusmão at film festivals) is a spectacular film, and also astonishingly beautiful. Its charm radiates from every corner of Rio de Janeiro (in which the film is set), bouncing off its tropical landscape and its gorgeous women, most notably represented by lead protagonists Eurídice and Guida (played by Carole Duarte and Julia Stoker respectively). But just as the city is one of contradictions, with such a strong divide and segregation, the film is riddled with melancholy and suffering, with the director Karim Aïnouz playing on our heart-strings, like a guitar, at every turn.

Although he insists that a melancholic film was never on his agenda, his goal is to shed light on life in Rio de Janeiro in the 1950s. In Invisible Life, Aïnouz paints a portrait of two inseparable sisters who are living parallel lives, divided by lies, class and the spirit of time. In a period where a strong patriarchal system and conservative family values were rife, men in essence ruled the show and made decisions about the future of their daughter’s lives. Such as is the case with Eurídice and Guida’s father, who ignorantly tells a lie to keep the two sisters apart and shatters their future ambitions and innate sisterly bond.

Having won over viewers, and later the jury at the Cannes Film Festival, scooping up top prize in the Un Certain Regard section, we were intrigued to find out more about this fascinating film from its Brazilian-born director, Aïnouz. Indeed the win comes at a strange time in Brazilian cinema considering the uncertain climate of the Brazilian film industry under Bolsonaro’s rule. The film proves that despite all obstacles, there is hope for Brazilian film, as there remains hope for women living in Brazil today.

We spoke to Aïnouz over a video call in his hotel room in Mayfair, London. With a presence as captivating as the film, we found out what inspired him to tell this tale, his childhood memories and Brazil’s embarrassingly fragile political situation.

Invisible Life was particularly devoted to his his mother, who passed away in 2015, and when asked about this, he reflected on his memories of her: “I felt that she has a singular past, she helped me a lot, but I could see that there was a struggle there. Life was good but not easy. I wanted to show her friends and family how hard it was for her but I didn’t want to expose her too much”. After having read Maria Batalha’s book, The Invisible life of Eurídice Gusmão, from which the film is adapted, it seemed to do everything he wanted: the struggles with Guida and “there were a few other coincidences in the book, like the portrait of her sister, the portraits of women.”

Karim was born in Brazil, raised in Fortaleza, but lived all over. He has a Brazilian mother but Algerian father, with his father’s side having origins in France. When asked about his identity, he understandably stumbles. Although he’s largely Brazilian, he’s lived abroad throughout his life. After having lived in New York, he now calls Berlin home, where he’s lived for a century. He explains: “my identity goes back to when I did my first film, which was a portrait of my grandmother. Fortaleza back then was a small city. It was hard living together. I was raised in a household with no man, I had strong feelings of being born into a sort of peripheral space. I wasn’t at the cultural centre of the country. I didn’t have a Brazilian name. I didn’t have a father from there”. Perhaps it’s interesting then, given his mother’s heritage, that he decided on the setting of this film to be in Brazil. When he was asked about how he chooses his subjects, he mentions that “all the subjects I choose, I’m always trying to occupy a space that isn’t there, from the outside. I’m queer, so my films are all about belonging and being admitted to a community that has always pushed you out. Identity is not just about where you were born, but also about a lot of other factors”.

In the film it’s haunting how the two sister’s worlds never seem to come together, which appears also to be a constant theme in his work. “These are two women who live in Rio [a city he researched a great deal for his 2002 film Madame Satã], which has a trademark for being one of the most segregated places in the world – it’s a really divided city – with such a class divide where different women live in the city but their worlds never cross. I was interested in talking about class, but in not such a subtle way, there is no cross-over in Brazil between these different worlds”. It’s interesting that he mentions that the class divide is an aspect of the film that some Brazilian critics haven’t picked up, whilst international audiences have. He affirms that the concept of their parallel lives is about the peripheral and being pushed out – a feeling he can relate to from his childhood. He adds: “When I moved to France as a teenager, I was hugely affected by this and felt strongly about it”.

Originally trained as an architect, it was frustration that led him into film: “I worked a lot with architecture, but it takes a long time to create something, so I decided to merge into the visual arts. First I was making pictures. I went to small towns, and eventually got into film via the practice of performing arts. When he moved to the States and started living the US lifestyle, he cites this as a big inspiration. “New York was very open to people who had arrived and it was very political. I felt that film was a political tool to change and protect the world.” He enjoyed the process and fell into it organically. But it’s also worth mentioning that he is not only involved in cinema. He’s also a visual artist, a creative advisor and a lecturer. With other film-makers, he’s also been developing The Center for Audiovisual Narratives in partnership with Ceará state.

Perhaps the most uplifting aspect of Invisible Life is despite and against all odds, the women in the film, particularly the main protagonists are presented in a strong, favourable light as powerful women. Does the film act as a form of female empowerment? Aïnouz maintains that he wouldn’t say that the fact that men are placed in the background of the story is a form of female empowerment. “I wanted to unearth the history of the 1950s, to put my finger on something that I didn’t know yet. The choices they did and didn’t make were very big at the time. Therefore, I don’t know if it does act as a form of female empowerment. It exposes a ring of solidarity among women. In history, they helped each other. I wanted to show how things are today, but also looking back. It’s a form of resilience that is quite important to underline. It’s important to understand that they are full of struggles but also full of strength and dignity. It’s also important to shed light on the question of men having a different behaviour and stance towards women.”

Throughout the film, he tried to make the relationship between the sisters as real as possible, preventing them from seeing each other as much as possible off-screen during the filming process, in order to create this feeling of longing for one another. “I tried to create an experience of a very strong bond, and a memory of a lack. The goal was to have them miss each other, it was very important to do that. It touches on the Brazilian notion of “saudade” – I wanted to activate the feeling of missing each other.

The casting of Julia Stoker and Carol Duarte for the lead roles was an exhaustive process. He did 2,000 auditions, that were whittled down to 400. “When you write a role”, he tells us, “it’s important to confront it with reality. Eurídice has a sense of mystery about her. I looked for Guida after finding Eurídice, it had to be someone that would somehow make sense as a sister.” Aïnouz conducted thorough research of each of their personas, asking them to look at the camera in silence for a specific amount of minutes as a first exercise.

For some, the sex scenes portrayed in the film may seem daringly graphic, but for Karim, shooting sex scenes is like shooting any daily activity. “Shooting sex is like shooting people eating breakfast or people working.” For him, his sex scenes are not daring, or any different from anything else. He tells us that he conducted various interviews with people from different age ranges – to find out what their first relationship with the male body was in the 1950s. “I wanted to present it as a surprise, as a shocking surprise. I wanted to talk a lot about the 1950s. It’s a similar experience to when I saw the male body for the first time. It touches on the notion of consensual marital rape, during the honeymoon period of a marital relationship”.

At a time when Brazilian films are increasingly being censored by the government, we ask him what his win at Cannes means to him and how he feels about the diverse landscape of Brazilian cinema these days. “I feel joyful and proud. I started making films in 1992. After the closing down of the distribution of film [Embrafilme, the government’s funding arm for cinema, closed in 1989], the Brazilian film industry has been constantly building since”. As humble as ever, he proclaims that it’s been an exceptional year for Brazil, where other Brazilians have been winning prizes. “Ironically, we are acting as ambassadors of film abroad”. Referring to Bolsonaro, he strongly holds that the current government is the most embarrassing and violent government yet. “We have been violated. It’s threatening the support for cultural events, melting and destroying the country. Foreign language films are acting as ambassadors for a melting country, a country that is burning and selling land to foreigners for no money. I hope this attack that we are suffering will not last. We need to invert perception, the more outspoken we are the better.”

Invisible Life is available on MUBI