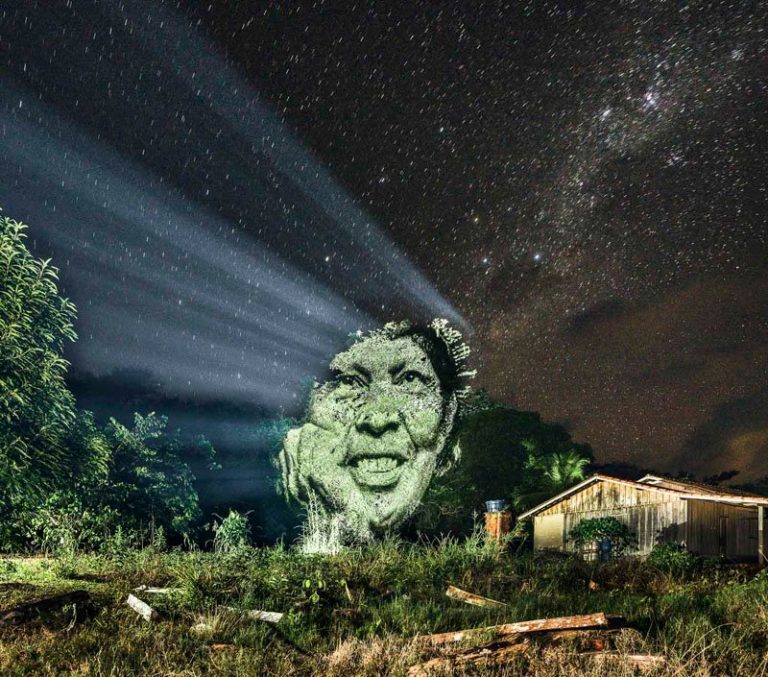 ‘When You Cut a Tree, It’s Like Putting Down a Man’: This French Artist is Projecting Brazil’s Deforestation Dilemma

Brazil’s Amazon Rainforest is burning at a record rate. In 2019 an unprecedented amount of forest fires have struck the rainforest, with 60% of the fires being in Brazil, as claimed by government figures. According to many environmentalists – see this post by the World Wild Fund for Nature – logging and cattle-farming are the chief reasons for this. Not only does the Amazon play a large role in carbon storage and global climate, it is also home to unique wildlife, ecosystems and indigenous communities, who by preserving their culture and close relationship with nature, fight for the conservation of the forest as industrial farming continues to boom. Given these factors, the forest fires continue to spark an “environmental emergency” with Brazilian president Jair Bolsonaro’s right-wing policies contributing to the melting of the country. Bolsonaro has increasingly insisted that he is skeptical about climate change and believes Brazil’s Amazon should be open to business interests to allow mining, agricultural and logging companies to exploit its natural resources.

A recent documentary by the BBC called Meat – A Threat To Our Planet? (no question mark required) has elucidated the problem of cattle-rearing, and its position as a main driver of deforestation in the Amazon. According to the programme, land was cleared at the rate of five football pitches a minute last summer, with Bolsonaro condoning the lucrative practice, backing the so called “beef caucus”.

Brazil is the largest exporter of beef in the world, with nearly 50% of Brazilian livestock raised in fields that used to be rainforest. With the global demand for beef increasing, Brazilian farmers have set fires in the rainforest to clear space for pastures over the past 60 years, with the situation skyrocketing in 2019 with 80% more fires than in 2018.

Not only are the fires posing a great threat to the Amazonian wildlife, they are also posing an increasing threat to endangered tribes whose lands are being burnt to feed our increasing appetite for meat. And for many of Brazil’s surviving indigenous tribes, the rainforest is home. Experts and campaigners blame the scale of this year’s blaze on the green light they believe Bolsonaro has given to those who wish to destroy the rainforest – where since his election last year, he has been delivering on his campaign promise to alleviate environmental laws, which in his eyes, are preventing the country’s economic development.

In his most potent piece of work to date, French “Activist Artist” Philippe Echaroux has taken the issue into his own hands, providing a visual image of the damaging effects of the ‘green light’ Bolsonaro has given by projecting the problem of deforestation onto the Amazon rainforest and using this as his canvas. His mission is to draw international awareness to the greed-fuelled, consumerist culture that is causing the fires, to shed light on the victims of deforestation and the miners and farmers who don’t hesitate to violate their territory.

The challenge here is to take personal responsibility for the rainforest’s destruction and to hold ourselves accountable for the severity of the situation, which is being played down by Bolsonaro. This is a president who “won the election with his anti-environment, anti-human rights and anti-indigenous discourse and in taking office, he has transformed these words into deeds”, expressed Brazil’s former environment minister, Marina Silva.

Echaroux is a prime example of someone who has taken personal responsibility for the fires, embarking on a project that acted as a response to a plea from the Surui’s tribe chief Almir Surui Narayamoga, who asked that his people’s plight be highlighted. By illustrating the faces of the people directly impacted by the illegal logging practices, largely condoned by Brazil’s president, Echaroux provides a humanizing aspect to the problem. His message? “When you cut a tree, it’s like putting down a man”.

If that doesn’t make you more conscious about your environmental and ecological choices, and acknowledge that we are all, to some extent, to be held accountable for the murder of tribe members for our own benefit and profits, I don’t know what will.

Find out more about the Amazonia project via Philippe’s Facebook and website and watch the making of below: