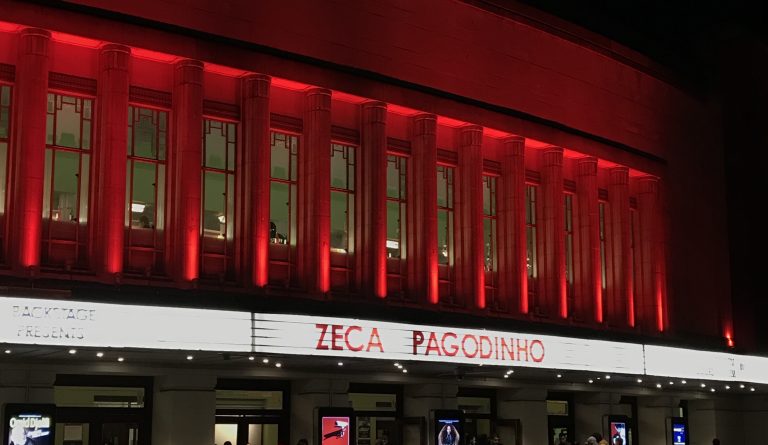 Zeca Pagodinho took to Hammersmith Apollo’s stage on the 29th November in London to celebrate 100 years of samba. If you followed the night on Sounds and Colours’ Instagram account you’ll know just how energetic the whole night was!

Being Brazilian, my appreciation for pagode and samba is something inherited. I remember being very young and my mother playing Zeca Pagodinho CDs on a massive black stereo in her bedroom, dancing and singing along; to witness those songs live after so many years and after living in England for such a long time, definitely caused a huge wave of nostalgia to wash over me. The event also united so many Brazilians into one single place that I felt as if I was back in Brazil instead of West London.

All those attending were up on their feet dancing the night away, including my British friend who also made full use of the atmosphere to learn some samba! There was a couple talking to each other in the lobby of the venue, discussing if they should go to the bar and have a drink, the lady then proceeded to say that it is a sin to watch Zeca live without a beer in hand. Following her advice – more so an overheard conversation – I also proceeded to grab myself a beer; when Zeca entered the stage he had a stool and a small table ready for him to place his own drinks and any gifts the people in the crowd handed to him.

First, he got handed an English flag that received a round of applause, then a Brazilian flag that allowed for screams and every other possible noise a person can make in a music venue that almost drowned out the music – that’s exactly how one should show pride in one’s culture. A kind gentleman also handed him a pint of beer, which he kindly accepted and sipped on it throughout the remaining songs.

The crowd was very different to music events I tend to go to, with adults making up most of the crowd, but that doesn’t mean Zeca did not encounter over-excited fans. A man climbed onto the stage attempting to hug Zeca and blowing kisses at him briefly before being dragged off stage by security – so much for teenagers’ stereotype for being fangirls and fanboys!

Just as anyone in that room, I love the country I live in now and call home, but also miss where I’m from and revel in anything that can transport myself there. Zeca Pagodinho coming to London gave Brazilians that opportunity and Brits a chance to see a legend of Brazil’s popular music work his magic.