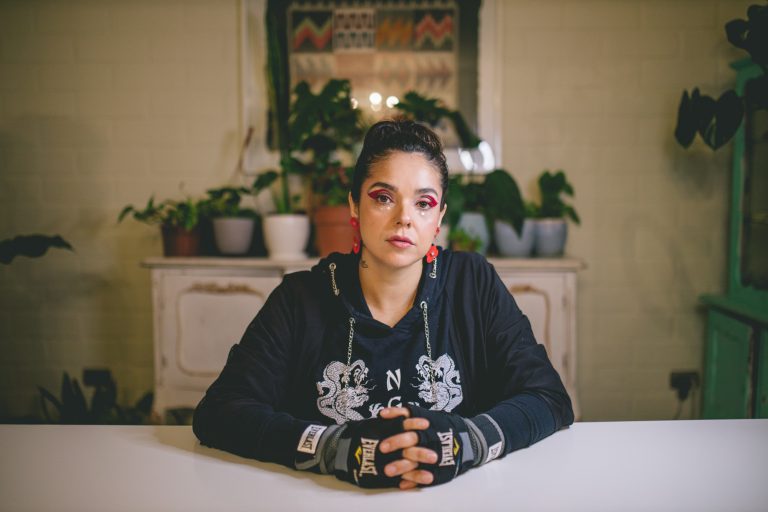 Feminist pain and anger are repurposed in the new track “Arde” from Chilean artist Catártica Animal. “Arde” (Burn) is a feminist anthem which questions, ignites, declares and rebuilds. The lyrics starkly advocate the urgency for women to set fire to the patriarchal system and write our own story.

The actress, singer and composer María Paz Artiga, who’s from Melipilla – a small city between Santiago and the coastal San Antonio – has been making what she describes as “uterine” electro cumbia under the moniker Catártica Animal (Cathartic Animal) since 2018.

With two EPs in the bag, Soltar from 2018 and Canciones Para el Desvelo in 2019, plus singles like the poppy-dembow “Ay Corazón” and more bass-heavy “Brujas” which borrows lyrics from “Un violador en tu camino” in its bridge, “Arde” features a more detailed electronica-pop production, finer vocal exploration and incendiary lyrics, which together reflect a personal, and collective, evolution.

In this powerful upbeat anthem regional and contemporary sounds swell with the pain of stories that have recently shocked public opinion in Chile.

“I think one of the first things which motivated me to write this song was reading a news story about the rise in calls denouncing domestic violence during the pandemic”, the artist explains. “This mixture of pain and anger makes you reflect pretty deeply about the root of such violence. The verses and the chorus came from this jumble of emotions.”

You can hear it in Catártica Animal’s voice on “Arde”, as she invites her listeners to burn with rage beside her; for women to take charge and carve our own story. The track pulses with the frustration of living under a patriarchal system and the outrage many in Chile felt in relation to the tragic public cases of women and girls like Ambar and Antonia.

After being missing for eight days in August 2020, 16-year-old Ámbar Cornejo was found dead in the home of her killer, her mother’s boyfriend, Hugo Bustamante. Bustamante had been released early from prison where he was serving time for the gruesome murder of his ex-partner and her nine-year-old son in 2005. He hadn’t yet served half of his sentence.

The judge on 20-year-old Antonia Barra’s case, despite confirming that she had been raped, ordered a house arrest for her rapist, rather than preventive detention, as there was allegedly not enough evidence against the accused. An incriminating video was already in circulation at this point, and at least four cases of sexual abuse had been filed against Martín Praderas, one of which involved a minor. A month after the rape in October 2019, Antonia committed suicide, causing public outcry.

In reaction to the judge’s failure to investigate and to protect others like Antonia, Chileans protested outside Martín Praderas’ house, performed “A Rapist in Your Path” by Las Tesis and staged vocal protests and loud cacerolazos around the country.

“Because of the neglect we feel from a judicial system that doesn’t protect us or put any effective measures in place to confront the violence, we’ve come up with our own ways to defend our rights. Going out into the streets en masse for the women and girls who’ve been murdered also creates a feeling of hope,” María attests. “‘Arde’ symbolises that if the world doesn’t change, we’ll change it ourselves.”