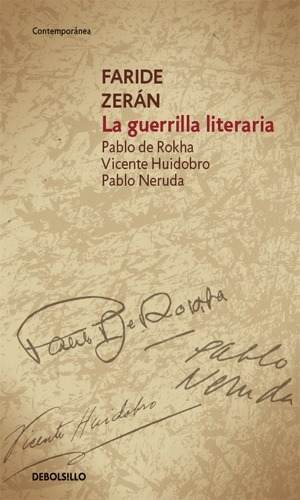 La Guerilla Literaria begins on the streets of Geneva in 1992, a couple of years after the fall of the Pinochet dictatorship. Pepe de Rokha, exiled grandson of the volatile Chilean vanguard poet Pablo de Rokha, meets a fellow exile on a busy street. Don’t we know each other? de Rokha says. No, says the latter. I belong to the enemy camp. Ah, so you’re a Pinochista, says de Rokha. No, the fellow exile says. I’m a Nerudiano.

Thus begins journalist Faride Zerán’s history of one of the more interesting (and least known internationally) wars in a century dominated by wars: fought in prose and verse, not bombs and guns.

It’s been said often enough down in Chile: this “Hallway Country”, as Roberto Bolaño put it, has room enough for poets. Two have won the Nobel Prize in Literature, three the Cervantes. Before the boom period of Magical Realism and the post-modern acclaim of Bolaño, however, the 1930s could be considered a Golden Age for Chilean literature. Three heavyweights, one of which would never reach over the spine of the Andes and find fame abroad, dominated the scene. Their styles, though at times overlapping, were distinctive. Two belonged to the Communist Party. One did, then was ostracized from it. Two developed along a romantic tradition. One eschewed it completely. Two lived in relative wealth, their literary output sold at home and abroad. One rode the countryside town to town on horseback, distributing his work to farmers and fisherman and wanderers.

That “one”, in Zerán’s charismatic and heavily anecdotal retelling of the Guerilla Literaria, is the driving force behind a feud that survived a World War and a two-decade dictatorship, and well after its protagonists had found the grave (for only one of which mourners lined the streets in mass to see the coffin pass). His name was Pablo de Rokha, to his friends, the “amigo piedra”.

De Rokha was a massive, imposing presence, known both for his temper and his conviviality, often displayed simultaneously. Once, a fattened pig strayed from a neighbour’s farm onto his own property outside of Santiago; angered that his neighbour had been careless enough to let his livestock sniff around other people’s property, he decided to kill the pig there, throw a party (with the roasted trespasser placed at the centre of the table) and, when the neighbour finally came by to enquire whether or not de Rokha and company had seen a wandering sow, fed the unsuspecting man what he was looking for along with a few glasses of his home-made wine. The neighbour, of course, forgot about his pig completely.

When it came to writing about both Vicente Huidobro (the third belligerent in this battle) and Neruda, however, he was not so kind.

Zerán is careful in the book not to explicitly imply something that, upon first glance, seems obvious: de Rokha was jealous. Huidobro, the godfather of the creacionismo movement, hailed from an old aristocratic Chilean family. He talked their talk, walked their walk, and dressed their dress — of the few included in the book, there is a picture of a 19 year-old Huidobro, dapper, shoe-shined, the definition of bourgeois elegance leaning against a grand piano. De Rokha believed him to be imperious and snobby, a poet of the elite instead of the people, and both rich and successful in his time.

Neruda, on the other hand, hailed from a tiny, one-road town cut out of southern Temuco forest. He came to Santiago as a teenager, ten years de Rokha’s junior, to live the poet-bohemian life. He met de Rokha and the two actually became friends, if not falling into the roles of mentor-mentee. In fact, Neruda’s Twenty Love Poems and a Song of Despair was written for de Rokha’s niece, a beautiful Venus for which Neruda was smitten, but ultimately forbidden to have by the latter’s family. Twenty Love Poems, which de Rokha would take great pains over the years to deride as “fashionable”, launched Neruda to international fame, diplomatic missions in Burma, France, Spain and to eventual literary immortality. De Rokha hated the work.

It was only de Rokha himself, as the poet of the pueblo and unwavering champion of the vanguard, that was left to live the blue-collar poet’s life, self-publishing and grinding out poetry that played with language, modern life, the quotidian of the labourer. It wasn’t until he was in his 60s, not many years before he would take his own life with a single bullet to the head (a fate his son would also self-inflict, leaving his father to bury him), that he won the National Literature Prize. By then a relatively old man with a relatively weakened inner fire, his response is not so much that of jealousy (maybe this was never the case) but melancholy. His life work had finally been recognized, but by then the point seemed to have been missed completely. Upon the announcement he stood up at a party given in his honour at his house in Barrio Brasil, the attendees drunk on his booze, caterwauling from his windows into the quiet avenue below, and bellowed to no one in particular: “I wanted to win this prize when my wife was still alive… it’s come late, it finds me old and alone.”

The most celebrated writers, like the most celebrated of all cultural icons, are nearly always carved into dualities in the popular imagination, recognition of the divinity almost presupposes a forgiveness for the humanity. All three of these poets certainly suffered from human inclinations. Huidobro’s insatiable attraction for a sixteen year-old beauty while he sat in the Pantheon of Latin American poets in his early forties led him to kidnap her from her family and take her to Europe, shooting the tires out from the car her father had hired to take her back. De Rokha was overbearing and vengeful, even claiming once to a friend that he wouldn’t mind murdering Neruda if he saw him in the street. And Neruda himself was not one for letting the proprieties of married life get in the way of his lusts for the fairer sex. In the end, the work endures while the fallibilities become fodder for interesting gossip and entertaining books. This is perhaps the nature of societies fed on icons. What is interesting about Guerilla Literaria is the extent to which these three poets went to weave their work into the conflict, or the extent to which they avoided such a combination.

Again, here de Rokha takes the fore. “The diatribe is the desperate verbal expression of the class struggle,” he wrote, and it is in the diatribe that de Rokha put his considerable energies. Over a series of months in 1935 in the periodical La Opinión, he took the fight to both Huidobro and Neruda. Yet it was for the latter that he displayed the most virulent polemic. Besides the short-lived scandal (egged on by Rokhianos) that Neruda had plagiarized from Rabindranath Tagore in Twenty Love Poems, De Rokha was sharp-tongued and vicious in general with his former friend:

Neruda was not sucked in, officially. He was already gaining international renown, a diplomat for the Chilean government living abroad, far from the pageant Huidobro and de Rokha played out in the country’s periodicals. He denied the plagiarism in no uncertain terms from his consulship in Spain while he penned verses for the Republicans, publishing Spain in My Heart in 1938, then losing his consulship. However, that same year appeared the poem “Aquí Estoy (Here I Am)”, a vicious work of verse that Neruda biographers normally never attribute to the poet, according to Zerán. It was only through his Spanish friends that the poem saw the light of day in Paris. It is a brutal, whimsical response:

“…Bastards
sons of bitches.
My testicles are full of petals,
my hair is full of birds
I have poetry and steam
cementaries and houses…
I shit on the bitches that misbirthed you.
Derrokas…”

Could he have thought that they would tarnish his international reputation if he published his own diatribe under his name? Or did he feel that he was above engaging (in public) what he surely considered a bitter rival who had tried, unsuccessfully, to wrench him down from his literary pedestal?

Huidobro, for his part, ventured into the fray in the same periodical for which de Rokha wrote, penning stately and condescending responses to de Rokha’s claims, in which he called Huidobro the “little-great bourgeois megalomaniac”.

“You have never achieved a balance between the thinking and what is thought, Huidobro responded, nor between expression and what is expressed…it is a tragedy.”

These back and forths became a sensation in Santiago, where readers of the two poets’ respective magazines gobbled up the weekly issues. Sales soared, and the editors of both encouraged the battle’s continuation. All while all three poets continued to publish their own work, far from the literary circus of the Guerilla. In the case of the Huidobro-de Rokha feud, the spark was the publication by two of Huidobro’s ardent followers, of an anthology of Chilean poetry. Among the names both Huidobro’s and de Rokha’s appeared. However, the former’s work took up nearly 2/3 of the total, the latter’s, significantly less. There was also the matter of de Rokha’s wife, Winnette, another poet of great importance (at least according to de Rokha himself) who was not included at all in the anthology.

Huidobro would be dead by 1948, de Rokha by 1963 and Neruda followed a few years later, two weeks after the presidential palace was bombed and the democratically elected president of Chile killed in a coup d’ etat. However, the Guerilla reached beyond the grave: from denial of the de Rokha clan into the Communist Party of Chile (said to have been engineered as a soft but well-struck blow from Neruda) to that meeting on the streets of Geneva, just as the country had finally overcome one of the most brutal dictatorships Latin America saw in that century.

The Guerilla Literaria is, today, one more footnote in the heady cultural menagerie of the 20th century. There have been other literary feuds, of course; the spat between Hemingway and Faulkner, and in Latin America between García Marquez and Mario Vargas LLosa. The former dealt with more literary blows; the latter more concrete (to the eye of García Marquez, to be exact). But there have been few in the last 100 years that reached the consistently contentious heights of the Guerilla Literaria, and which have been so little known. It is therefore a pleasure and an important piece of cultural study Zerán conducted on the lives of these poets, whose work does indeed stand, and whose reputations, it must be said, definitely do precede them.