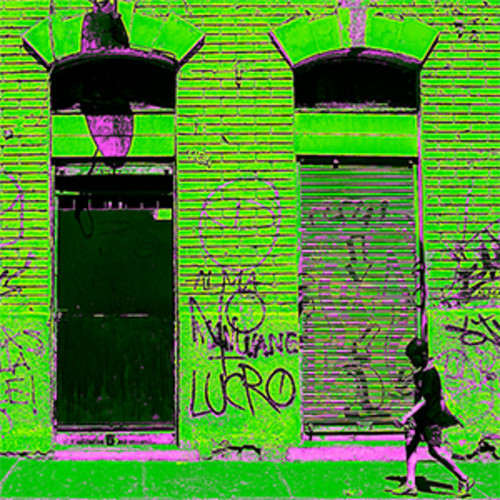 “Esto debe ser una broma,” the opening track of La Medicina’s new record, Hipócritas, should have been the title of the album. If when listening to it, you find yourself thinking, “Is this a joke?” rest assured: I thought so too. I am not one to be unable to find something to connect with on a record. Be it the textures of the sounds, the artwork, the flow of the songs—I believe every record has something that people can like or relate to. I had a really hard time making that case for Hipócritas. And I tried. After more than 10 listens, the only conclusion I can make is that I found it a hard piece of work to connect to. Hipócritas oscillates between predictable and just plain repetitive (and frankly annoying) that it’s hard to even find its soul song — that one song that encapsulates the record. Usually, even with musicians I may not like, I can pick out a song to play for people under the banner of “If you like this song, you will probably like this record.” In the case of Hipócritas, the song that best encapsulates it is maybe “Dark Washiturro,” the eighth track on the record. But even that is hard to say, because the album goes from being EDMish (?) to more bass-y (?) to nostalgic rock (?) and lacks a cohesive narrative or a voice.

La Medicina, a side project from La Reina Morsa’s Pablo Gálvez does have one saving grace on their new Hipócritas. But it takes a while to get there. We start with an opening song with a steady, heartfelt beat that puts the drum in drum and bass. But then the track gets predictable and antiquated quick, breaking into a 90s-era rock anthem that sounds even worse than Letters to Cleo. It’s very forgettable, and the song feels strained, trying to climax and falling short.

The second track, “La Obra,” is fine and a little schizophrenic. At times playing with Casio notes echoing Nintendo nostalgia, at times blending in attempts at Massive Attack riffs, the song never takes off, and despite being just 3:38, seems endless. The lyrics are hard to listen to: it makes the horribly simplistic mistake of rhyming “Marte” with “martes.” The exact line is “Recordar que recién es martes. Alguien me está esperando en Marte” — loosely, it means “remember that it’s just Tuesday and someone’s waiting for me in Mars. But in Spanish, Mars (Marte) and Tuesday (martes) differentiate by one letter. This lyric was the cause of continuous eye rolls. The song continues to make predictable rhymes like “molestarte” with “callarte”. Not to say that all bands need lyrical gymnastics in order to be sublime. Colombian legend Aterciopelados often have simple rhymes, but their musicality, harmony and overall commitment to the basics of pop make the rhyme seem intentional rather than hasty.

There was no worse offender to rhyme’s reason than the song “Te Crece La Nariz Por Mentiroso.” It’s cringeworthy. “Flaca” with “caca” with “sudaca” — just plain lazy. What’s worse — it’s a song with hip hop influences and tones that lacks the cojones and verbal prowess of greats like Calle 13’s Rene Perez Joglar, a man that can make any vulgar lyric poetic. If there is a silver lining to this, it’s definitely “Dark Washiturro,” the song that is the most definitive in voice and in rhythm. With its bass echoing a nod to 90s hip-hop and a smooth lounge sound at the same time, this track is enjoyable. But one out of 10 is a pretty low batting average.