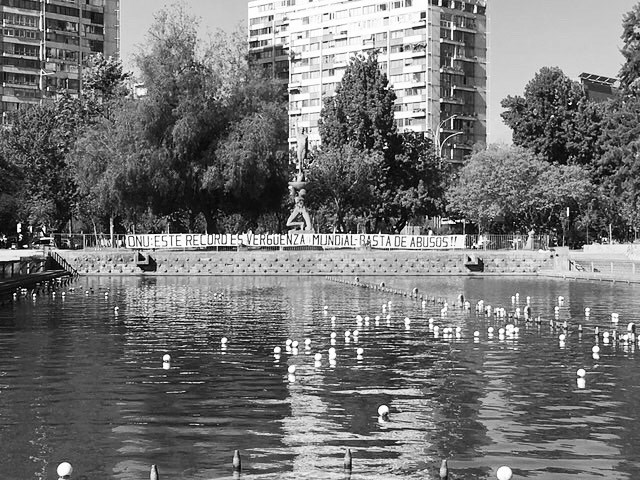 Created during the wave of protests against political corruption and a failing economic system in Chile, Ojo Chile is an audiovisual collective energising citizens and campaigning against human rights violations in the country. With influential film-makers and changemakers onboard, Ojo Chile produce informative, emotive, high-quality video content about what’s really happening in Chile. S&C spoke with the mysterious collective about their work and the movement.

What is Ojo Chile and how did it come about?

Ojo Chile is an audiovisual community that came to life during the first days of the recent social unrest in Chile.

It began as a WhatsApp group where we shared images, archives and records of what we were experiencing, motivated by everything happening in real time, and trying to find a way to support the movement in our own field. We’re conscious that these images are contemporary history and have symbolic capital that needs to be managed. However, it soon became necessary for us to meet up and arrange solid action against the information embargo our media is imposing, on an international as well as a national level, and to counter the terror campaigns.

This is where the first hashtag came from, #OjoChile and with it the social media presence. We put out a call inviting people to participate, making videos under the motto #ChileDespertó (Chile has awoken) and #YoTambiénDesperté (I also woke up). In fact, these are the first videos you can see on our social media channels, people giving testimonies of how they experienced this national awakening.

The title #OjoChile alludes to the agonising loss of sight that’s claimed over 200 victims so far [in this period of social unrest] and to the expression “¡Ojo!”, or “Watch out!”.

We create and share content and actions people are taking, both inside and outside of Chile, which visibilise and support the many social demands being made by Chilean citizens in this movement. Our content denounces abuse, injustice and crime and challenges the State’s impunity.

Who is part of this collective? Do we know any of the collaborators?

We’re an open community, connected by our work in film and culture. We are film-makers, producers, editors, animators, publicists, journalists, cultural managers, to name a few. We are both emerging and established artists from Santiago and the regions. We like to keep the mystery about who’s behind Ojo Chile, placing importance on the content rather than its creators. We constantly switch up who’s leading the project, and our anonymity is also a matter of security.

We are a multidisciplinary group who pull together our skills for the service of social needs and for the visibility of human rights violations that are distressingly multiplying day by day.

Is it important for your work to be seen in other parts of the world?

It’s fundamental that our work is broadcast internationally. This is one of the reasons we came into existence – to use our skills to challenge the blockade on information; to share what was really going on in our demonstrations and rallies; to collect testimonies of the human rights abuses taking place; and to generate content that retained the spirit our social demands. Of course traditional media have omitted this or twisted it to suit their discourse.

We also see this not only as a local issue, it began with the imposition of an undignified and unsustainable social model and it has a lot to do with the environmental crisis. A number of countries are waking up to this common issue.

When our collaborators exhibit work, participate in film festivals, and take part in street demonstrations abroad, we build direct relationships with artists around the world in countries going through a similar situation. We’re really interested in sharing and deepening these connections.

How can your audiovisual material support collective resistance?

Through our work, we support the cause by exposing what the government shrouds and distracts us from. The media have turned their whole focus to ‘delinquency’ to try and criminalise the movement, neglecting all those who are suffering State violence. There have been over 20 deaths, more than 232 eye injuries, and more than 2,800 people wounded as of yet.

We then provide action – in response to social demands and the new Constitutional process, with the objective of informing and reflecting through our videos so that citizens can confront these challenges in the best possible way.

With this in mind, we’ve also created audiovisual councils where we debate the key points of our Magna Carta. This is also how we’ve connected with events in other ends of the country.

What kind of message do you want to generate in regard to Piñera’s government and the protests for a new Constitution?

At Ojo Chile we have diverse perspectives and opinions, so we focus on our points in common. As a collective, we also understand that in a constructive framework, there’ll be parts we have differing views on, but this gives us more angles from which to look at an issue. The important thing is that each argument is put forward. Our views intersect where it comes to human rights demanding justice for all the victims in this process – of which the numbers are growing day by day.

The State must take responsibility for these victims, and all of those who haven’t complied with protocol, who have violated human rights during this period, must be prosecuted. This is where the eye injuries come in. These cases of ocular injury directly concern us as people who work with moving image, which is why it’s inspired the name of our collective.

We need a new constitution, one that’s legitimate and democratic [the current Constitution was undemocratically imposed during Pinochet’s dictatorship]. The path towards a new constitution has opened up and it’s our responsibility to continue in this line of action, and ensure that it’s a representative process. We believe the new constitution should be written by the public, through a Constituent Assembly. A major shift in our socioeconomic model will ensure equality and dignity.

The State also needs to respond to the social demands being expressed in the marches – there’s been no response as of yet. We’re stirred more and more each day by this political farce, the way they provoke us and their unprecedented announcements. We’re trying to look beyond this predicament and towards topics of a bigger scope, but we often have to focus on this unacceptable situation.

In the future, how would you like Chile to be seen internationally in film and video?

This question will be personal to each film-maker. The period we’re going through right now has shaken everyone and caused shockwaves. It’s probably going to be difficult to avoid it in our future work, but it may not always be an intentional focus. Time will tell.

Does the power of art have limits when it comes to politics?

These are the kinds of questions we’re asking ourselves. We understand that we’re all in some way political players. Even so, for many people, what we do breaks personal paradigms in terms of creation – for some we’re more about communication than art, for others it’s more profound. The question is open to debate, but that doesn’t mean we’re going to stop.

How can we follow Ojo Chile and support the artists involved?

You can get the latest from Ojo Chile on social media: we are @ojochile on Instagram, OjoChile on Facebook, Twitter and YouTube. Mainly you can support us by sharing our content. We are also open open to anyone who’d like to collaborate with us. You can get in touch by email on [email protected]