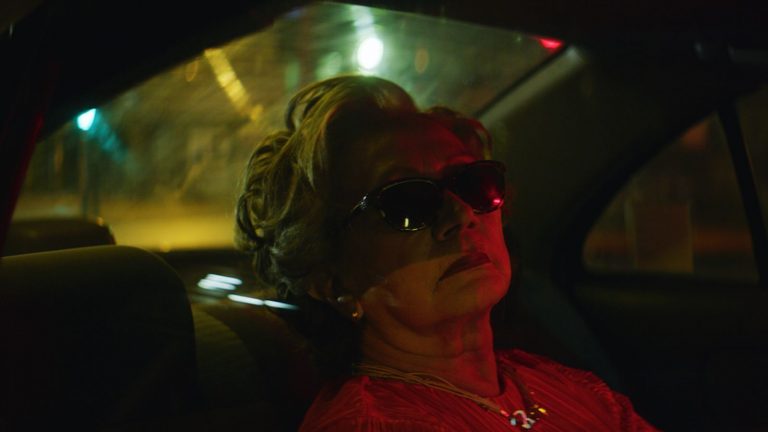 Nona. If They Soak Me, I’ll Burn Them

Nona. If They Soak Me, I’ll Burn Them is a curious mix of personal memoir, dark humour and Pinochet-era inflicted trauma. The third offering from Chilean film-maker Camila Jose Donoso, stars her own grandmother, Josefina Ramirez, playing the lead role – an alternate version of herself, or the ‘Nona’ of the film’s title. Nona is an intriguing character from the opening credits, during which she teaches us how to make a Molotov cocktail; she’s certainly glamorous with her coiffured hairdo, sunglasses and poised appearance this Nona could almost be an older version of Pauline Garcia’s ‘Gloria’. This is another femme fatale who has suffered at the hands of Pinochet and has lived to tell the tale.

What is there to know about Nona, who we learn is forced to leave her rather plush home in a suburb of Santiago for reasons that we are never truly sure of? Well, she loves to dance, she loves to have a good time and she certainly loves a cigarette. Not to mention her love of fire, which we learn about during the course of the film – tyre-burning escapades, during the dictatorship, during which she lit piles of old rubber purely to see what would happen when the police finally arrived. However, it’s tricky for one as a viewer to truly connect with Nona, you always feel slightly distanced and behind the lens – as best portrayed through Donoso’s clever blend of home video footage and abstract shots; her own mundane daily life, and recovery from the operation on her cataracts, now captured on home video.

Following her departure from Santiago, Nona holes up in the coastal backwater of Pichilemu, in a house built on a plot bought during the Allende era. Frequent calls to her daughter for hair dye and a love of gardening are a sporadic contrast with the local wildfires that cause tense relations with her new neighbours. Free spirited and with a cigarette permanently dangling from her lips, you do end up warming to Nona, even if this film struggles to transform the mundane into memorable. She’s a character whose pyromaniac tendencies and pure grit are both endearing and a fearless portrayal of a woman who is trying to forget the past through a love of pyromania.

Nona. If They Soak Me, I’ll Burn Them is available on MUBI until 1st May (get a 90-day free trial to MUBI with Sounds and Colours)