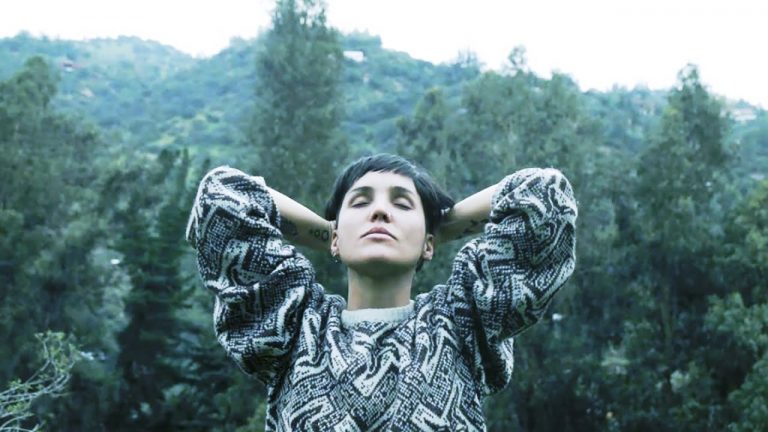 Rubio is the solo project of Fran Straube, who’s set to release her debut album later this month. She has already played a host of sell out shows in her home city Santiago this year, and took her atmospheric electro music outside Chile over the summer, performing in the USA and Europe, including slots at Primavera Sound and Seattle’s iconic KEXP.

Although Rubio has only spent roughly a year as a fully-fledged project, Straube has been a main player on the Chilean music scene for years, known as the lead singer and drummer of the band Miss Garrison, who are currently taking a formal break.

“I was with Miss Garrison for years, I had a life living with them, they are my family. Rubio is a new project with new energy”, she says. With Miss Garrison commitments gradually slowing, Straube has been able to throw herself into Rubio, resulting in a fast and seemingly unstoppable rise.

The recent international tour is another significant step in her journey, “Primavera and KEXP have always been a dream. I never thought I could go with Rubio, being such a new project.”

Straube is very much at the forefront of the experimental Chilean underground scene, pushing closer to more mainstream and international territory, one of the few break-out artists of the Latin American circuit, “There are great bands here, but they can’t travel easily. Festivals will invite us to play—but they won’t pay our flights. It’s just a huge investment.”

“I do feel a responsibility to represent Chile while I am abroad. I am honoured and very happy to do so,” she reflects. “I feel prepared. I’ve been making music a long time, it’s been a lot of work and love.”

Although content with Rubio’s rise, Straube enjoys playing smaller shows and more intimate gigs. Straight after the USA tour, she played a welcome home show in Bar de Rene, a popular Santiago dive bar with a penchant for hard rock. “I have always liked playing smaller places—I started with Rubio as a way to keep doing that, as Miss Garrison was growing so fast and the band didn’t really want to play in small venues. I like playing live, playing Primavera Sound is really great, but so is playing in Bar de Rene, which is really accessible, and very Chilean.”