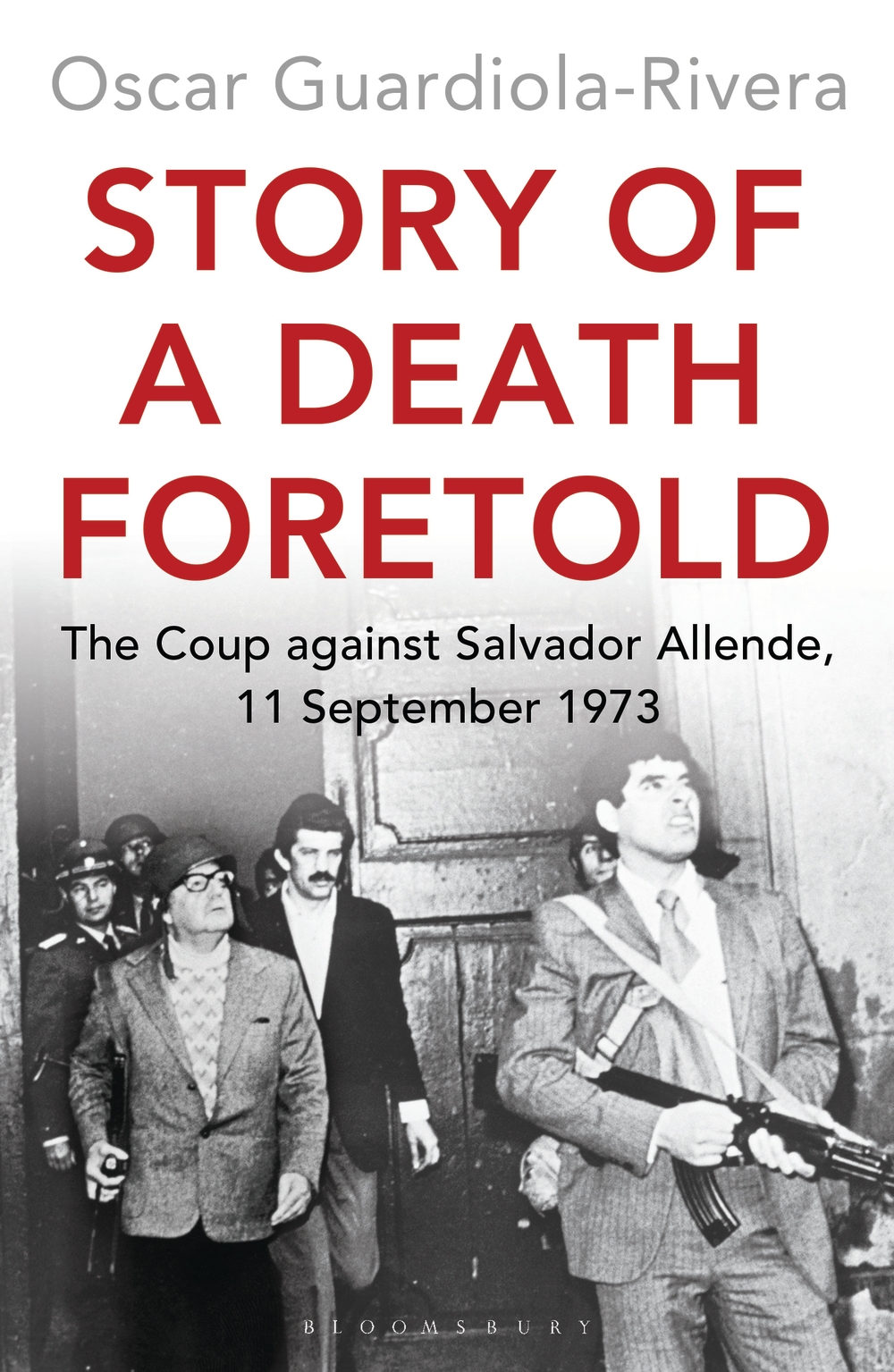 Story of a Death Foretold by Oscar Guardiola-Rivera

Story of a Death Foretold (subtitled The Coup against Salvador Allende, 11 September 1973) is an impressive and highly readable account of the fall of Allende and a thorough appraisal of the wider historical, cultural and geo-political threads that made the events of 11th September 1973 the death foretold of the title.

The account provides an overview of Chile’s political and social history interwoven with the career paths of the leading protagonists right up to the day of the coup and its aftermath. It also deals with the early days of the Unidad Popular government; Allende’s success in using Stafford Beer’s Project Cybersyn (a co-ordinated network of computers and telex machines) to circumvent the truckers’/distributors’ strike in 1972 (described as “some stunt” by army officers); the counter-revolutionary influences at home and abroad; the ruthless yet somewhat clunking and clumsy attempt to get the plot off ground and democracy’s last stand in the ruins of La Moneda Palace.

There is also time for asides. There is a somewhat brief insertion regarding Allende’s Gaitán project (Gloria, daughter of Jorge) and a more lengthy one, which involves Federico García Lorca playing lookout while Pablo Neruda and Blanca Luz Brum leave her husband, artist, David Alfaro Siqueiros, at the dining table of Natilio Botana (an Argentine press baron in the Citizen Kane mould) in order to get to know each other better. Then, there is a brief exploration of General Pinochet’s rather childish Napoleon obsession complete with books, statues, memorabilia and outright mimicry. All in all it packs a lot in, sometimes more convincingly than others.

The state of stasis

The fact that 41 years on the matter still attracts such interest is because popular democracy is being compromised everywhere. Whilst this doesn’t involve tanks, as yet, there is a clear coalescing of supine, corrupt, unrepresentative and unaccountable governments whose allegiances are increasingly not to those who elected them but to the interests of finance institutions and transnational corporations. Familiar?

The prevailing dogma in the West immediately post-war, notably following the death of Franklin Delano Roosevelt and the side-lining of his vice-president Henry Wallace, was the Cold War-infused Manichean view held to a lesser or greater extent by Truman, Eisenhower, Kennedy and Johnson, Nixon… morphing into the One World view held by G.W. Bush. The upshot was you could have the 57 different varieties of the day but if you were markedly left-of- centre, albeit constitutionally inclined, you were in for trouble. The last thing the Chilean elite and their US backers wanted was a government interested in self-determination, equality and independence (i.e. non-alignment).

Allende wasn’t doctrinaire. He wanted the Via Chilena – the Chilean Way. He wasn’t interested in government by force, utopian dreaming or drawing blueprints from the extensive canon of Marxist-Leninism. Indeed, he’d made overtures to Eduardo Frei’s Partido Demócrata Cristiano in an attempt to avoid confrontation and had given an undertaking that if a proposed plebiscite to resolve the impending impasse were lost, he would resign (this came to nought because the golpistas wanted blood).

Guardiola-Rivera notes that whilst Allende was on friendly terms with Guevara and Castro, he thought that Chile should use constitutional and legal means to achieve change. Similarly, he wasn’t impressed with Russia or his visit to its Eastern European satellites. He was essentially a radical pragmatist, who following on from his earliest mentor, a cobbler and neighbour by the name of Juan Demarchi, an Italian immigrant, who wondered why there was “an entire class of people who live on this planet but did not seem to share any part of it”.

In Chile this applied to most of the population but especially the industrial working class, the coal and copper miners (at the polarities), landless peasants and the indigenous Mapuches (10% of the population), who having fought the colonisers for 300 years, were still being massacred and dispossessed as if they had no right to exist. The poet Pablo Neruda wrote: “Under the pretext of exterminating bandits the colonisers have dispossessed the native inhabitants of their land and the Indians were killed like rabbits.”

Standing up and being ignored

As is explained in the early part of the book, the view of Chile’s elite was that most of the population (whom they referred to by the pejorative term, rotos or broken) had no value and could be treated as such. This is quintessentially of little difference from the attitudes of the conquistadores (terra nullius), those implied by Manifest Destiny or proffered by Henry Kissinger. The US Secretary of State famously stated rather tactlessly to the Chilean foreign minister Gabriel Valdés, in 1969, “history would never be made and would never occur in the South”. The great man then opined: “The axis of history starts in Moscow goes to Bonn, crosses to Washington and then goes to Tokyo.” The implication was obvious: you don’t register.

Chile’s gift to the political world has been “protected democracy”. Yes, you guessed it. That’s the one that protects people from what they really want. In the context of the Western Hemisphere, as Guardiola-Rivera underlines, this process was an established fact for the latter half of the 20th century onwards as evinced by the speedy correction of the democratic will in the cases of Jacobo Árbenz (Guatemala), João Goulart (Brazil), Juan Bosch (Dominican Republic) and Salvador Allende (Chile) plus serial meddling elsewhere.

There were many actors in the Chilean drama. What Guardiola Rivera’s account reveals is that the cabal ultimately responsible for overturning democracy, whilst prepared to receive assistance from elsewhere, was largely Chilean in composition. As he demonstrates, President Nixon did say that he wanted to make the Chilean economy “scream” and Secretary of State Henry Kissinger did fear an electable form of Marxism more than the guerrillas of Castro’s Cuba, but in inspiration, instigation and execution, this coup was made mainly in Valparaíso and Santiago.

The other Via Chilena

History has made great play of the CIA role, the legalistic pressure of the copper mining giants such as Anaconda and Kennecott and the input of the telecoms company ITT, but the input of outside forces was of less importance than the pressure generated from within.

Guardiola-Rivera characterises the Chilean establishment as the Import-Export coalition, which included the gremialistas (guilds of businessmen, manufacturers and franchisees) and the commercial aristocracy in the form of the Edwards and Matte families, whose interests extended to banking, media and industry and who were direct beneficiaries of being the junior partners to the global empires of (initially) the British and post-WWII, the US.

In effect, the choice was civil war or dictatorship. Allende stayed a democrat and a legalist to the last for one fundamental reason: coercion kills consent and without it there can be no political legitimacy or freedom.

Jaime Guzmán, General Pinochet’s advisor, pursued a variant of Francoist economics by way of Ludwig Erhard, the Mont Pelerin Society and Milton Friedman, and established the notion that individual and property rights were paramount in the furtherance of the economy and society. The economy and society were to all intents and purposes considered indivisible. Any collective element (e.g. society in a human sense, organized labour or collective endeavour) was not only atomised as invalid it was considered antithetical to those interests and therefore illegitimate. In essence the autarkic role of capital in servicing the gremialistas (trade associations) was the only game in town. Guzmán, it should be said, was also a believer in Jewish-Masonic-Bolshevik conspiracies of Second Spanish Republic vintage and this stoked his visceral hatred of Allende whom he thought embodied all of them.

Life in Pinochet’s Chile was tolerable if you wanted to go shopping or to work but for everything else there was an impending sense of menace complemented by nightsticks, rubber bullets, tear gas, water cannons, live ammo, DINA (the secret police), torture and death. A “state of exception” was always just around the corner because everything was determined by coercion (illegitimacy) and virtually nothing by consent (legitimacy). As Guardiola-Rivera notes half the population became the “enemy” overnight and there was no “bridge” between the government and the governed. The country could still be described as a “transition state” now because it retains the legacy of the 1980 constitution (decided by plebiscite under a dictatorship and duress).

An enduring irony of the Pinochet era is that having overthrown the Marxist “devil incarnate”, Allende, it ended up nationalising 80% of the banking sector and retaining the copper mines in public ownership. Whilst Allende had seen aid and credit cut to a trickle virtually overnight, the US, World Bank and IMF made hundreds of billions of dollars available to the murderous Pinochet regime (some of which went straight back out to compensate Anaconda and Kennecott over nationalisation).

In 1990, the Chilean economic miracle had collapsed leaving 39% of the population in poverty – more than when Allende came to power in 1970. This, of course, is what happens when you distort reality and truth and construct an ideological model that is demonstrably alien to both.

Saving Chile for shopping, Christianity, Stepfordianismo and gremialismo came at very high price. Those who had supported Allende ended up among the 40,018 dead, the tortured, the “disappeared” or the hundreds of thousands who went into exile.

A fitting epitaph for Allende was delivered by Gabriel García Márquez who had been invited to preside over the Second Russell Tribunal in Rome (convened to discuss human rights violations in Chile and Brazil) in December 1973:

“His greatest virtue was being consequential, but fate could only grant him that rare and tragic greatness of dying in armed defence of the anachronistic mess that is bourgeois law, defending a Supreme Court of Justice which had repudiated him but would legitimise his murderers, defending a miserable Congress which had declared him illegitimate but which was to bend complacently before the will of the usurpers, defending the freedom of opposition parties which sold their souls to fascism, defending the whole moth-eaten paraphernalia of a shitty system which he had proposed abolishing, but without a shot being fired.”

Story of a Death Foretold: The Coup against Salvador Allende, 11 September 1973 is written by Oscar Guardiola-Rivera and published by Bloomsbury. It is available from Amazon (UK | US)