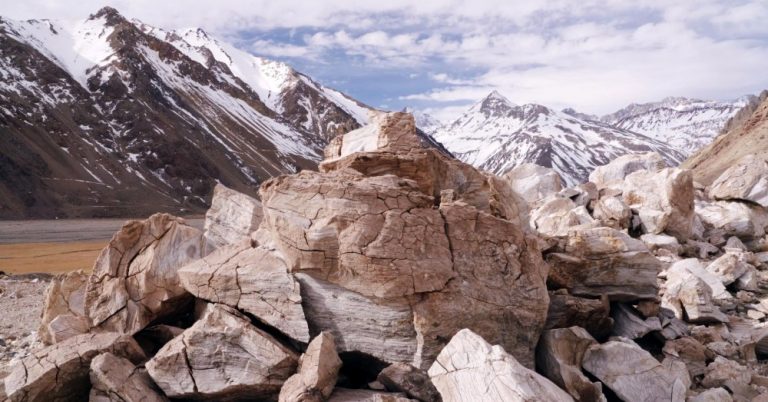 The Cordillera of Dreams

If you have ever flown over the Andes mountain range, you might have been struck by their sheer height. Even from cruising altitude, they can appear startlingly close. The Ojos del Salado, standing north of Santiago along the Chilean-Argentine border are the highest active volcanoes in the world, reaching up to 22,615 feet.

It is estimated that as much as 80% of the Chilean mainland is covered by the Andes mountains. These mountains suspend the narrative of legendary documentarian Patricio Guzmán’s latest film The Cordillera of Dreams (La Cordillera de los Sueños), winner of the 2019 Oeil de Or (Golden Eye) Documentary Prize at Cannes. The Chilean-French director, best known for The Battle of Chile (1975-1979), Nostalgia for the Light (2010), and The Pearl Button (2015), marks the screen with his signature narration, dreamy pacing, and penchant for imbuing deep meaning in Chile’s monumental natural elements as symbols for the social conditions of our past and present. This time, he hones in on the role of the Andes as a demarcation, a dividing line spanning from north to south, separating east and west.

Is this range a protector or an isolator? How does it hold up to the demands of progress?

For many, Guzmán points out, it became a barrier of separation between those who left and those who stayed following the country’s 1973 coup d’tat. As in many countries experiencing dictatorship, a struggle for controlling the narrative internally and with the outside world develops to perhaps shield or justify the brutal and repressive methods taking place. While The Battle of Chile captured the unrest in the early days of Pinochet, Guzmán’s departure for France interrupts his direct experience of what took place in his country during subsequent years. He calls on Chilean film-maker Pablo Salas’ extensive archives to fill the gaps, revealing scenes from the 1980s. The violent images which we more often see in black and white are suddenly plentiful in colour, with more contemporary details. The brutality in Chile spanned decades, and really didn’t take place so far in the past. We realize the bravery of those who went out of their way to stay and film, so others might see what happened, so others could not deny what took place. Film-makers record “the memory of tomorrow,” Guzmán asserts. This calls to mind the anonymous people standing up to the firewalls of today, sending recordings to the world from Hong Kong and other places in desperately in need of being seen.

The larger question posed is that all of this darkness, is in exchange for what? In Chile, the economic policies implemented under Pinochet and increased consumption patterns maintained to this day require constant extraction from the mountains. Despite every skyscraper, the scars of the past cannot be erased. The stones in the streets hold the pain of history. Going forward, Guzmán asks, can the mountains inspire us to reclaim a sense of innocence and wonder?