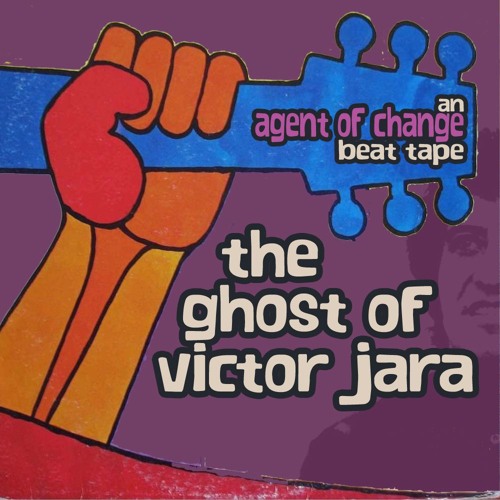 The Ghost of Victor Jara: A Beat Tape by Agent of Change

Musicians from past generations often continue to inspire and guide us in the present, sometimes even many years after their passing. So it is with the Chilean folk singer Victor Jara, a visionary poet who realised the power of song to reach into the consciousness of the disenfranchised and the dispossessed. Jara used his music to raise social awareness and encourage people in the marginalised sectors of Chile to take a stand in determining their own destiny.

It’s therefore with great happiness we present this beat tape from London-based producer Agent of Change, who has sampled and remixed many of Jara’s tunes to create a new narrative through which the singer can reach contemporary audiences. Jara’s message continues to resonate loudly today, more than forty years after his death at the hands of General Pinochet’s military thugs. We’ll leave it to Agent of Change to tell the rest of the story.

“An artist must be an authentic creator and in very essence a revolutionary… a man as dangerous as a guerrilla because of his great power of communication” – Victor Jara.

The legendary Chilean singer Vic­tor Jara was one of the lead­ers of the Nueva Can­ción (New Song) move­ment – a move­ment based on socially-com­mit­ted music; music that takes a clear stand for free­dom, against poverty, against imper­i­al­ism, against oppression. Nueva Can­ción spoke of the reality of the downtrodden, often incorporating indigenous musical themes, and in so doing gave voice to the mil­lions of peas­ants, work­ers and indi­gen­ous peoples of Latin Amer­ica who were being crushed under the weight of US dominance.

The date 11 September causes most people nowadays to think of the World Trade Centre attacks of 2001. However, for many, it will forever be remembered as the date on which, in 1973, the Chilean military overthrew the socialist government of Salvador Allende in a bloody coup. That coup, which brought the fascist Augusto Pinochet to power, was in large part coordinated by the CIA (Henry Kissinger is on record as saying: “I don’t see why we need to stand by and watch a country go communist due to the irresponsibility of its own people. The issues are much too important for the Chilean voters to be left to decide for themselves.”)

In the after­math of the coup, thou­sands of social­ists, com­mun­ists and activists were taken host­age by the army and roun­ded up in Chile Sta­dium. Along with many oth­ers, Vic­tor Jara was beaten and tor­tured; his hands were broken, but his resolve was not. When sol­diers taunted him and told him to play some­thing on his gui­tar, he played Ven­ce­re­mos (We Shall Tri­umph) — the cam­paign song of the 1970 elec­tion that had brought the social­ist Sal­vador Allende to power. Four days later, Vic­tor Jara was machine-gunned to death by sol­diers in the stadium.

Across the world, Vic­tor Jara is remembered as a hero and a mar­tyr; an exem­plary musi­cian who put his skill and his pas­sion at the ser­vice of the struggle for a bet­ter life for human­ity. In com­mem­or­at­ing his death and cel­eb­rat­ing his life, we remem­ber the prin­cipal les­son he teaches us: that cul­ture is a weapon, one which must be wiel­ded effect­ively in these times where oppres­sion and repres­sion are so pre­val­ent. As Paul Robe­son said, “The artist must elect to fight for free­dom or slavery”.

This beat tape, which samples many of Victor Jara’s classic songs, aims to help spread the legacy of Victor Jara and connect it with a new generation of socially-committed music.