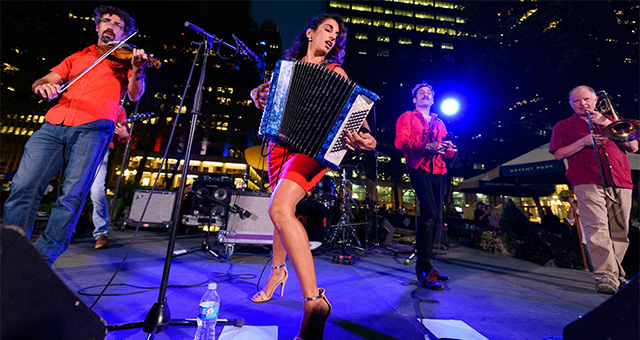 Accordions Around the World Brings Global Sounds to NYC

“Accordions Around the World,” a series that brings over 100 accordionists, as well as bandoneón, bayan, concertina, and harmonium-players, to perform at New York City’s Bryant Park has an exciting lineup which includes several Latin American acts. The series finale, on the 21st of July, includes a Colombian Independence Day celebration with vallenato singer Gregorio Uribe.

Also on the bill on the night of the finale is Brazilian forró group, Osnelda, led by Brazilian accordionist Felipe Hostins, who mixes elements of the music from his South Brazilian upbringing with forró, the Northeastern music from Brazil.

Around the World is a four-week series curated by Ariana Hellerman, founder of Ariana’s List, a leading source for local cultural world music recommendations.

“Accordion is often confused for yesteryear kitsch in America; but, in many parts of the world, it’s one of the most important instruments that convey the sound of the region,” Hellerman says. “In New York, we are lucky to have access to many of these cultures. In addition to showcasing the versatility of the instrument and providing an intimate and accessible performance experience for audiences and passers-by alike, my priority for Accordions Around the World is to include immigrant accordionists, giving them and their communities a space for sharing their culture.”

Accordion Picnics are held each Wednesday between through the 19th of July, and spotlight 24 musicians performing easily-consumable 15 minute sets. We’ve highlighted the Latin American performers here:

The series culminates on Friday, 21 July, with the Accordion Festival, which will feature Bil Afrah Project, which celebrates the legendary Lebanese album, Bil Afrah, by Ziad Rahbani; Sunnyside Social Club, a soulful cabaret/punk blues outfit; Osnelda, as mentioned above; and, Zlatni Balkan Zvuk, the debut project from top accordionist Peter Stan that brings Balkan wedding music to the streets of New York City.

The final act of the evening, Colombian accordionist and big band leader, Gregorio Uribe, brings a Colombian Independence Day celebration to the park with special guests.

Gregorio Uribe, born in Bogotá, Colombia, has made a name for himself in the Latin music scene of both New York City and Boston. Well known for leading the Gregorio Uribe Big Band, a 16-piece orchestra that blends cumbia and other Colombian rhythms with powerful big band arranging, Uribe released the debut album Cumbia Universal (Zoho Music) featuring 8-time Grammy-winner and Latin music icon Rubén Blades in 2015. Uribe has been a guest artist with multiple Grammy winner Carlos Vives on several occasions, most recently at Madison Square Garden Theater.