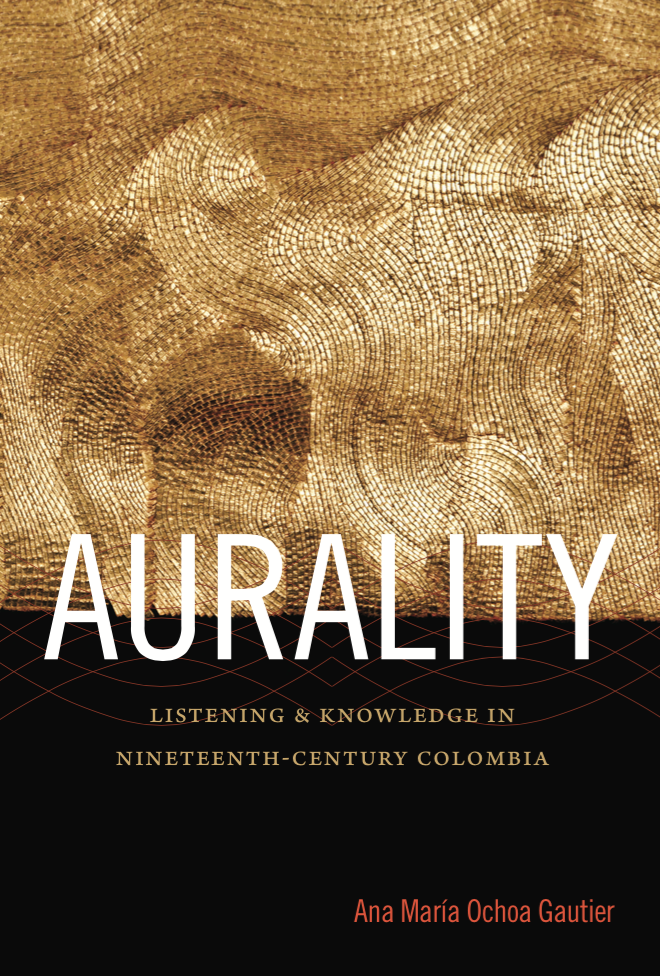 The starting point of this book was originally supposed to be a study of popular music in Colombia from 1930-1970, with specific reference to the correlation between music and the literary. That changed when the author listened to archival material from National Radio in Colombia and found that 19th-century philology (the study of language) played an uncharacteristically large role in determining and defining national identity. Why was this so? What was it about Colombian culture that in the beginning was the word, and the word was castellano?

Ochoa Gautier’s thesis posits that this oddly grammarian, fratricidal republic – it has had, after all, a disproportionately large number of philologist and grammarian presidents and a historic reputation for internecine conflict – fashioned its national identity based on two perceived truths: the primacy of Catholicism and its de facto means of dissemination, castellano. Central to this thesis is the idea encapsulated by Colombian philosopher Santiago Castro-Gomez, that colonial power represents a form of “ocular-centrism” whereby the external observer attributes omniscience to his own vision.

Ochoa Gautier explores the creatures of their time: the colonialist, the missionary scribe, the explorer, the ethnologist, the post-Enlightenment seeker, the new Romantics, the Darwinians and the devotees of God-given rights. “Naturally”, few of these people were interested in anything the locals might say or do and similar opprobrium was afforded to those of mixed race – the mestizaje in their various combinations. Ethnocentricity was legion especially in the interpretation of culture, language and states of development. Interestingly, a country composed of Hispanidad, the indigenous and the African, with admixtures from elsewhere, came to express itself in a language that pertains to only one.

In its brilliance, fecundity and abundance, Colombia was a feast for the eye, tongue, ear, word and imagination, yet its founding fathers caged it. A strict marker was placed between where “nature” stopped and “culture” started.

When Alexander von Humboldt and others encountered the zambo (Afro-Amerindian) bogas (boatmen) on the Madgalena River, they were underwhelmed by their language, sounds and demeanour. Interestingly, though, whilst von Humboldt wearied of his interlocutors in the zambo village of Zapote, when he asked them what they were doing and why, they were more than accommodating.

The acoustics of the New World were different. The spatial and temporal conditions were different and the sheer abundance of life and sound – zoological in its broadest sense – were bewildering to the unaccustomed or indifferent ear. Not only that, there was a fundamentally different outlook on where nature stopped and humanity started. Von Humboldt, overwhelmed by the deafening animal din from the jungle, inquired of the indigenous tribesmen what was going on. The answer was succinct. “They [the animals] were rejoicing in the beautiful moonlight and celebrating its return.” Out of such eloquence, somehow the idea of primordial simplicity was born.

Foremost among the advocates of standardisation were José María Vergara, a diplomat, journalist, politician and writer, who authored Historia de la Literatura en Nueva Granada Desde la Conquista Hasta la Independencia 1538-1820 (first published in 1867) and Miguel Antonio Caro, a fellow grammarian (and president of Colombia from 1892 to 1898), and the man who penned the country’s constitution (extant until 1991). Whilst both were fixated on Hispanidad and rooting out an appropriate poetry, literature and music to underscore their purpose, neither man noticed that in Juan de Castellanos’s Elegías de Varones Ilustres de Indias (Elegies of Illustrious Men of the Indias), they had a ready-made epic that was directly applicable to their own backyard. Not only did they not see fit to acknowledge their own literary origins as conquerors and colonialists, they didn’t see fit to document the music and oral traditions of the people (e.g. the Muiscas) they had vanquished.

The ‘aurality’ of which the author speaks about in the title is elusive. Why? The reason for that was simple, at least initially: nobody wanted to hear it. In the Colombian context castellano became a polished imposition in which anything non-castellano was systematically expunged by a zealous devotion to linguistic rectitude, lexicographical revisionism and selective readings of tradition.

Ochoa Gautier claims that in a country as racially mixed and diverse as Colombia, the Creole elite, without recourse to notions of blood purity, took refuge in colonial lineages, regional identities and the use of castellano to control the reins and instruments of power. The concomitant of this was that you needed to be pay homage to Catholic Hispanidad to be a full citizen. The existence of the Inquisition of Cartagena, which operated from the 16th to the late 17th century, saw to it that conversos (converted Muslims and Jews), indigenous shaman and Afro-animist sorcery got a torrid time.

This resulted in what Ángel Rama referred to as the “lettered city”, another priestly conclave, not unusual in Latin America, which held dominion over acceptable signs, symbols and linguistic norms. How castellano became prior and pre-eminent in a country where once it didn’t exist, poses interesting questions about what happened to the original languages of what was referred to in the colonial era as New Granada and why Catholic Hispanidad swept everything else away that was other. Participation – and personhood – became congruent on following the precepts of this pedagogic, philological, linguistic authoritarianism not only to the letter, its syntactical disposition and orthography, but to the sound of the letter as well. Not even musical notation was spared the orthographic treatment. Ochoa Gautier does a thorough job of contextualizing the process and its ontological and epistemological underpinnings.

Not everyone was best pleased by this. Ochoa Gautier notes that in 1835, Juan Nieto, a mulatto or pardo member of the Cartagena Caribbean political elite, complained bitterly to President Francisco de Paula Santander of how Andean “authorities now ‘vomited their rancour’ against the port city and ‘shockingly ridiculed cartageneros for their alleged illiteracy,’ their ‘way of talking’ and ‘their customs.’’’ You could belong but only on their terms.

Statements of what it meant to be Colombian and the basis on which these were made, were later picked up by Helcías Martán Góngora, the 20th century Afro-Colombian poet from Guapi on the Pacific Coast, who would say “the tip of the oars of the bogas of the Dagua River” from Jorge Isaac’s novel Maria and La Cancion del Boga Ausente (The Song of the Absent Boatman) by Afro-Colombia poet Candelario Obeso, provided a voice to negritude long before the advent of the Afro-Antillean poets or the Négritude Manifesto of the 1930s. Obeso was one of few with the poetic sensibility to transcribe his sixteen poems through the use of non-standard orthography, sonorous pronunciation, accents and different modes of speaking (i.e. he gave them form, voice and lent them his ears).

Graciela Maglia, a professor modern and classical languages, describes Obeso as a writer who was ahead of his time in two senses: by proposing Caribbean culture as national in the midst of a scholarly project that sought to reduce its significance and by aesthetically “confronting the literary canon of the times” through the formal particularities of Cantos Populares de mi Tierra (Popular Songs of My Land).

The father of this dissent to the prevailing orthodoxy was Jorge Isaacs, the son of a converso and a soldier, politician and writer. A member of the Bogotá-based literary society, El Mosaico, his was a rare voice in exploring the cultures of the indigenous and mestizaje populations for their own sake. He produced studies of the languages of the Ika and Guajiro and wrote abstracts on the languages of the Chimila and Motilones. Whilst others such as Ezequeil Uricoechea, the philologist and scientist and Lorenzo Hervas y Panduro, the Jesuit linguist and ethnologist (author of Idea del l’Universo), also wrote indigenous grammars, they did so for the purpose of evangelising rather than as creative works or exemplars of the indigenous voice.

As a liberal and secularist this brought him into conflict with conservative opinion as advanced by José María Vergara and the philologist and politician Miguel Antonio Caro. Caro was an implacable opponent of Isaacs both on the grounds of his politics and secularism. The idea that anyone could attach importance to indigenous myths and evolutionism over biblical revelation was anathema to him. The notion of a person existing in the historical-political realm was a crucial step to bringing them into the juridico-political one. That wasn’t an option unless you were a Catholic and spoke properly, i.e., grammatical, orthological, enunciated castellano.

In El Darwinismo y Las Missions (Darwinism and the Missions), Caro gave Isaacs a piece of mind. Not only did he disparage the work of this impertinent converso, he questioned his credentials and expertise in correcting missionary grammars of languages that he viewed as discordant, barbaric and worthless. The vital thing for him was that Colombians ‘hable en cristiano’ (spoke Christian – a synonym for ‘bien decir’ or well-spoken).

Aurality is a very interesting study but unfortunately its academic presentation will make it unappealing to many. It is one of the hazards of academic writing that the format and theorising tend to produce a kind of literary steeplechase. It’s a pity, because Ochoa Gautier’s evident style is buried under all that.