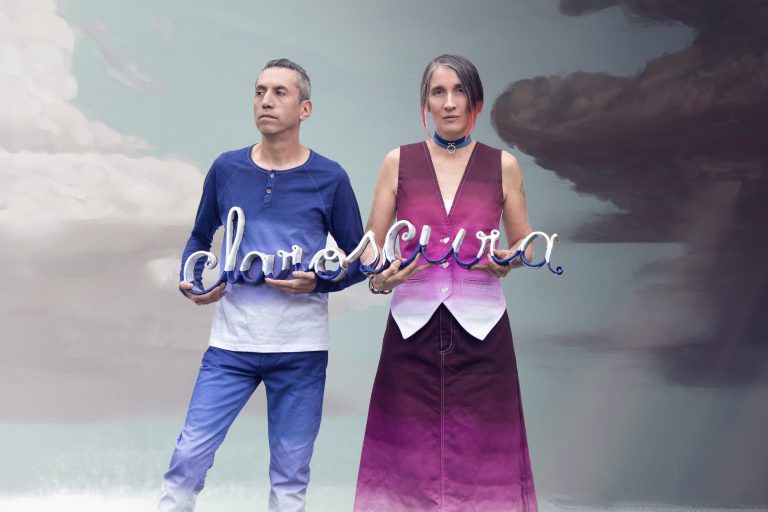 There’s been a ten-year gap between Rio, Aterciopelados’ most political studio album, and their latest release Claroscura. The world has has changed a lot in that time.

The Colombian government has signed a peace treaty with the FARC, the music business has shifted to streaming services and civil society movements in Latin America have risen up against violence towards women. While all this is clearly reflected in Hector and Andrea’s new record, it’s not what it’s all about. “Esto es pura música bonita”. This is all pretty music, Héctor claims.

He is relaxed, yet excited about Bogotá’s anniversary celebrations, where the band will perform with the Philharmonic Orchestra at the Santo Domingo Theatre, as well as playing a public show at Simón Bolívar Park. Aterciopelados are now veterans of the Colombian music scene. Since the moment in 1994 when Universidad de los Andes’ student radio first played an experimental track they produced while at art school, the duo have produced ten records, won three Latin Grammy awards and been involved in some of the most emblematic live performances in Latin American rock history (“Gimme the Power” with Molotov, “Ciudad de la Furia” with Soda Stereo and the late Gustavo Cerati).

And while saying that the band is one of the most influential bands in Latin American rock and pop is by no means an overstatement, for the past few years Andrea and Hector have for the most part been doing whatever the hell they wanted, in a good way. This is to say, leaving their audience somewhat surprised by not committing to a particular aesthetic or musical genre whatsoever, and this continues on the new album. Claroscura’s first track is “Play” (featuring Chilean rapper Anita Tijoux) and begins with the following line: “Juguemos, let’s play. No te estreses, ok? Mi rey.”.

At a first listen, the simplicity of the pop composition, the easy lyrics, dampen any high expectations for the rest of the album. One expects an easy listen. This notion is furthered by the more lo-fi electric cumbia/blues/ranchera-infused tracks (“Cuerpo”, “Piernas”, “Show”), all sizzling with quaint humorous lyrics. The choice of Buenos Aires rock veteran Cachorro López (once of Los Abuelos de la Nada) as the head producer of the record is an interesting one, nodding to both Argentinian rock legacy and the newer sound of pop-infused indie records hailing from the Como Sur, yet also raising precise expectations of the record’s sound and genre. And while the record follows a steady acoustic line, the record also counts a number of powerful and eclectic outliers.

Most interesting is “Ay Ombe”, a vallenato track featuring Jorge Celedón. Along smooth country-like accordion and upbeat drums, Andrea and Jorge address domestic violence issues hushing “consentimiento, comaaadre” into the mic. “Soñemos un Bosque” may as well become the favourite of older audiences. The track features beautiful flute compositions and playfully-arranged Andean hooks. The reference to Luzmila Carpio (the duo have previously taken singing lessons from her) in the high pitch choir complementing the riffs is a beautiful one. Finally, “Dúo” is a self- homage to the band, honouring their trajectory along sharp guitar riffs and deliciously funny lyrics within a blues-like structure. The eclectic nature of the record is impressive and raises questions about how the album was made.

“The tracks all come from different times along the past ten years”, explains Hector. “Last year we got together and made a preselection of all the songs we had compiled along the years. We got together with Cachorro in August to define how we wanted the record to sound and defined the tracklist only in December. I then took on to produce a further seven of the remaining tracks. Our aim was to combine a broad range of Latin American sounds, yet also to experiment with electronic sounds. We were able to work with champeta, blues and vallenato, among other rhythms. The Claroscura concept is also reflected in a musical sense. There are lighter and darker-toned tracks on the record.

Including vallenato on the record is a bold move with regard to the band’s earlier sound and message. Can you introduce the genre for those who are less familiar with its sound and legacy?

Hector: Vallenato is influenced by both indigenous and African rythms and is most present in the coast of Colombia. The sound has risen to be one of the most popular sounds in Colombia, yet remains controversial due to the sexist content in its lyrics. Our song “Ay Ombe” features Jorge Celedón, a proponent of Nuevo Vallenato, which leaves behind the sexist connotations of the genre. In the song Andrea denounces violence against women and Jorge apologetically responds. The production of the song goes hand in hand with the rising campaigns throughout the continent denouncing the high rates of femicide in the region, which have led us to shed more and more light on the topic. Very relevant is the Ni Una Menos movement, which has gained much relevance.

Can you explain a bit more how the band collaborates with social movements in the region?

For my part this has been in the ecologist movement. Since 2010 we have been involved in the Canto Al Agua movement. We are active in raising awareness of water and environment related issues. We support campaigns dealing with government affairs. Andrea works a lot with women movements and has produced tracks for them. However, I’m also involved in the feminist and gender cause.

Whenever we are invited by social movements we support or even city councils highlighting importing advances in sustainable development we support, this makes for a great experience. This is because this gives us the opportunity to become spokespeople and advocate for a better development as human beings overall.

Another very interesting turn in the band’s trajectory is that you have been playing outside the Spanish-speaking world. How has this experience been?

Luckily we have been able to take our music to places like Brazil, the US, the UK and Germany. The world music festivals in Europe have been very enjoyable, as they have a more family-oriented vibe, making it possible to bring our messages across better at times, different from the party-oriented events and venues in Latin America.

You are an active advocate of the vegetarian lifestyle. How have you been able to bring your convictions across in this sense?

It’s at times challenging to find the rate stage to bring across such messages. However it has been vital to be involved in roundtables on the matter not only as musicians but as activists. This was the case in Cuenca this year with Canto al Agua. Saying no to meat means supporting the cause against the deforestation of the Amazon basin (due to industrial cattle farming and soy bean production). The Amazon basin lies so close to us. It’s all a matter of waking up to our ancestral beings and recognising that we hold a responsibility in these matters, beyond the human flaws and fallbacks.

Which is where we come back to the production of Claroscura, where you aim to draw a picture of that dichotomy between good and bad. How have you been able to bring this into the sound of the record

Honestly, this has been an effort. After ten years, we were aiming to produce an honest and compelling record. It had to sound both fresh and new despite giving continuity to our music. Much is grounded in our personal developments, which is what has also influenced the overall theme and sound.

Something that has essentially changed since 2008 is the music and particularly the streaming industry. How has this affected the way you produce and consume music?

This is always the other side of the coin. The panorama of record production is changing. We’re actually lucky to be signed with Sony Music and be able to actually produce a record. Many artists no longer have this option and opt for digital-only productions. We definitely had to adapt to this new scenario, as we have practically missed out on the technological development in the 2010s, we had no clue about the role of social media and publishing records over streaming as we were not in rotation during the critical years of this developing.

As for my own consumption of music, I see that streaming most of all opens more possibilities of exploration. Andrea however is more reluctant to this, as she is more engaged in exploring records as whole works. Having children changes this perception obviously, as they bring new genres into the household, such as urban genres and reggaeton,

Now talking about reggaeton having a momentum on the international arena, does this also affect the perspective of artists of other genres?

Of course it does. In Colombia alone this has led to a massive reactivation in music production, leading to a rise of producers in cities like Bogotá and Medellín. At times there are synergies with rock or electronic music. For instance we have also made a music video with a production company that has traditionally worked with urban music. Of course, as any genre, there is a political dimension to the genre that needs to be overcome. However I feel that with the likes of J Balvin reggaeton is undergoing a positive evolution. Even if we have been reluctant to the genre before, we now explore it more than a few years ago.

Talking about new music and new genres, do you think that artists nowadays have more pressure to comply to the market dynamics?

We have been lucky to develop our music in a free and generic manner. What is happening in Colombia nowadays is that there is a select group of successful producers picking up new artists and launching big hits. While this experiment can be of benefit for both sides, this also disrupts the formative process of the artist. We have been offered similar deals but felt like Aterciopelados has too many things to say, to permit external involvements or pressures.

This may be an important observation for listener and consumers of music, as we oftentimes are unaware of the politics behind the production. Now the particular case of Aterciopelados is compelling because you are considered by many of us as spokespeople of the peace movement in Colombia. What is your message to artists producing in conflict zones?

What is happening is the artists that have limited voice and exposure carry a valuable message, as they are closest to the stories of the demographics that are affected by armed conflicts. The peace process is not as easy as signing an agreement. For us living in the cities it is important to give a stage to those that can talk first hand about what is happening in the constant social struggles for peace.

Aterciopelados have upcoming shows in Colombia, Mexico and Spain. See their Facebook Events for more details.

Visit aterciopelados.com to find out more about the band, their music and the campaigns they support.