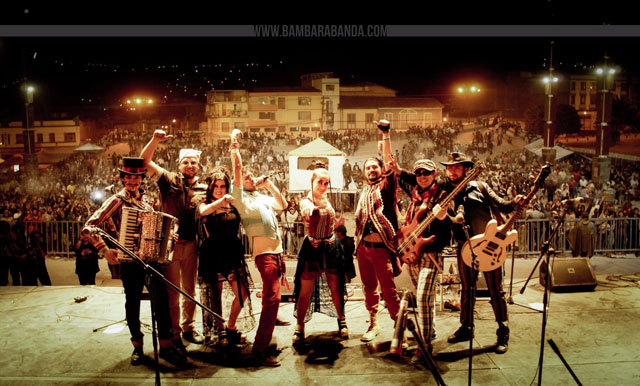 It’s carnival time in San Juan de Pasto, Colombia, and a band that hails from the city (in the state of Nariña) has a new song to celebrate el “Carnaval de Negros y Blancos.”

BAMBARABANDA, an octet who bill themselves as “new Andean sounds” (Pasto is located in the ‘Atriz Valley’, on the Andes cordillera, at the foot of the Galeras volcano), wrote “Guagüita Cuna” as a way to “transmit and convey the feelings” that the unique carnival brings to Pasto.

The word “guagua” is what children are referred to in Pasto.

“[The song is] about the family having fun, the legacy passed down onto the children, and a party that is passed from generation to generation and year after year,” the band says. “The song reflects one’s first experience of this carnival, one’s first contact with friends and strangers, all experiencing joy amid their sorrows, while shouting, “Que viva Pasto carajo!”

This ‘Black and Whites’ Carnival — the largest such celebration in the southwestern part of the country, takes place between January 2nd and 7th each year and, in 2009, UNESCO proclaimed the carnival as one of the Masterpieces of the Oral and Intangible Heritage of Humanity. In 2002, it was proclaimed a National Cultural Heritage event.