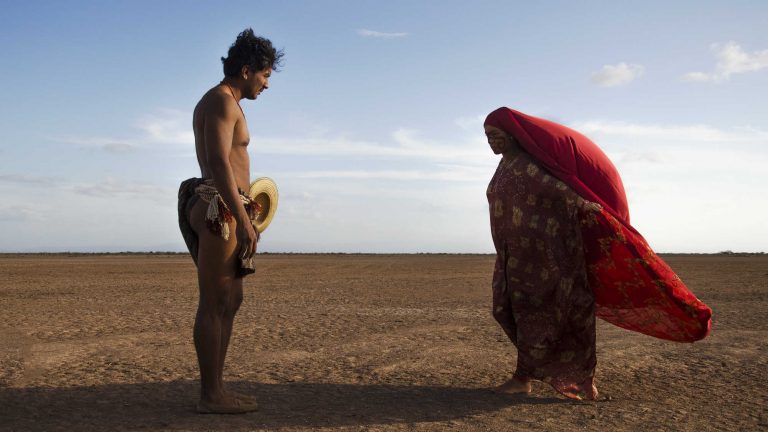 Ciro Guerra and Cristina Gallego’s new ethnographic drama Birds of Passage is a tale about marijuana trafficking in Colombia in the 60s and 70s seen through the eyes of the indigenous Wayúu community of the Guajira peninsula, the northernmost point in South America. The plot of Birds of Passage follows the familiar trajectory of a narco-thriller and has been compared by some critics to the Godfather or even the popular television crime saga The Sopranos. However, the incredible attention to detail and cultural specificity of Birds of Passage succeeds in transforming the familiar story into a complex analysis of the damaging effects of colonialism, narco-culture and drug tourism on Colombian society. By focusing on the rise and fall of one Wayúu family, Guerra and Gallego reflect on the universal loss of tradition and community in an increasingly greedy and divided neo-capitalist world.

In August last year I had the opportunity to visit the Guajira peninsula where vast windy desert meets vivid blue Caribbean sea, and it remains imprinted in my mind as one of the most unique settings I have ever experienced. The visually absorbing opening scene of Birds of Passage, in which a young Wayúu woman, Zaida (Natalia Reyes) performs a traditional Yonna courtship dance dressed in red silk, captures the uniqueness of the landscape and the richness of the Wayúu culture. The beautiful Zaida appears like a bird; her dress flapping like wings in the wind as she dances around the circle of gatherers. Gazing at her from the crowd is Rapayet (Jose Acosta) who steps forward to dance the Yonna with her. The mother of Zaida, Ursula (Carmina Martinez) a powerful matriarch, looks on disapprovingly until she learns that Rapayet is the nephew of Peregrino the Word Messenger (Vicente Cotes), an important figure in the Wayúu community. Eventually it is agreed that if Rapayet is able to come up with the impressive dowry requested by Ursula, Zaida will be promised to him.

Rapayet and his alijuna (non-Wayúu) friend Moises (Jhon Narváez) trade coffee to try and raise some money for the dowry. Whilst in the bar, after a day of hard work and little reward, they find themselves sat next to some gringos who have apparently come to Colombia with the Peace Corps and are handing out anti-communist propaganda leaflets. The bar man tells Rapayet, ‘they say they are rallying against communism but what they are desperately trying to find is marijuana’. Rapayet forms a plan as he remembers his cousin, who is from a different community based in the foothills of the Sierra Nevada, is able to cultivate the ‘wild grass’. Historians have confirmed that there is no evidence to suggest that the Peace Corps or the Wayúu were involved in drugs trafficking in the 60s and 70s. However, Guerra and Gallego are clearly using these details to comment on the colonial history and modern equivalents of narco-tourism and voluntourism that have become increasingly popular in Colombia in recent years, with damaging consequences for Colombian society.

After a successful trade deal with the gringos, Rapayet returns to his community with the extravagant dowry of 50 goats, 20 cows and various stone necklaces in tow. In a trope typical to the magical realist genre, Birds of Passage seems to have no clear linear narrative but instead unravels in a dream-like sequence with five chapters or ‘cantos’ (songs) entitled ‘Wild Grass’, ‘The Graves’, ‘Prosperity’, ‘The War’ and ‘Limbo’. The narrative skips years into the future where Rapayet and Zaida are now together and he and his mother-in-law, Ursula, are running a profitable drug business in partnership with the gringos. The scenes become increasingly bloody as Rapayet is betrayed by his untrustworthy alijuna friend and business partner, Moises, whom the Wayúu order him to kill in order to protect his clan.

After more bloodshed and betrayal we are projected further still into the future in the chapter ‘Prosperity’. The surrealist opening shot of this ‘song’ shows a modern white mansion against the backdrop of the barren dry desert land of the Guajira. The mansion is filled with seemingly unused new furniture and the family all now wear shiny new gold watches and jewellery. One of the most striking images in the film is the scene of Rapayet and Zaida sleeping comfortably together in their hammock, which is hung beside an untouched king size bed. These stark juxtapositions reveal the tension between tradition and modernity in Colombian society, especially amongst indigenous groups, who are forced to sacrifice traditions to assimilate to the increasingly homogeneous globalised capitalist society.

Rapayet and Zaida may still be clinging on to their Wayúu identity and customs. However, Leonidas (Greider Meza), Zaida’s younger brother, who has grown up entitled and corrupted by greed, has lost all respect for his Wayúu heritage. In the end, he puts his family in serious danger, becoming impulsive and violent and defying all the Wayúu rules of honour. Leonidas, the new generation of Wayúu, represents the moral corruption and loss of values in modern society. As Gallego said in a previous interview for Sounds and Colours with Danny Concha, “we began to see the Wayúu as a metaphor for Colombia… a society which has in many ways betrayed itself and lost its way. Like the protagonists of the film, our country has begun to destroy itself morally with the arrival of rampant capitalism.”

The film ends with the death of Peregrino the Word Messenger. Without a Word Messenger, whose role it is to resolve any problems in the community with the power of the word, the Wayúu clan can no longer function. Ursula’s words to Zaida in the opening scene of the film ring true; “If there’s family, there’s respect. If there’s respect, there’s honour. If there’s honour, there’s word. If there’s word, there’s peace”. Once communication, respect and honour have broken down we are left with nothing. Suddenly the previously beautiful desert landscape of the Guajira seems vast, empty and barren. In the end, Birds of Passage serves its purpose, as a poignant reminder of the need to create a sense of solidarity and community in a neo-capitalist world which is becoming ever more divided.

Birds of Passage is available to watch at select cinemas and online.