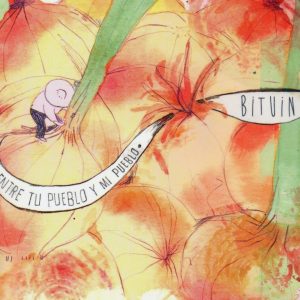 Colombia has seen its fair share of folkloric fusion over the past few decades, providing a revised version of traditional melodies from the Atlantic coast to the cordillera of the Andes mountains. This was prior to the impressive musical talents of the Bogotá-based quartet Bituin, combining folkloric sounds with two voices, a double bass and a drum kit. The group consists of two sets of siblings: Santiago and Daniel de Mendoza and Juanita and Valentina Añez, providing a fresh new version of the traditional cantautor genre.

The new album Entre Tu Pueblo y Mi Pueblo does not just act as homage to the greats such as Violeta Parra, Atahualpa Yupanqui and Mercedes Sosa, the album features some of the most loved songs from Chabuca Granda, Astor Piazzolla, Juan Carlos Núñez, Alfredo Zitarrosa, Los Cuates Castilla and Tomás Méndez, with original versions of “Punto y Raya”, “El Surco”, “Violetas Populares” and the emblematic “Cucurrucucú Paloma”. It’s dynamic and thought provoking lyrics guide us through a rich and fertile land, from fields cultivated by campesinos to the arrival of multinational companies.

As the group’s drummer Santiago de Mendoza explains “We want to give this music all of our influences from both experimenting and improvisation (…) there are people who say that we deform the songs and create very forceful lyrics, but what we do is dismantle them and then put them back together again.”

The quartet got together in 2010 and has since placed at The Ibague Jazz festival and the prestigious Jazz al Parque in Bogota.

Entre Tu Pueblo y Mi Pueblo opens with the chaotic “Punto y Raya” and a heavy, rhythmic puya drum riff supporting the aggressive vocals shaming immigration and racism. “El Surco” is the next track and the first single to be released from the album, jazzier and softer with a haunting melody and vocals. “Diez Décimas” leads us further into the album, the mysterious lyrics and unbeknownst pueblos facing violence and storm-filled skies in the Colombian highlands.

The fourth track “Violetas Populares” is my favourite. It’s Violeta Parra mixed with Lila Downs, a new take on the Piazzolla classic, at times chaotic and frenzied in between quieter interludes. A pueblo facing gringos and the arrival of multinacionales. “En Su Lugar” is a mellow, jazzy track, beginning once again with the distinct almost childlike jibes that are done so well across this album, prior to the vocals maturing and truly displaying the richness of these two sisters’ vocal range. “El Pastor” is a beautiful contrast of silky vocals with a funky baseline.

“Noche Cruda” is a much more experimental track with a hypnotic, abstract mix of vocals and percussion. Prior to the infamous “Cucurrucucú Paloma”, an updated version of the Lola Beltrán classic, with a much sultrier feel as both high-pitched vocals clash with those of a lower pitch and the iconic dove cooing. The album concludes with “Señora Colombia” a nod to Mompox and Cartagena, mixing jazzy cumbia vibes with traditional gaita flutes whilst acknowledging the wondrously-contrasting Colombian landscapes.

Entre Tu Pueblo y Mi Pueblo is a cacophonous joy, providing a cool new spin on traditional Latin American classics and propelling them into the 21st century and beyond.

You can find out more about Bituin at bituinmusica.com