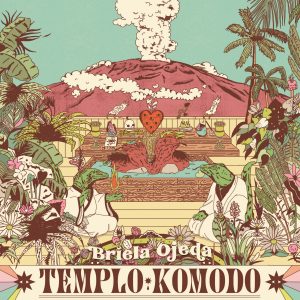 Originally from Pasto in the Nariño Department of Colombia but currently residing in the capital of Bogotá, Briela Ojeda has been making an impression with her first studio album, Templo Komodo, not only within the local Bogotá music scene but further afield also.

Recorded in an old puppet theatre, Libelula Dorada, in Bogotá, Templo Komodo is a surprising product of the quarantine period of 2020; the album takes inspiration from the still, calm, and isolated environment in which Briela found herself in her hometown of Pasto. The feminine energy gifted from her family, the natural imagery of the Galeras volcano, and taking the time to heal spirituality while the whole world slowed down, allowed Briela to create a musical parallel to the reflective and introspective nature of 2020.

As a designer, and someone who is inspired by myths and ancient stories, Briela’s musical creativity is ignited through imagery. She uses images as sources for her writing; Templo Komodo, whose artwork was created by Nefazta, encapsulates a mystical, spiritual, and dream-like alternative reality. The title of the album invokes an image of a sacred temple, a safe place to practice one’s spirituality, which is then starkly contrasted with the image of a Komodo dragon, famous for its power and stealth. Another major inspiration for the album was the Ouroboros, a Greek mythical image of a dragon eating its own tail. Much like the eternal and cyclical image of the Ouroboros, Templo Komodo embodies this sensation through its own cyclicity. The opening song, “Luna Munay”, and the closing “Burbujas”, are connected musically, allowing the album to be continually played on a loop.

“Luna Munay”, a collaboration with Colombian artist, Lalo Cortés, musically sets the scene for the entire concept of Templo Komodo. With its sparse musical accompaniment and complex, haunting vocals that are tangled in polyphony, “Luna Munay” resembles that of a sacred song, a backdrop to a spiritual ritual. The inspiration behind this piece of work came from Briela’s personal experience during an all-female healing ceremony with her mother in Pasto: “I realised all of those women were inside myself. The old one is inside you. The young one is inside you. The mother is inside you. So I imagined all of those voices as all of those women … going with the same energy. In the end, it’s common energy.” It is this common energy that radiates when listening to “Luna Munay”.

Taking inspiration from the natural landscape of her hometown, Briela makes reference to the Galeras volcano, a major landmark for the town of Pasto, and its connection to spiritual healing and awakening. Take, for instance, “Quesquequerés”, the second track on the album that implicitly deals with this image in the lyrics. Not only this, but “Quesquequerés” is a fine example of the use of traditional Pasto rhythms that are lightly scattered throughout the album. Utilising rhythms such as son suerño connects Templo Komodo to the artist’s homeland, ingraining further the notion of ‘going home’ as a process linked to tranquillity and calmness.

One of the most significant elements of the album is Briela Ojeda’s ability to paint mystic images through her use of words and highly ornamented lyricism. “Liviana” and “Templo Komodo” are two songs on the album where Briela’s poetic writing truly shines. The power of the lyrical imagery is subtly supported by a clean-cut, electric guitar accompaniment, which converses in a playful way with the vocals. Stripping it right back, Briela’s ability to use simply her voice and guitar in order to guide her musical poetry is another characteristic that makes this album so memorable. In true Briela Ojeda fashion, the lyrics of the penultimate song, “Templo Komodo”, bring us even further into the dream-like state that this album induces and perfectly wraps up this vulnerable and intimate album.

The entire introspective and reflective impression that is left on the listener is certainly no accident. Much like her own spiritual awakening in the year 2020 in her hometown of Pasto, Briela invites us all to engage with our own beliefs, emotions, and spirituality: “The idea is that maybe I can lighten up your mental cinema… I want to play with the psyche of the people like imagination and emotion, that’s a whole piece of work that I do in order to take this person to this emotional place.”

Templo Komodo is released by In-Correcto